Icon of St. Michael the Archangel by Sister Blandina Venerated in the Shrine of the Holy Face of Manoppello

During the Novena for the Feast of St. Michael the Archangel

Posted by Raymond Frost at 7:56 AM No comments: 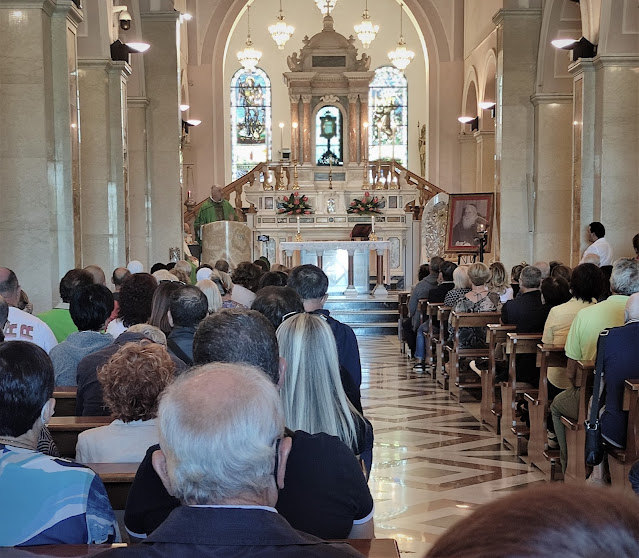 Father Domenico da Cese was remembered in the Basilica of the Holy Face of Manoppello on the 44th anniversary of his death which took place on  September 17, 1978 in Turin where he had gone for the exposition of the Shroud.

The Mass was celebrated by Fr. Paolo Palombarini who recalled the long stay of Fr. Domenico in Manoppello during which he lived in constant contemplation of the Holy Face. In reality Fr. Domenico accomplished quite a bit more. 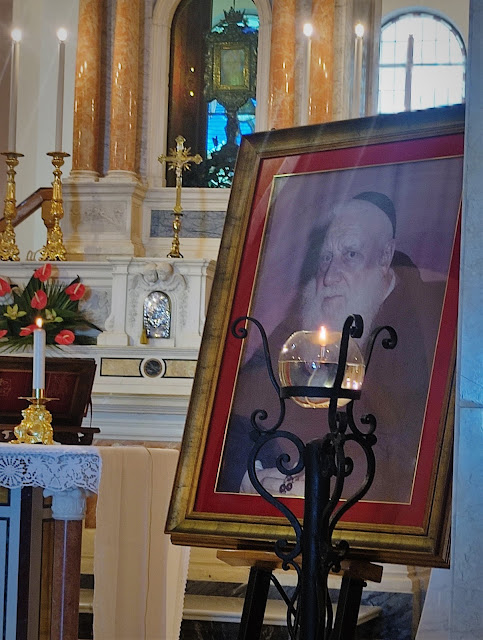 Numerous devotees traveled from Puglia, Lazio and a number of other places. Many had not been to Manoppello since 2019, before Covid. Some inquired about the death of Br. Vincenzo D’Elpidio, remembering him for his many years as the director of groups of devotees of his friend Fr. Domenico. Among these groups, perplexities have arisen over the failure to start the beatification and canonization process for Fr. Domenico during the over seven years which have followed the Nulla Osta (Nihil Obstat) granted on March 3, 2015 by the Congregation for the Causes of Saints. After such a long time, the archbishop of the diocese of Chieti-Vasto has not yet established the "diocesan tribunal", to be appointed for the examination of the numerous testimonies received by the Capuchins. 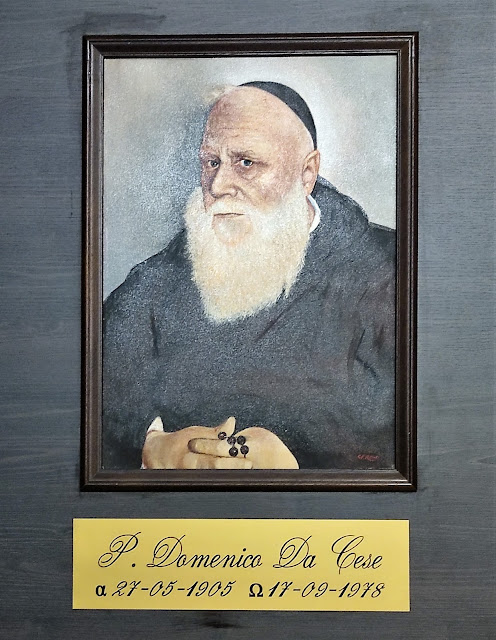 Among the news regarding Father Domenico, it should be noted that in recent days a painting portraying Fr. Domenico, commissioned by the Capuchin Fathers, a work of the painter G F Renzi, is now on permanent display in the room leading to the exhibition on the Holy Face. A plaque records the dates of his birth and death. Also present for the commemoration was the Polish journalist Aleksandra Zapotoczny, close to Pope John Paul II, who is about to publish a book on the Capuchin.

Posted by Raymond Frost at 12:41 PM No comments:


The 44th anniversary of the Transitus of Padre Domenico da Cese, Apostle of the Holy Face, will be commemorated this coming Sunday September 18 with an 11am Holy Mass at the Shrine of the Holy Face, Fr. Paolo Palombarini, OFM, Cap. presiding.
Posted by Raymond Frost at 3:51 PM No comments:

This photo reveals the Holy Face with its most mysterious and astonishing quality of invisibility  and shows the humility and hiddenness of Jesus.  He is there!  He is everywhere!  The Lord of the Universe! 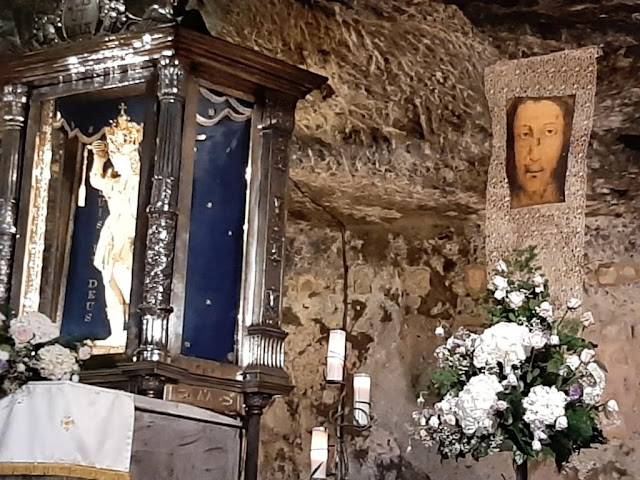 Posted by Raymond Frost at 7:46 PM No comments:

Feast of the Transfiguration of the Lord at Manoppello 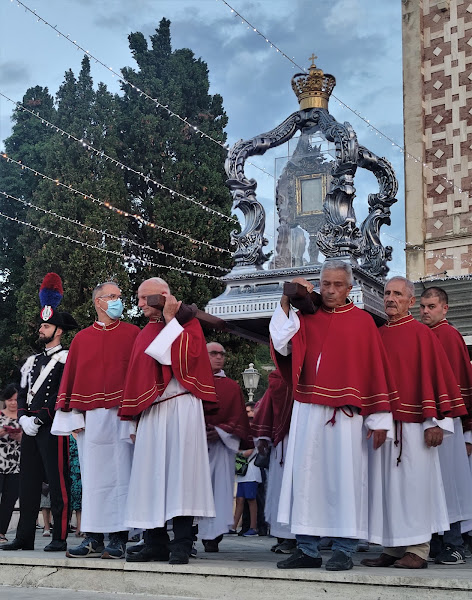 text and photos (except as noted) by Antonio Bini
On 6 August the annual feast was celebrated with solemn Masses. the morning Mass being presided over by Bishop Antonio D'Angelo, titular Bishop of Cerenza and Auxiliary of the Metropolitan Archdiocese of L'Aquila, and the afternoon by Fr. Matteo Siro, minister of the Capuchin province of Abruzzo, Lazio and Umbria. 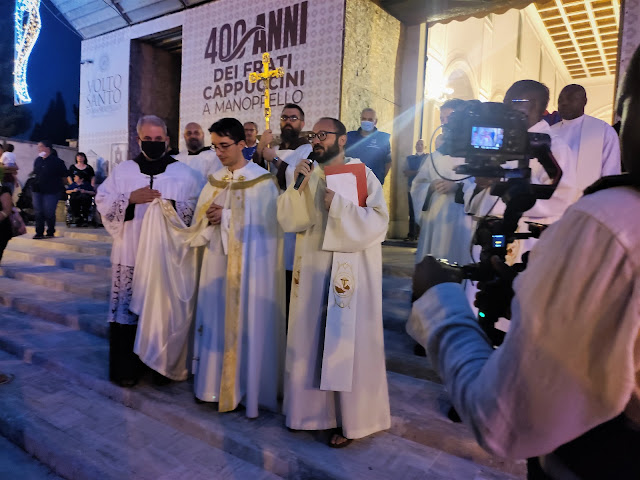 Fr. Siro and Fr. Gentili
The celebrations were attended by thousands of people, including the procession which - this year - on the initiative of the rector Fr Antonio Gentili, was extended to follow the entire course of the Via Crucis. Among the various religious present was the former rector of the Shrine Fr Carmine Cucinelli.
This year the festival coincided with the enthronements of the Holy Face in the Vancouver British Columbia area churches of St. Francis de Sales of Burnaby (pastor Fr. Mark McGuckin) and of St. James parish Abbotsford (pastor Fr. William Ashley). Both enthronements saw the participation of Fr. Bonifacio (Ted) Lopez, of the diocese of Rome and assistant to Cardinal Antonio Luis Tagle. 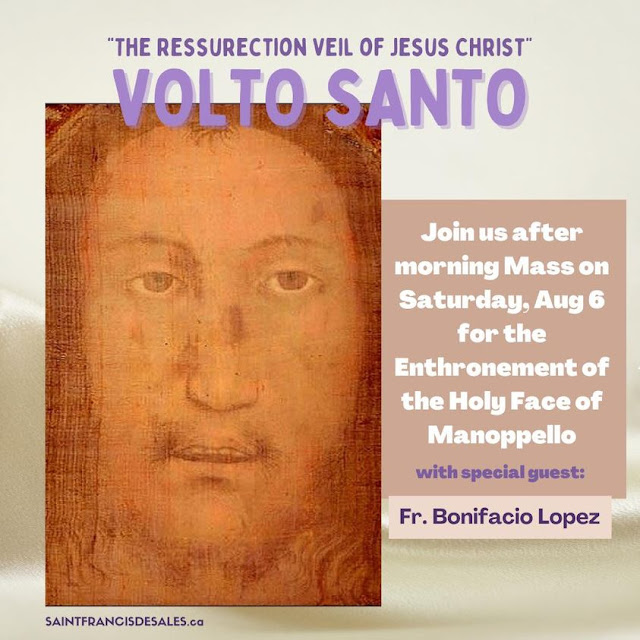 The enthronements are due to the work of The Canadian Apostolate of the Holy Face of Vancouver, following the example of the late Daisy Neves. On the same day, the Holy Face was enthroned - by an anonymous pilgrim - in the Grotto of Saint Michael in Monte Sant’Angelo, with the support of the rector of the famous shrine, Fr. Ladislao Suchy. The enthronement was limited to the day of the feast. (attached photo)
Posted by Raymond Frost at 6:59 PM No comments:

Thousands of People at the May Celebration of the Holy Face

Text and photos by Antonio Bini (except as noted)

In 2020 and 2021 the May celebration of the feast of the Holy Face was scaled down due to the pandemic, with the suppression of the procession, which in ordinary times was always attended by many devotees and companies of pilgrims. But the strong desire to maintain, even during the emergency conditions, the centuries-old continuity of the feast had allowed only for the transfer of the Holy Face - by a small civil defense truck - to the church of San Nicola, in the center of the town, to the church where the anonymous pilgrim in the sixteenth century entrusted the Holy Face to Dr. Leonelli.

The celebration of Mass the past two years was also scaled back and access to the church limited to just 78 people. This year, however, thousands of people arrived for the feast of the Holy Face, on May 15 and May 16, which was certainly not less than in the years before the pandemic. It was difficult to enter the church, with many people having to remain outside.

We noticed a number of pilgrims coming from abroad, Poland, Germany, France, etc. I managed to exchange some impressions with the religious Benjamin Koulagna (in the photo), who accompanied a group of pilgrims who came to Manoppello from Paris, thanks to the French Catholic organization Etoile Notre Dame. His emotion was palpable. He told me that it was the first time he had seen the Holy Face in person, receiving the feeling that the sacred image almost wanted to speak to him. In his hand he had the text of Benedict XVI's prayer dedicated to the Holy Face and carried a red rose, like other members of the group. 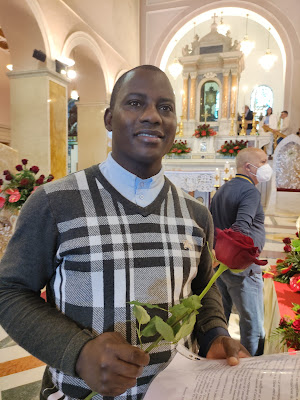 The children dressed as angels returned to open the procession, followed by the band. On the balconies of the centuries old houses of Manoppello, the most precious embroidered blankets were exhibited by families, a number of whom also had a supply of rose petals which they showered down upon the Holy Face as it passed by. 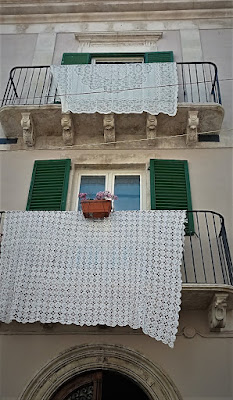 Easily noticeable was the widespread feeling of serenity, peace and festive devotion among the crowds of people who inundated the town and the road connecting with the Shrine, eager to participate in the festival as in the past.

Many mayors of neighboring towns  participated in the event together with the mayor of Manoppello, Giorgio De Luca,. In this period the municipality of Manoppello is engaged in nonstop work to improve the roads and parking near the Shrine, in preparation for the Jubilee of 2025.

The fireworks returned at the halfway mark along the route, both on the journey toward the Church of San Nicola and on the return to the Shrine. The influx of pilgrims was favored by the summer climate of the days.

On both days the provincial father Fr. Matteo Siro was present. The entire Capuchin community was in attendance, led by the rector Fr. Antonio Gentili. On Monday, after the Mass celebrated by the Archbishop of Chieti, Mgr. Bruno Forte, with the participation of the parish priest Fr. Girolamo De Rose, Fr. Antonio Gentili and other religious, including the former superiors of the Shrine, Fr. Germano di Pietro and Fr. Carmine Cucinelli, the Holy Face was brought back in procession to the Basilica, through the streets of the town, accompanied by prayers and hymns.

To give the opportunity to the largest number of people to follow the event, for the first time the entire procession was broadcast live streaming on the Facebook page of the Basilica of the Holy Face thanks to the footage of Angelo Vorraro, who is part of the Volunteers of the Holy Face (in the photo). And many have connected from various parts of the world with the FB page of the Basilica.

Present  also was Sister Blandina Paschalis Schlömer and the author Paul Badde, engaged as always in the taking of a number of photos of the Holy Face. Among his many photographs I point to one from May15 - with the consent of Paul himself - in which the Holy Face, which never ceases to surprise, seems to present extraordinary similarities with the Face of the Shroud, demonstrating the infinite changeability of the exceptional image.

It was almost as if the celebration had blissfully canceled the difficult period of the pandemic and Manoppello is ready to welcome the great flows of pilgrims as was the case until a few years ago. 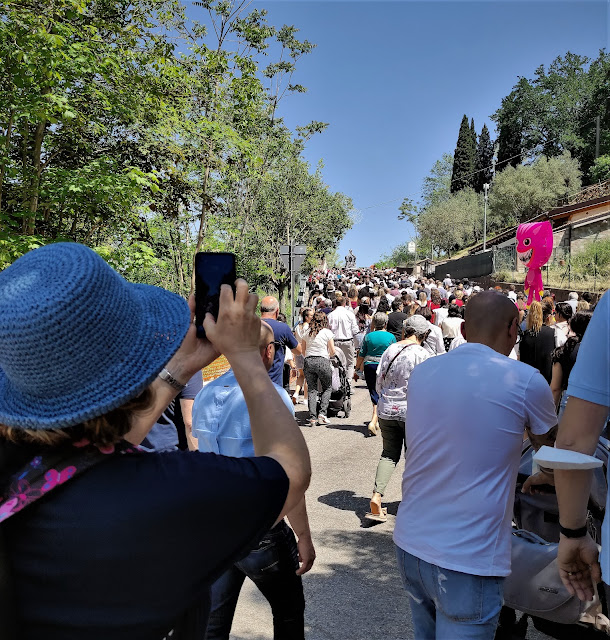 Posted by Raymond Frost at 8:12 PM No comments:

Feast of the Holy Face Began This Morning at the Basilica

Link to a Video, recorded at the Basilica this morning, of the Complete Service of the Solemn Exposition of the Holy Face which was broadcast live on the Facebook page of the Basilica  Morning https://www.facebook.com/basilicavoltosanto/videos/4626531547446902

The video below was filmed this morning by Ramona Robben

Posted by Raymond Frost at 7:22 PM No comments: