Devotion to Father Domenico of the Holy Face 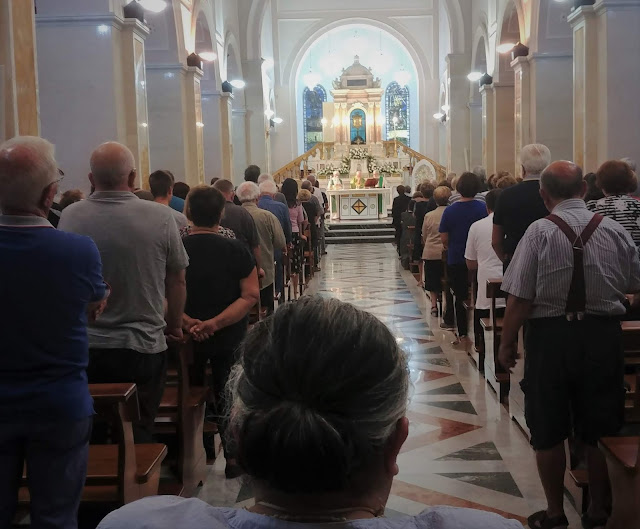 The Servant of God commemorated at Manoppello on Sunday September 16 -- forty years after his death, also with the introduction of a book on his life.

"The passage of time, instead of weakening his memory, shows an ever greater following, even by people who did not know him in life". A quote from the amazed vice-postulator of the cause of beatification, Fr. Eugenio Di Gianberardino and the Rector of the Sanctuary, Fr. Carmine Cucinelli at the end of the event organized in the Sanctuary of the Holy Face of Manoppello, to remember Father Domenico da Cese (1905-1978), forty years after his death as a result of a road accident in Turin, where he had traveled for the exposition of the Shroud.

The celebration of the Mass was preceded by a meeting attended by many people who came to Manoppello from every part of Italy and also from abroad to testify to their devotion to Fr. Domenico da Cese, also by providing written statements. There were even pilgrimages specially organized from Ruvo di Puglia, Andria and Civitavecchia.  So many came that in the San Damiano hall, adjacent to the basilica, that the closest devotees linked to the figure of Capuchin from the Italian land of Marsica could hardly enter.

Introducing the meeting, Fr. Carmine Cucinelli illustrated the complex process begun in recent months to give a burial in the Basilica of the Holy Face to the mortal remains of Fr. Domenico da Cese, for whom a special project was begun, recalling that the issue arose in the days immediately following the death of his confrere. In fact, from a letter recently found in the archives of the friary, it emerges that the spiritual assistant of the Association of the Holy Face of Ruvo di Puglia, Don Vincenzo Amenduni, on October 30, 1978,  expressed warmly, in the name of a community of faithful larger than the same association, the desire that the body of the beloved Father Domenico da Cese find its resting place in the Sanctuary of the Holy Face of Manoppello. In this regard it seems interesting to grasp the reasons that the priest, on behalf of the associates and other faithful, supported the request, recalling that "Father Domenico carried out his religious and priestly activity in the Shrine, remaining permanently bound to the zeal with which he spread the devotion to the Holy Face making himself a wise moral and spiritual guide of those who saw in him a generous father who spared no effort for the formation of many faithful coming to Manoppello from every part of Italy and Europe ".

These seem to be expressions that represent the extraordinary relationship between Fr.Domenico and the Holy Face, of which he was a tenacious and passionate disseminator, in the certainty of its authenticity, which appears inseparable from him- yesterday as today - even to those who only recently came to know or study the figure of the friar and the story of the Holy Face, re-emerged from oblivion and recovering its significance in the history of Christianity only in recent years.

The same Fr. Carmine himself gave an affectionate thanks to the nephew and nieces of the Capuchin for having consented to the transfer of the remains of Fr. Dominic from the private chapel of the cemetery in Cese, with a joint letter in which they said they were certain that his will was to remain close to his beloved Holy Face. After the Congregation for the Causes of the Saints in 2015 recognized the Capuchin as Servant of God, there was placed in the hall for ex-voto a giant portrait of Fr. Domenico with a copy of the Holy Face in his hand, alongside a visitors book open to those who arrive at the Sanctuary, continuing to follow his teaching.

Fr. Eugenio then opened the floor for the exposition of numerous testimonies of devotees, regarding miracles, or of personal experiences of extraordinary events, also by people who have come to the knowledge of Fr. Dominic only in recent years, as for example, a lady from Taranto, who told the dramatic case of a relative. Several personal and family histories are different and even unique, even of children who tell the story of their parents, like the joy at the arrival of the letters from Fr. Domenico,his constant invitation to prayer and the veneration of the Holy Face. The overcoming of the effects of serious traffic accidents, as told by a lady who came from France and other very serious pathologies, faced with prayer and with the perceived closeness of the Servant of God. Others have once again presented the mysterious relationship between Fr. Domenico and Padre Pio from Pietrelcina, with stories that surpass any ability to understand according to the ordinary mechanisms of human reasoning. The intervention of Fr. Eugenio has often offered calm reflections on the religious level with respect to individual testimonies. 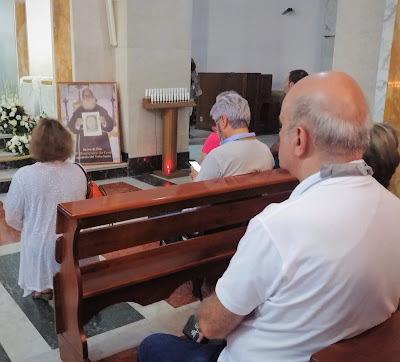 Among the various religious gathered, the emotional presence of Fr. Luciano Antonelli and Fr. Pietro De Guglielmo, confreres of the unforgettable Fr. Domenico in the convent of Manoppello in that distant 1978. The former (now in L'Aquila) was the superior, while the latter (now in Penne) was commissioned to go to Turin to assist the dying Fr. Domenico.

Particular affection has been shown by many people towards Br. Vincenzo d'Elpidio, present at the event, who was a friend of Fr. Dominic and who for years has been committed to supporting the cause of beatification of the confrere, which he knew well, the extraordinary charisma, simplicity, total availability to the humble and suffering and his untiring dedication to the cause of the Holy Face, which had also brought him to Turin on his last trip, with the tragic epilogue that he would have foreseen. We heard the old friar confiding to some people who greeted him familiarly of his desire to attend the burial of Fr. Domenico in Manoppello before leaving this earth. 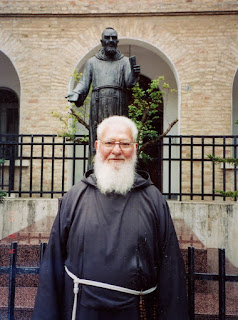 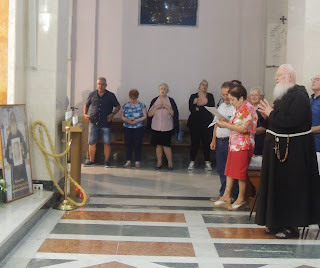 Also in attendance at the event was the journalist Aleksandra Zapotoczny, who collaborated in the process of canonization of John Paul II and who recently published the book "Live within us", also published in Italy by Mondadori and containing an interesting review of testimonies that led to the beatification of the Polish Pope.

This is an interesting biography of the Apostle of the Holy Face, told through a rich series of photographs and documents, largely unpublished, that the author has been able in recent years to collect and arrange in the friary of Manoppello, and coming also from time spent in other friaries, including Avezzano, Penne, L'Aquila (where he was also chaplain in the local hospital), Vasto, Sulmona, Luco dei Marsi, Campli, Caramanico Terme, before his assignment to the friary of Manoppello, which took place in 1966.  For the first time some events are related of the period in which Fr. Domenico was a military war chaplain in Trieste and then in the territories of the former Yugoslavia as well as a series of interesting articles published in the Austrian Catholic magazine "Grüß Gott" whose editor, Ms. Ida Loidl, organized pilgrimages to San Giovanni Rotondo and Manoppello when Fr. Domenico was alive.

The publication, introduced by the writer Paul Badde, is destined to open further research perspectives on the life of the friar. Circumstances that make us reflect on what the Fr. Domenico claimed when he said he did not want anyone to talk about him, something that could only be done after his death.

Posted by Raymond Frost at 3:37 PM No comments: