"The church of the Madonna of the Seven Sorrows was packed with devotees from various parts of Italy.  One of the speakers, 85 year old Fr.Guglielmo Alimonti,  who was very close to Padre Pio and remains an adviser at the national level for the Prayer Groups of Padre Pio, said clearly that in Padre Domenico da Cese one could glimpse the same characteristics as those of Padre Pio." 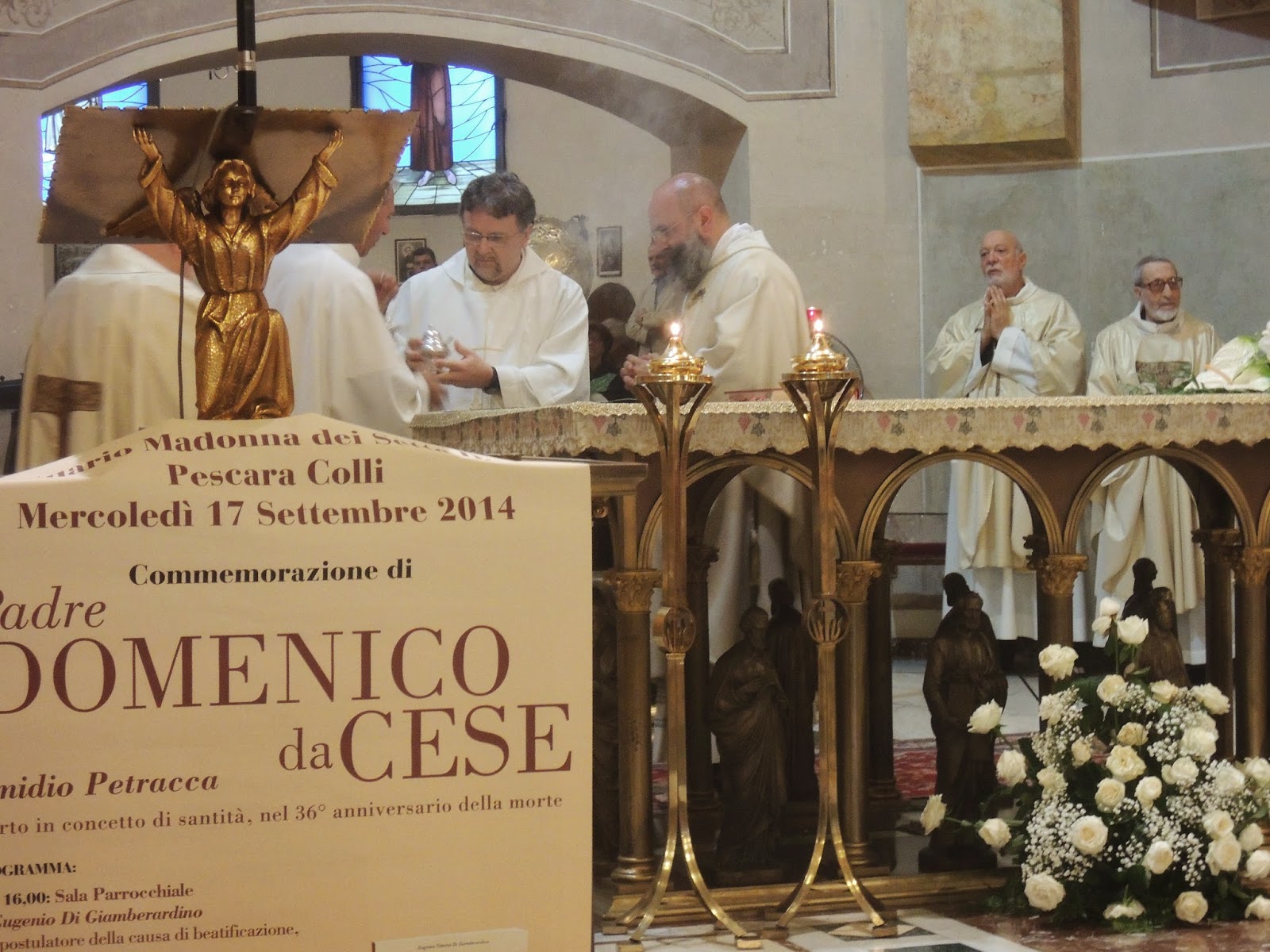 "Solemn Mass for Padre Domenico at the Shrine of the Madonna of the Seven Sorrows .  The main celebrant, Fr. Carmine Ranieri the provincial of the Capuchins of Abruzzo, is seen at the altar." 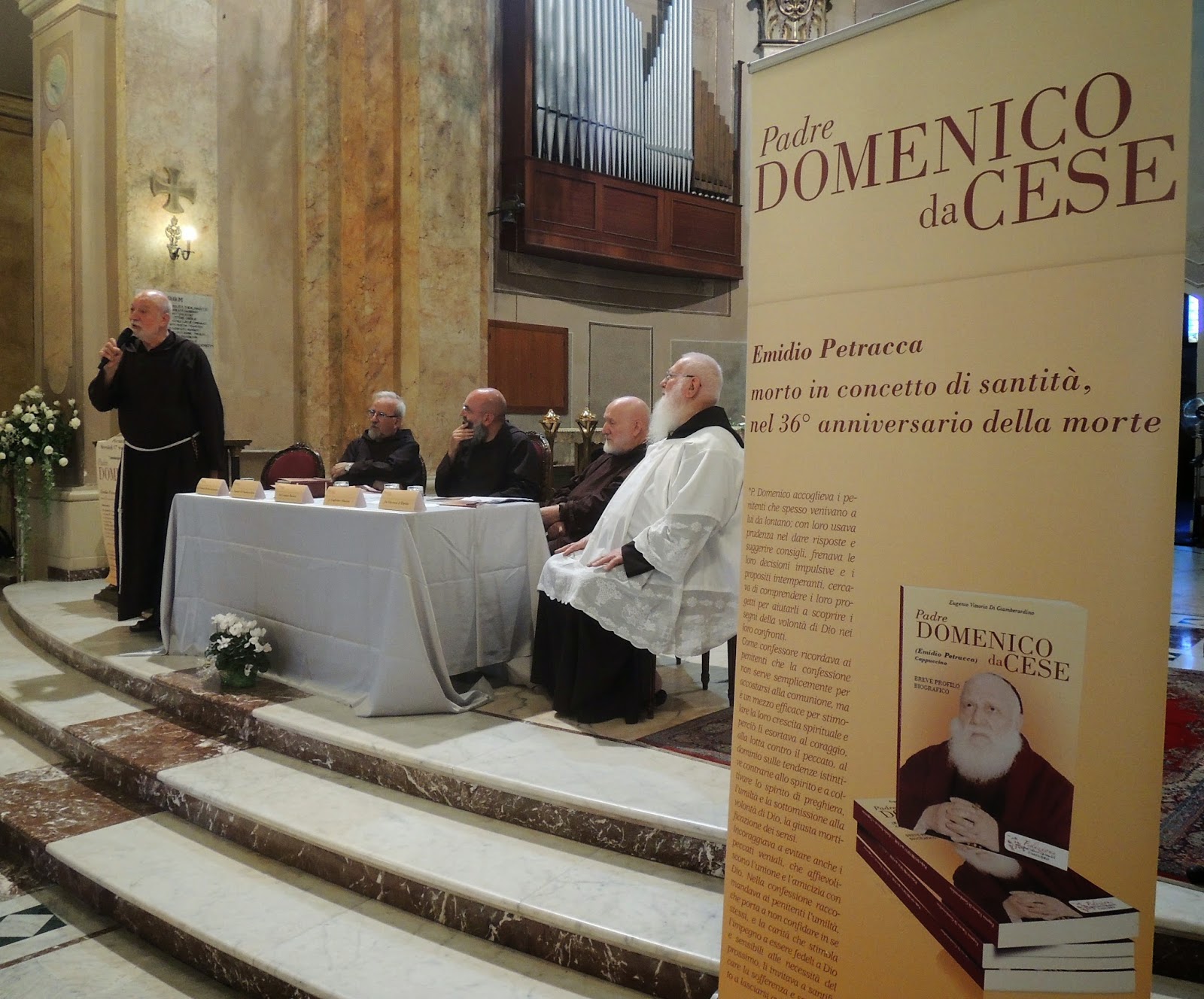 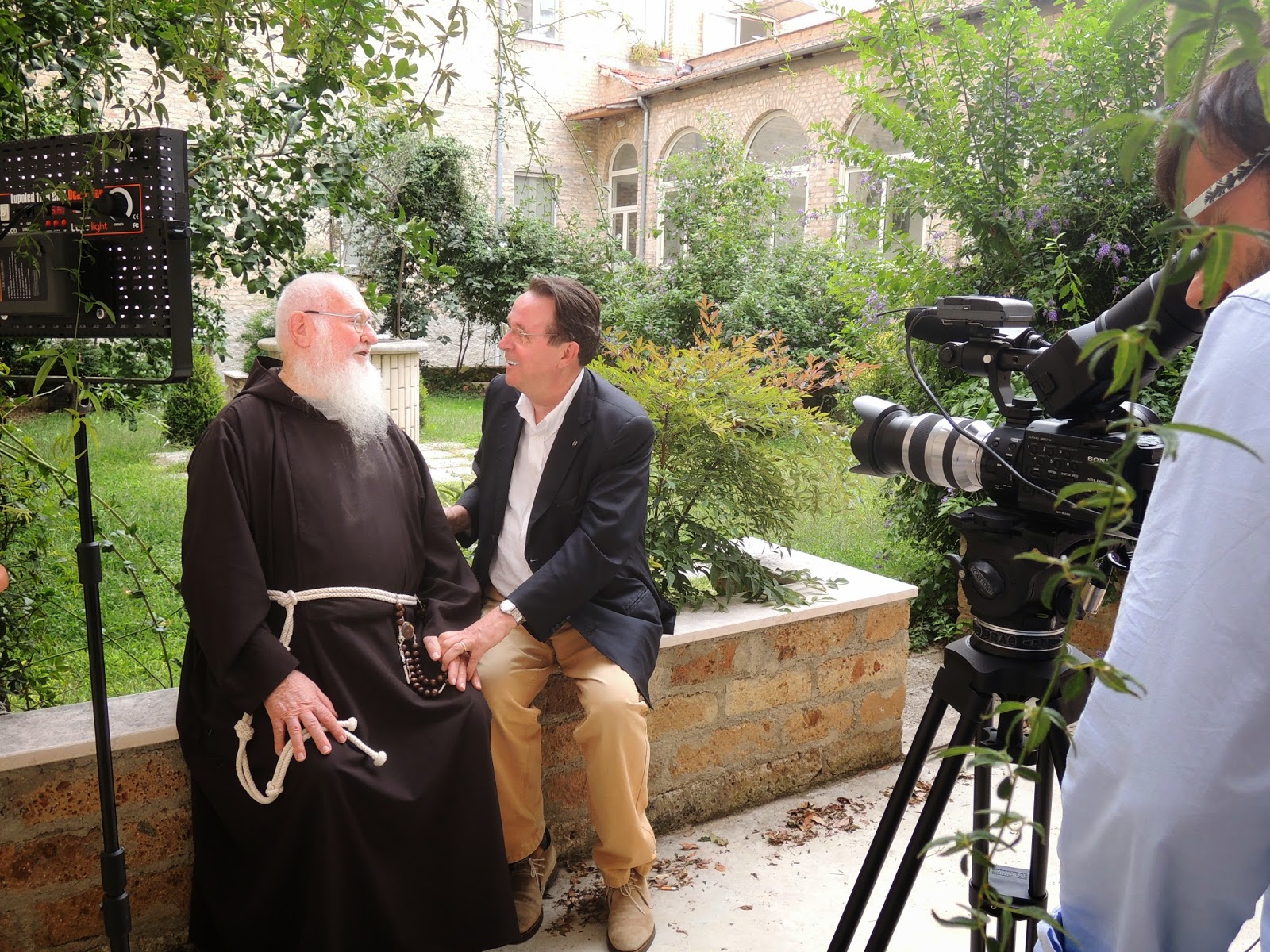 "Paul Badde interviews Brother Vincenzo D'Elpidio, Padre Domenico's friend and a supporter of his cause for beatification,  in preparation for an EWTN program on the life of Padre Domenico." 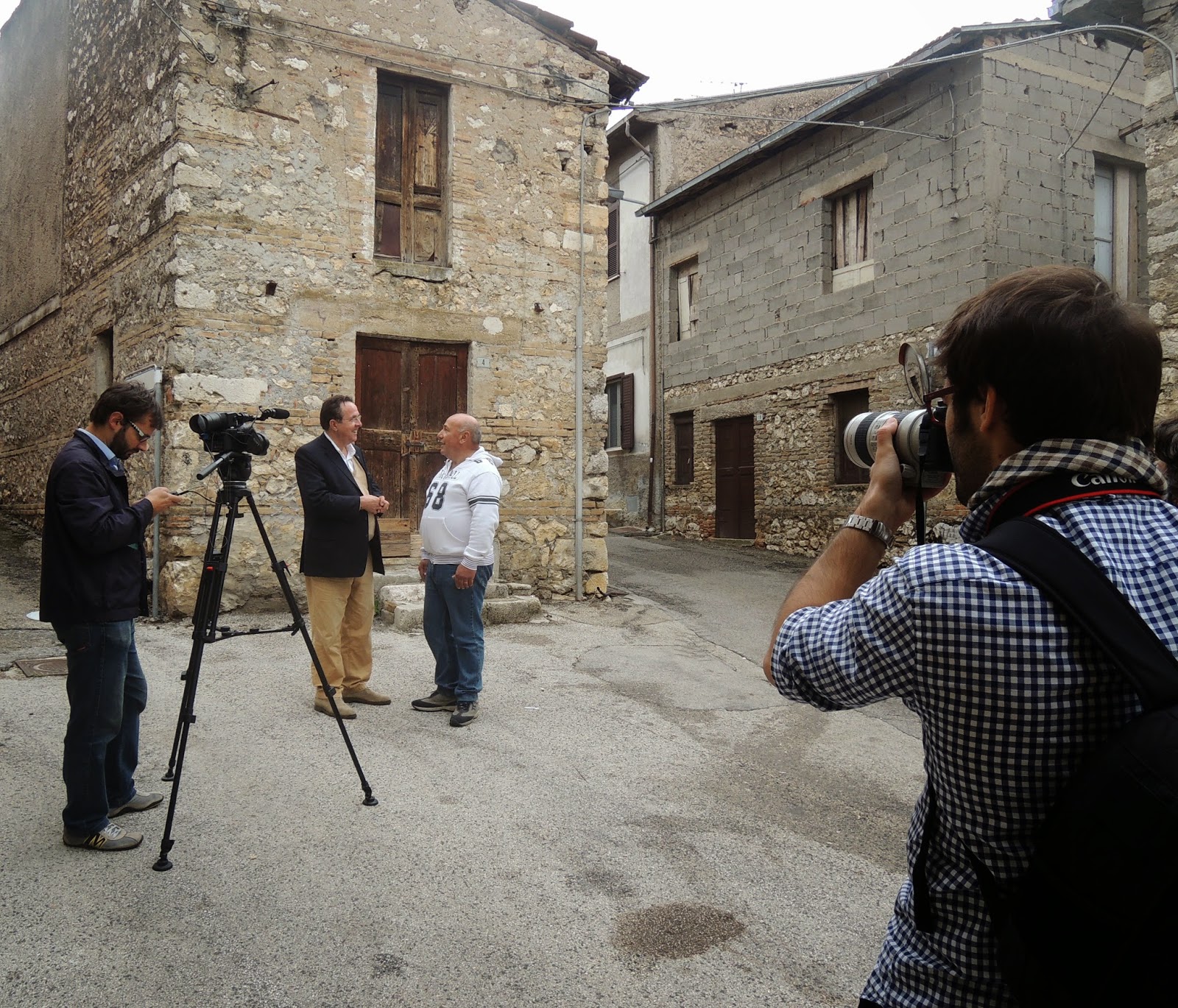 "Interview with Giovanni Petracca, nephew of Padre Domenico, outside the home in Cese where Padre Domenico was born."
Posted by Raymond Frost at 7:58 AM No comments: On September 17, the 36th anniversary of the death in Turin of Padre Domenico da Cese, O.F.M., Cap., beloved rector of the Shrine in Manoppello during the 1970's and often simply known as Padre Domenico of the Holy Face, the Capuchins of Abruzzo will hold a conference on his life at the Shrine of the Madonna dei Sette Dolori (Madonna of the Seven Sorrows) in Pescara Colli.

The conference includes the launch of a biography on the life of Padre Domenico written by the vice-postulator of the cause for his beatification, Eugenio Di Giamberardino, who is also the author of "The Holy Face of Manoppello -- Tradition, History, Science and Devotion".

During the conference, which begins at 4pm, there will be a talk by Fr. Giamberardino to introduce the biography of Padre Domenico as well as talks by Fr. Carmine Ranieri, Provincial Minister of the Capuchins of Abruzzo, by Fr. Vincenzo di Marcoberardino, Fr. Guglielmo Alimonti, Brother Vincenzo D'Elpidio among other fellow Capuchins of Padre Domenico. The program will conclude with a concelebrated Mass presided by the Provincial Minister.

It is noteworthy that this program to commemorate the life of Padre Domenico is being held on the day on which concludes the Mission for the Holy Face to the USA and the Philippines which is being conducted by Fr. Carmine Cucinelli, the rector of the Shrine of the Holy Face of Manoppello.

Bishop Luca Brandolini of the Diocese of Sora-Aquino-Pontecorvo composed and published the following prayer in 2006 for the beatification of Padre Domenico. 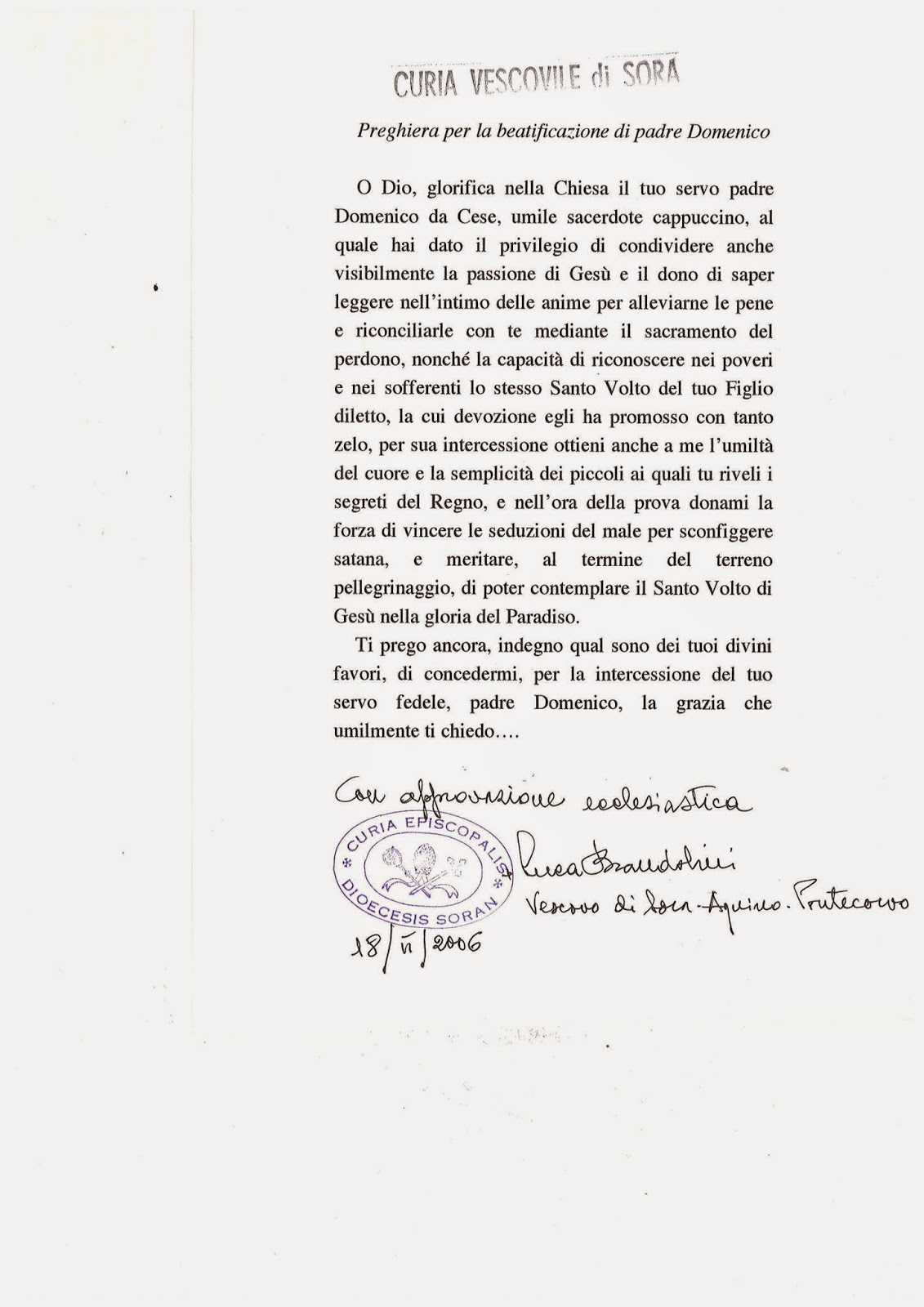 O God, glorify in the Church your servant Father Domenico da Cese, humble Capuchin priest, to whom you gave the privilege of sharing also visibly the passion of Christ and of being able to read into the hearts of souls in order to relieve their burdens and to reconcile them with you through the sacrament of pardon, as well as the capacity of recognizing in the poor and the suffering the very Holy Face of your beloved Son, whose devotion he promoted with such zeal, through his intercession obtain for me the humility of heart and the simplicity of the little ones to whom you have revealed the secrets of the Kingdom, and in my hour of trial give me the strength to overcome the seductions of evil in order to put Satan to flight, and to merit, at the end of my earthly pilgrimage, to be able to contemplate the Holy Face of Jesus in the glory of Paradise.

Though unworthy as I am of your divine favors, I ask that you might grant, through the intercession of your faithful servant Father Domenico, the grace that I humbly ask of you...

Posted by Raymond Frost at 11:03 AM No comments:

Posted by Raymond Frost at 7:11 AM No comments:

The Second Part of the Mission by Fr. Carmine Cucinelli begins in the Philippines 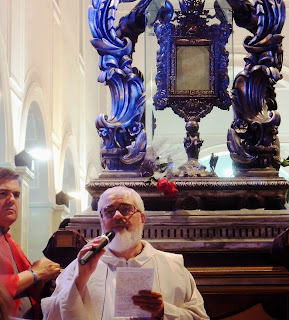 photo and text by Antonio Bini


The Episcopal Conference of the Philippines, headed by Socrates B. Villegas,  announced the mission of the Shrine of the Holy Face in the Philippines with a statement made public on September 5 on its corporate website http: //www.cbcpnews.com / cbcpnews /? p = 40792 -

This comes as a recognition of sharing and support for the program of spreading the knowledge of the Holy Face in a country, the Philippines, which which has the highest number of Catholics in Asia. Out of a hundred million people, Catholics represent about 70% of the population.

It should be recalled that in the preparatory phase of the mission,  Archbishop Bruno Forte of the Archdiocese of Chieti- Vasto where the shrine is located, had contacted the bishops of each diocese included in the pastoral program.

The statement noted that "the faithful Filipinos will have the opportunity to venerate what we consider the imprint of the face of the Lord." In fact, it is a reproduction of the Holy Face and the original remained in the Shrine in Manoppello.

The press release states that "the sacred object it is a shroud, veil or handkerchief commonly used by the Jews to cover the face of their dead to burial," recalling "the visit of Benedict XVI to Manoppello, who decided to make the visit after he had  read the book by Paul Badde. "

The statement, which makes reference to the cover of the magazine Inside the Vatican which shows an  image of Manoppello, summarizes the main characteristics of the veil, on the basis of scientific and historical research:

a) The faces of the Shroud of Turin and the cloth of Manoppello coincide;

b) both images are "acheiropoietas" in the sense that they could not be made by human hands;

c) The Veil would be dated between the time of the Lord's crucifixion and resurrection.

d) The Shroud of Turin shows the image of a man with his eyes closed and fresh wounds, while the veil of Manoppello has a face with eyes open and closed wounds.

For these conclusions are also referred to the authorities of the Church, perhaps alluding to the views and testimonies of so many cardinals.

The statement of the Bishops' Conference was picked up by radio, television and newspapers, including the Manila Times.

The program began with a visit to the studios of Catholic Radio Veritas  and then continue, as foreseen, in the Sanctuary of San Antonio, Forbes Park in Makati.

Father Carmine reported "the warm welcome received, beginning with the arrival at Ninoy Aquino International Airport in Manila. At the end of the solemn Mass in the sanctuary "- states  Fr. Carmine - "which was concelebrated by eight religious, followed by a long line of  groups of the faithful who have stayed for more than two hours before the reproduction of the Holy Face, with scenes of intense devotion, before the transfer to the city of Lipa", where he will meet today Ramon Cabrera Arguelles, Archbishop of the Diocese of Lipa. In the Cathedral of Lipa will be held a vigil throughout the night with songs and prayers.  It was also learned that in the Shrine which is being built in honor of the Virgin Mary, mother of the entire Asia, there are plans to include a  chapel of the Holy Face.

Carmine P. Ranieri, provincial minister of the Capuchin d'Abruzzo has expressed, on behalf of the Order, his satisfaction for the spiritual fruits that the mission has realized in the United States and the Philippines in the name of the Holy Face, prior to which there had been a challenging preparatory work carried out by the Shrine.

The itinerary of Fr. Carmine Cucinelli will end on September 17, although at this time the program is intensifying with further meetings, presentations and masses.

A news report on the mission of the Holy Face prepared by the newspaper Inquirer is present on Youtube  along with articles on the Mission on various sites  on the internet.


Posted by Raymond Frost at 2:39 PM No comments: 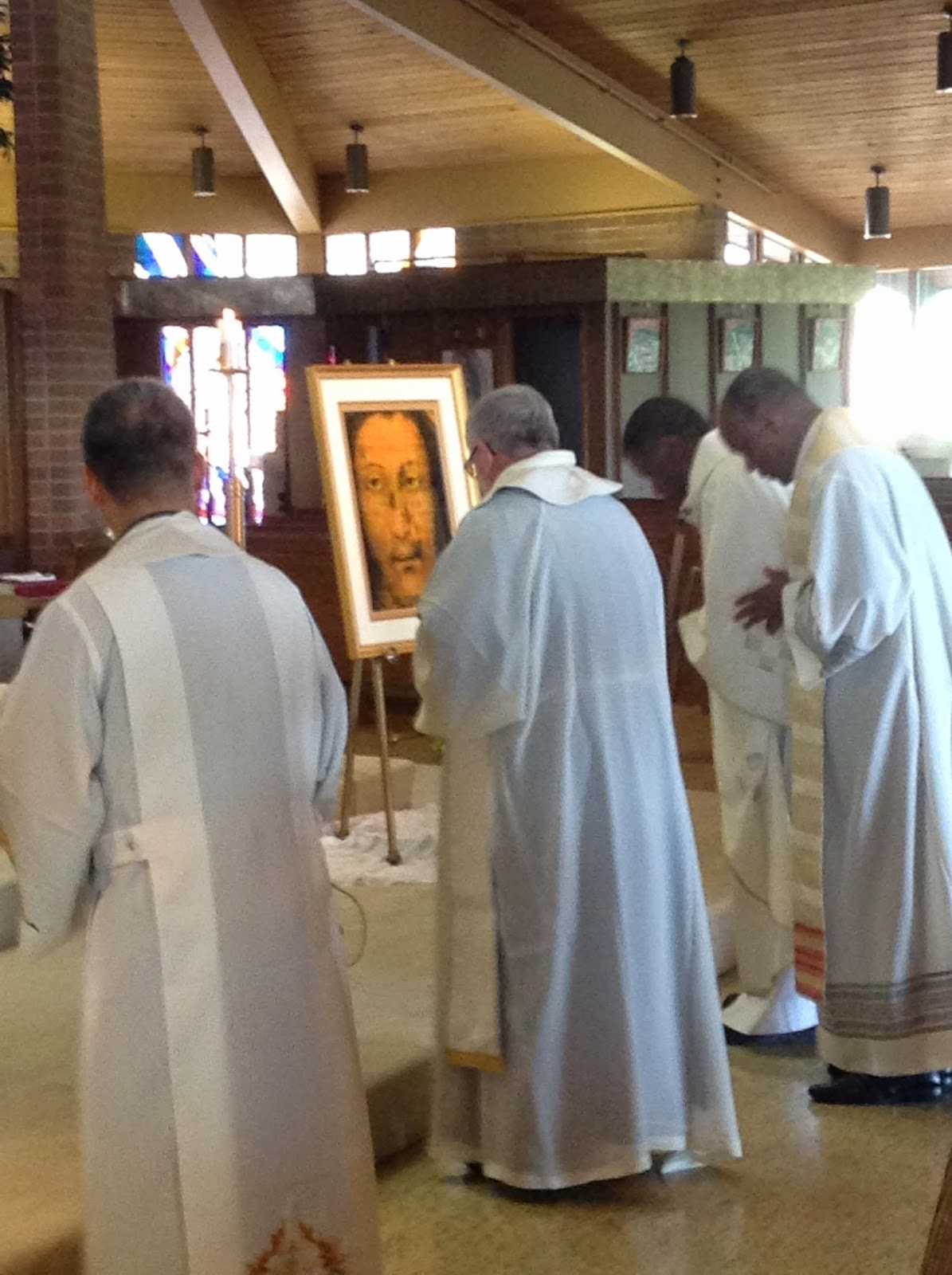 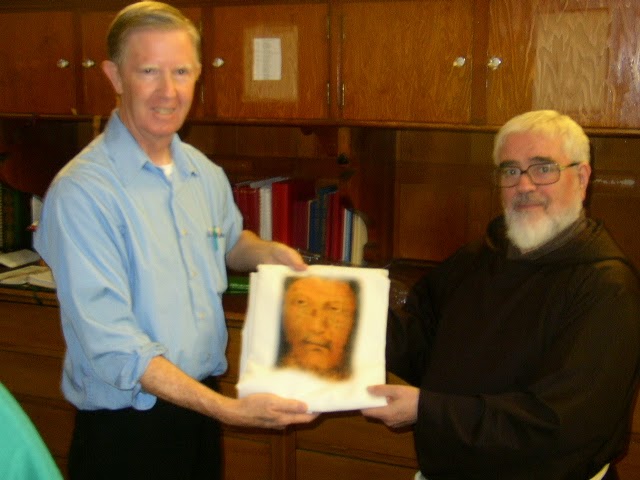 Fr. Carmine Presenting St. Ignatius Church with a Chasuble of the Holy Face of Manoppello 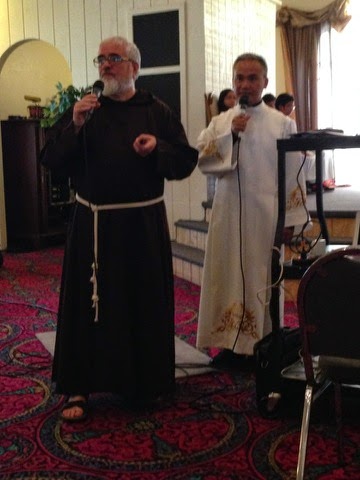 Fr. Cucinelli and Fr. Flores Presentation at the Church of St. Sharbel
Posted by Raymond Frost at 3:33 PM No comments:

Schedule of Public Celebrations for the Mission of the Holy Face of Manoppello by Fr. Carmine in the Philippines 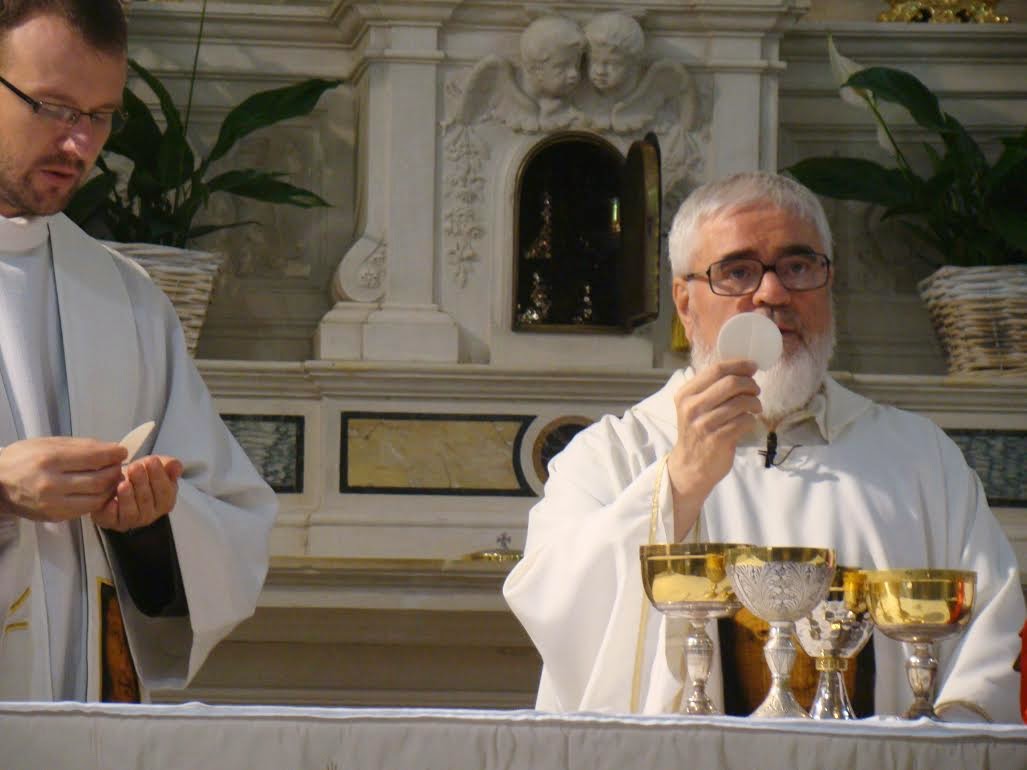 Below is a schedule for his activities starting next week in the Philippines.   Also, here is a link to a recent newspaper article from a Philippine newspaper, Business Mirror, which speaks of the Holy Face of Manoppello and Fr. Carmine's visit to the Philippines.
http://businessmirror.com.ph/index.php/en/features/faith/37986-holy-face-of-manoppello-the-resurrection-s-unequivocal-proof


9/12 – FRIDAY
Conference of the Marian Pilgrimage 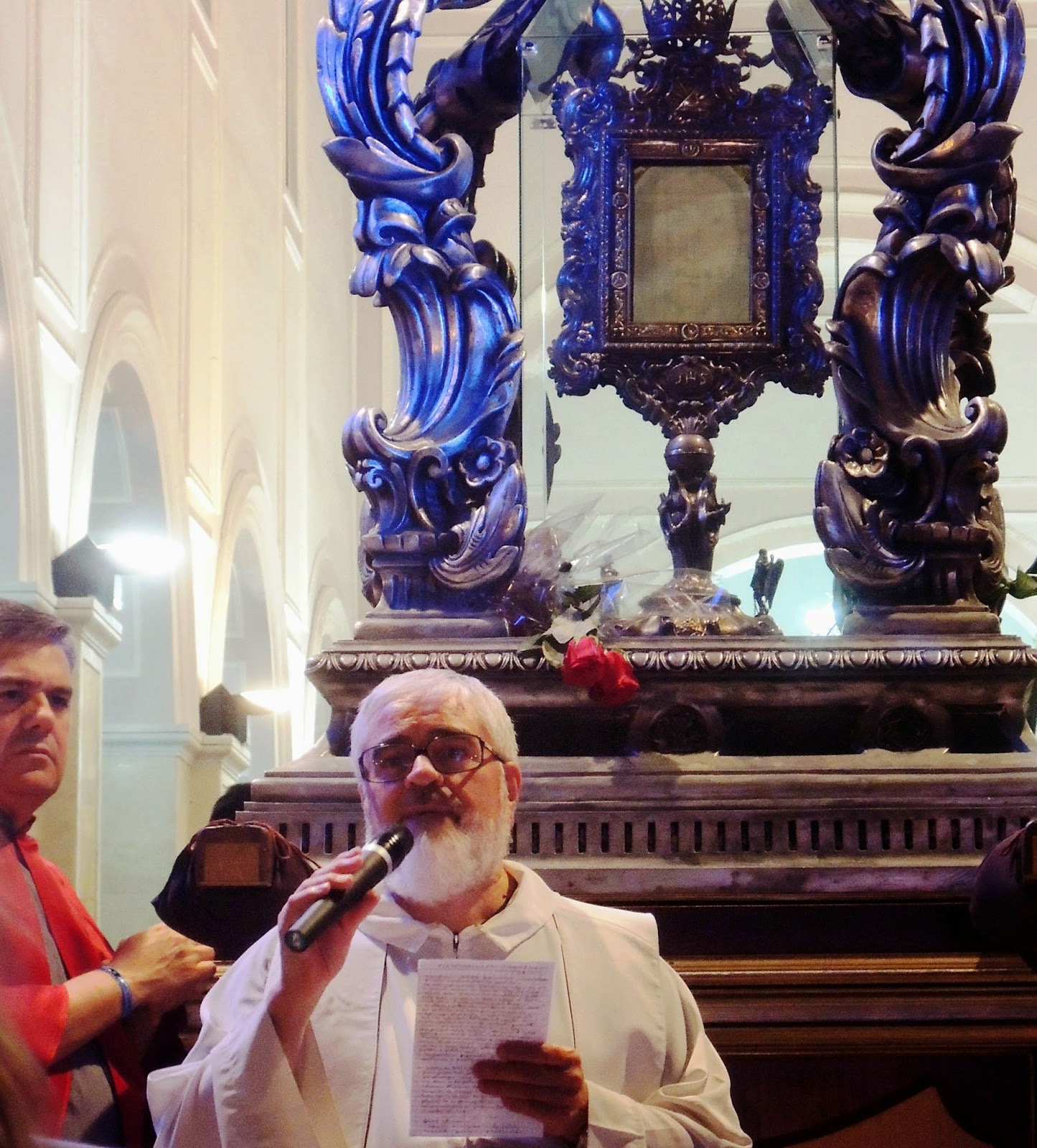 Posted by Raymond Frost at 2:00 PM No comments: