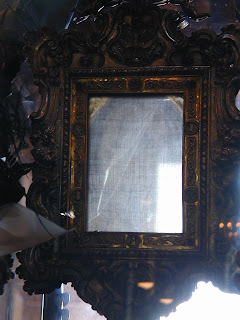 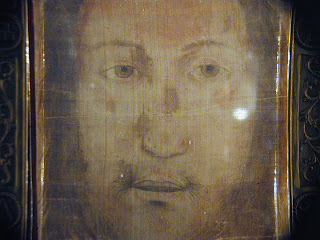 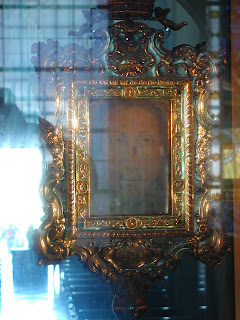 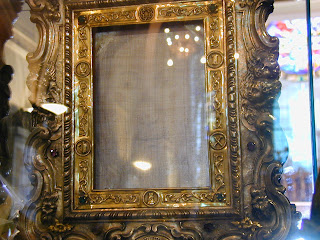 To commemorate the beginning of the year of St. Paul, here are several photos of the Holy Face of Manoppello taken by Paul Badde. It seems almost certain that St. Paul saw the cloth which is now in Manoppello.
Posted by Raymond Frost at 11:55 AM 1 comment: 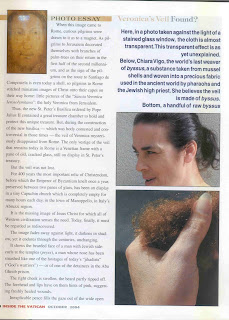 Above is a copy of a page from the english translation of Paul Badde's historic first article from the Inside the Vatican magazine which was first published in the Die Welt newspaper in Germany. It shows a photograph of Chiara Vigo and also a photograph of her holding a small clump of marine byssus. Click on the article to magnify it so it can be read. To see the entire article of Badde, go to www.voltosanto.de and click on the word zeitschriften, then scroll down and click on the photo of the magazine Inside the Vatican.

Television interviewer: From your perspective as an expert, we ask you, is it possible that the relic is made of marine byssus?

Chiara Vigo: On the basis of the result of my studies, I would say yes. The cloth presents the characteristics typical of marine byssus.

Television interviewer: Can you give us some examples?

Chiara Vigo: Principally the transparency. Marine byssus is the only fiber that allows light to pass through: it is a bronze color in the dark and a golden color if illuminated. This peculiarity is compatible with the features of the Holy Face, that disappear when light shines against it.

Television interviewer: Surely the fact that the Face disappears when light shines against it is one of the most disquieting aspects of the relic. If we were dealing with a painting the image shouldn't be visible from both sides. This aspect has been looked into by a professor from Bari, right?

Chiara Vigo: Yes, that would be Professor Donato Vittore, who has found that on the cloth there are no traces of color. Thus we can exclude the theory that the Face had been drawn by a human hand. In that sense we can say that if one would paint on marine byssus, which is a smooth and impermeable fiber, the color would tend to run and form crusts, which he has not found to be on the cloth. Marine byssus could be dyed only by a carbon bath, but this can be excluded considering the era to which it dates and that we find ourselves in Mesopotamia.

Television interviewer: What are the alternative hypotheses?

Chiara Vigo: The Face could have been obtained with a sort of decolorization. It has been discovered that lemon has a lightening effect on fabric of marine byssus. This theory becomes even more interesting if one thinks that in ancient times an emulsion of oil and lemon was used to anoint the dead.

Television interviewer: Let's turn to the theory that we find ourselves in front of the veil offered by Veronica for the burial of Jesus.

Chiara Vigo: There is some possibility. Also because the relic presents some irregularities along the border that allow us to suppose that it was transferred from one frame to another, and we know that in the Vatican there is preserved a frame similar to the one of the Holy Face. If comparing them should show that they are compatible, than there would no longer be any room for doubt.

Television interviewer: Can we say that the question is more than ever open?

Chiara Vigo: Yes, there is need for greater seriousness in the studies. It is necessary to analyze all the possible fabrics, making use of the collaboration of the Universities of Urbino and Camerino. In fact, only after an accurate examination of the fibers will the contribution of persons like me, experts in the field, be useful.

Television interviewer: Do I detect a subtle vein of criticism in your words, or am I wrong?

Chiara Vigo: Let's say yes, as a Catholic I understand the mystical leap of faith, but the only way to verify a sound theory is to undertake a scientific study which may provide objective and concrete proofs.

Television interviewer: In point of fact what do you propose?

Chiara Vigo: That the church and local officials work together to form a committee that would concentrate solely on resolving the question of the Holy Face. I think that often we can get lost in the mixing of many matters, causing the fact to be forgotten that we are dealing with the patrimony of everyone, and first of all, that of the people of Abruzzo.
Posted by Raymond Frost at 4:08 PM No comments: 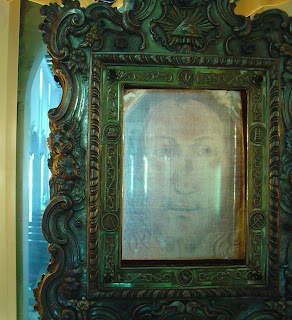 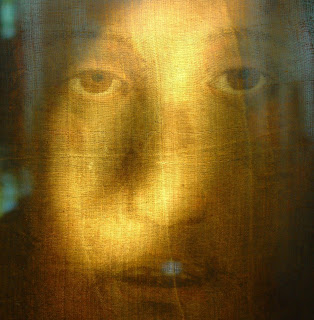 In the edition of June 22, the Vatican newspaper L'Osservatore Romano published a review signed by Damiano Pomi of a book by the distinguished scholar of art history Hans Belting entitled Il Vero Volto di Cristo "the true face of Christ" (Turin 2008, Bollati Boringhieri, 256 pages). As far as I know this book has not appeared yet in English. If someone knows differently I would appreciate being corrected. Belting is one of a group of art historians who must be known by anyone seeking to deepen their knowledge of the history of images. His work Likeness and Presence: A History of the Image before the Era of Art (Chicago 1994) is fundamental. What follows is my English translation of Pomi's review of Belting's Italian language book, the photos above are by Paul Badde.
Another part of (Belting's) text, dedicated to the representation of the body as a theme of faith, is centered on the image of the Veronica - vera icona (true icon) - paradigm of the artistic definition of the face of Jesus for a number of centuries. Beyond recounting the historical events of which the famous relic was the protagonist, an interesting perspective is delineated for the research according to which, starting exactly from the evanescent image visible on the cloth conserved in the Vatican basilica, there proceeded to be defined a new perception of the face of Christ. In the image, that tradition held was miraculously formed by the contact of the cloth with the face of Jesus, one is already able to foretaste, in a certain sense, that which could only be fully experienced after death: the vision of the face of Jesus.

This idea, widely diffused from the time of the middle ages, is testified to also in literature, in particular in the work of Dante Alighieri. In the work of his youth, Vita Nova, "new life", the celebrated Tuscan poet, writing of the pilgrims that were passing through Florence on their way to Rome to venerate the Veronica, compares them to Beatrice his prematurely deceased beloved. The pilgrims, upon arrival in Rome, would see that which his beloved was already able to gloriously contemplate: she could fix her gaze upon the One of whose true likeness the earth was in possession.

The presence of the relic in the heart of Christianity has given life to an iconography that has rendered even more vivid and real the face of Jesus: the artists that reproduced the cloth were called to furnish a recognizable expression to the indistinct features on it. A work not very easy, whether to satisfy the commissioning of the works of art, or to adequately represent a mystery never fully able to be decodified. Evocative in this vein, is the painting by Francisco de Zurbaran, preserved in the Prado of Madrid, in which a painter, holding his brush and palette, is in devout recollection before the Crucifix. Prior to placing his hands to the work, he seems to be questioning himself on how best to constitute that which is present to his eyes: the death of a man on the cross or the highest manifestation of the love of God. Will his work succeed in communicating this apparent contradiction?

The troubled history of the Roman Veronica, beginning with the sack of Rome at the hands of German lancers in May of 1527, has meant that the icon would be received less as an image and instead be largely received as a relic. The reproductions which followed the sack of Rome would usually present the holy face with closed eyes, while previously they were open: a living face which observed and not only was observed, in an exchange of looks which conferred on the one who examined closely a strong emotional impact. Through that which was held to be the true face of Christ, the person felt personally called and encouraged to redefine even his relation with himself and the reality surrounding him, inasmuch as, by means of the image, the mystery of God, in part, had been unveiled for him.
Posted by Raymond Frost at 4:16 PM No comments:

This is an interesting source of information regarding some of the problems which put in serious doubt the carbon 14 testing done on the Shroud of Turin. http://www.swissinfo.ch/eng/front/Sacred_relic_still_shrouded_in_mystery.html?siteSect=105&sid=8909646&cKey=1206968176000&ty=st
Posted by Raymond Frost at 3:06 PM No comments: 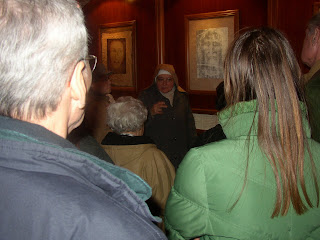 Sr. Blandina speaking to German pilgrims at the Shrine of the Holy Face in Manoppello 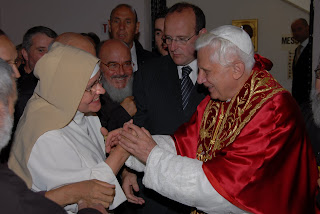 Sr. Blandina greeting Pope Benedict on the occasion of his visit to the Shrine of the Holy Face in Manoppello on September 1, 2006.