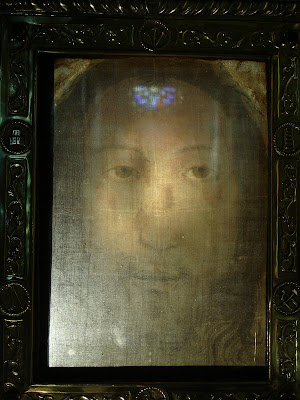 The important Catholic publishing house Ignatius Press has announced an October 2010 release date for Paul Badde's book entitled The Face of God, the Rediscovery of the True Face of God. Here is Ignatius Press' description of the book.

Best-selling journalist, historian and author Paul Badde
embarks on an exciting quest to discover the truth behind
the Holy Face of Manoppello, a relic recently rediscovered
and rumored to be the "veil of Veronica".
Vatican correspondent for German newspaper Die Welt,
journalist Paul Badde was intrigued when he heard of a
mysterious image in a remote Italian village—an image of a
man's face on byssus cloth. Byssus, or sea silk, is a rare and
delicate fabric woven from a silky filament produced by mollusks.
It is claimed that the fabric is so thin and delicate that
it is impossible to paint on—yet the image in Manoppello is
clearly visible and, moreover, when laid over the image of the
face on the Shroud of Turin forms a perfect match.
Experts determined that the cloth of Manoppello is not
Veronica's veil, but rather the face cloth layed over the face
of Jesus in the tomb. Unlike the Shroud of Turin, which is a
"negative" of the image, the image on the face cloth is a "positive"
of the face of Christ.
Paul Badde takes the reader along on a thrilling journey
of discovery as he travels to research this remarkable relic,
tracing the turbulent history of the Holy Face from ancient
times up to the historic 2006 visit to Manoppello by Pope
Benedict XVI.
THE AUTHOR
Paul Badde, born in 1948, is a best-selling author and
renowned journalist and historian. Since 2000 he has
been an editor of the German newspaper Die Welt, first
as the Jerusalem correspondent and now as the Vatican
correspondent in Rome. He is also the author of Maria of
Guadalupe: Shaper of History, Shaper of Hearts; Jerusalem,
Jerusalem and The Heavenly City.
“The results are almost beyond our imagination.”
— Bild
“Paul Badde had written a gripping cultural thriller.”
— Der Spiegel

Posted by Raymond Frost at 7:15 PM