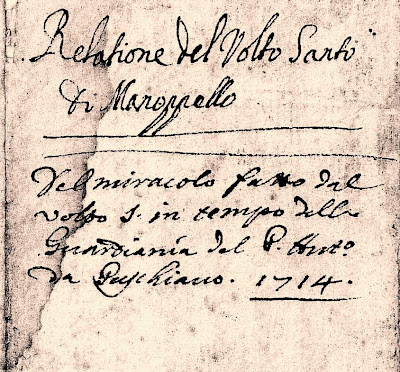 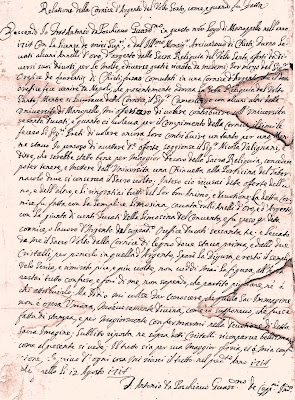 How the image disappeared and then reappeared

The testimony given to us by Padre Antonio from Poschiavo - written on August 12, 1714 - deserves to be remembered, not least of all in relation to the question of doing research by opening the reliquary which holds the Holy Face.

Padre Antonio, the father guardian of the shrine at that time, wanted to render the reliquary more sumptuous by providing a new silver frame and so took up a collection of donations of money and objects of gold and silver which were given to the shrine by the faithful who had received graces.

During the changing of the frame, Padre Antonio, who had been given permission for this work by his Ordinary (religious superior) and by the Bishop of Chieti, opened the little internal wooden frame which enclosed the Holy Face between two panes of glass, the one which had been made by fra Remigio from Rapino, who must have been an expert artisan. Fra Remigio had been called to Manoppello by Padre Clemente from Castelvecchio, the first father guardian from the time when the convent of the Capuchins was still under construction.

According to what is told in the Relatione Historica (Historical Report) of Padre Donato from Bomba, the Holy Face at that time (1618) was still in the possession of Antonio De Fabritiis, who had given his consent that Padre Clement should put in order the Holy Face which "was in the middle of a veil...maltreated and badly cared for, (which) was all wrinkled, lined and eaten by moths and worms", eliminating the ruined surfaces around the face and placing it in between two panes of glass. Such a solution took into account not only some of the exceptional characteristics of the image - the transparency of the extremely fine fabric and the fact that the face could be seen present on both sides of the cloth -- but also served to permit the veil to be laid out and secured after having been damaged by the rough folding which even today is able to be seen in part by the naked eye.

Upon opening the internal frame Padre Antonio was thrown into a panic, according to what he writes in his report, as the image vanished and there remained only the silken fabric. In his confusion he tried to look a number of times at the veil which he held in his hands and not understanding what had happened he then decided to put everything back the way it was before. The image then reappeared, to the great relief of the father guardian who added that probably the Lord wanted to put him to the test, demonstrating for him "the divine nature" of the Veil, which he had previously thought "might have been a print". It is also interesting the evaluation regarding the type of fabric - silk - which the religious perceived while holding the Veil and turning it in his hands, which reveals on the tactile plane, beyond that of the visible plane, the texture of the threads.

Padre Antonio realized the urgency of documenting the episode for times to come -- drawing up the "relatione" (report), which is described on the front cover of the document as "Relatione del Volto Santo - del miracolo fatto dal Volto S. in tempo della guardiana del P. Antonio da Poschiavo", (The Report on the Holy Face -- on the miracle performed by the Holy Face during the time of the guardianship of Padre Antonio from Poschiavo), in which the names appear of some of the persons who had reason to be present, among whom was Nicola Valignani, belonging to the noble Teatine family. Certainly there was also present the goldsmith De Laurentiis of Chieti, who was dedicated to the production of the new frame.

Padre Filippo from Tussio in his history of the Holy Face (1875) reports at length on the episode and also reports briefly on an event quite similar which happened in 1703, whose protagonist was Padre Bonifacio from Ascoli, of whom there is lacking at this time any trace among the documents of the archives of the Convent.

It is a fact that since 1714 the Capuchins have not opened the internal frame of the reliquary; there is no reason to do so today for the irreparable damage that the extremely fine fabric might suffer. After three centuries of adhering to the panes of glass, the fabric may have become one with the glass. At the same time, the presence of the panes of glass does not impose any barrier to scientific research through recourse to modern technologies, which it should be noted have been in recent years applied including the use of digital microscopes, laser machines, infrared photography, etc.

There is little known about the life of Padre Antonio, the Capuchin who came down to Abruzzo from the valley of Grigioni in Switzerland, leaving the splendid alpine scenery of the Bernina for the spirituality of the Majella. We know that his family name originally was Costa, and that after Manoppello he was the the father guardian of the Convent in Chieti, the city where he died on July 16, 1742 at the age of 71, after 48 years in religious life. In the necrology of the Order of Friars Minor of Abruzzo, published in 1948, the Capuchin, whose swiss origin is there confirmed, is remembered as having been "charitable and prudent".

Thanks to some research which was done in the parish registers by the present day Pastor of the parish of Poschiavo, Don Cleto Lanfranchi, we learn that the family name Costa is common in the area and that the parish registers show that among the children baptized in 1671 there were four males with the last name Costa: Jacobus, Laurentius, Franciscus and Antonius. Unfortunately we don't know the baptismal name that Padre Antonio left behind after having taken his religious vows. For, ever since the earthquake of April 6, 2009 it has become extremely difficult to access the archives of the Province of the Capuchins following the transfer of their records from L'Aquila to Giulianova.

In the long line of humble capuchin friars who have accompanied the extraordinary history of the Holy Face of Manoppello, Padre Antonio, the friar come from afar, should be remembered for his witness of profound human emotion -- which one finds in his "Relatione" -- and which we believe ought to be transcribed in its entirety in order to facilitate its reading -- in coming face to face with an event which still today should give us pause to reflect.

I, Fra Antonio from Poschiavo, being guardian of this place of Manoppello in the year 1714, with the permission of my superiors and of his Excellency Monsignor Archbishop of Chieti, a collection for the Sacred Reliquary of the Holy Face was taken up among the faithful who donated some rings of gold and silver because of the many and varied graces which they had received.

Through the efforts of the goldsmith Signore De Laurentiis from Chieti, they were turned into a silver frame which the goldsmith had arranged come from Naples, a frame which presently adorns the Sacred Reliquary of the Holy Face.

While the frame was being worked on, the Signore Camerlengo with some others of the governing council of Manoppello, said to me that the council would like to donate 60 ducats and as much as needed for the completion of the frame, also the members of the Preti family indicated that they would also each like to give a donation; while I was considering whether to accept these offerings, Signore Nicola Valignani also said that it would be for the greater propriety of the Holy Reliquary for the council also to provide and keep a special key for the door of the tabernacle where the Holy Face is kept. Having understood this, I refused all of their offerings, and thanked them for their good spirit and devotion.

The frame in question was made with the simple donations taken from the rings of gold and silver, with the addition of twenty ducats from the offerings of the convent and thus was spent the sum of sixty three ducats for the frame and for the working in silver by the honorable goldsmith.

After I had removed the Holy Face from the wooden frame where it previously had been between its two crystal glass panes, in order to put it in the silver frame, the figure disappeared, and there only remained the simple silken veil and after looking and looking again many times I was not ever able to see the figure, then I remained confused and beside myself, not knowing whatever I might do nor with whom I could consult.

But God then made me realize that this Sacred Image was not a human work but that it was truly divine, and to more strongly confirm me in the devotion to this Image as previously I had supposed that it might have been a print.

As soon as I put the said panes of crystal glass back together upon it(the Image)appeared as beautiful as it can be seen at the present time.

May all this be for His greater glory, and to confound me first of all I have set this down in the current year 1714.

Fra Antonio from Poschiavo
Guardian of the Capuchins

Posted by Raymond Frost at 3:14 PM