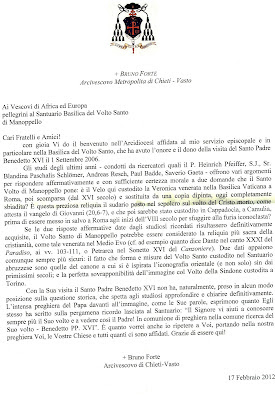 The concluding act of the Symposium of European and African Bishops held in Rome in February of this year was a pilgrimage to the Holy Face of Manoppello. Archbishop Bruno Forte of the Archdiocese of Chieti-Vasto, in whose diocese Manoppello is found, accompanied the Bishops to the Shrine and wrote the letter posted above, which he entrusted to each bishop. The following lines are my english translation of his important letter. Thanks to Antonio Bini for providing me with the copy of the Archbishop's letter and to Paul Badde for the photos of the blessed day 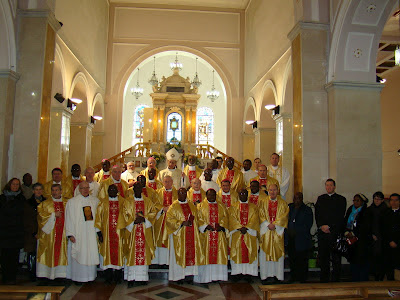 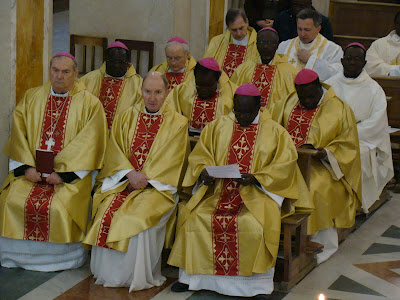 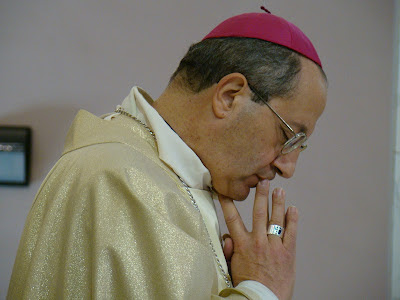 I welcome you with joy to the Archdiocese entrusted to my Episcopal service and in particular to the Basilica of the Holy Face which had the honor and the gift of the visit of the Holy Father Benedict XVI on September 1, 2006.

The studies of recent years -- conducted by researchers such as Fr. Heinrich Pfeiffer, S.J., Sr. Blandina Paschalis Schlomer, Andreas Resch, Paul Badde, Saverio Gaeta -- offer various arguments to respond affirmatively and with sufficient moral certainty to two questions which are raised by the Holy Face of Manoppello: Is the Veil cared for in this place the Veronica which was venerated in the Vatican Basilica in Rome, which then went missing (from the 16th century)and was substituted by a painted copy which today is completely faded? Is this the precious relic -- the sudarium-- placed on the face of the dead Christ in the tomb which was attested to in the Gospel of John (20:6-7), and then was present in Cappadocia, in Camulia, prior to being sent to safety in Rome at the beginning of the eighth century to elude the iconoclasts? 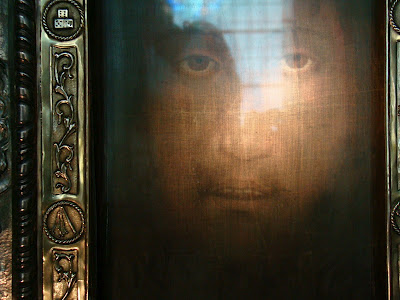 If these two affirmative replies given by the scholars should be found to be definitively established, the Holy Face of Manoppello would have to be considered the most holy relic of Christianity, such as it was venerated in the Middle Ages (cf. for example what Dante says in Canto XXXI of Il Paradiso, or Petrarch in Sonnet XVI of Il Canzoniere). Two elements appear ever more secure: the fact that the features and shape of the Holy Face kept in the Shrine in Abruzzo are those of the canon which inspired the Eastern (and other) iconography from the very first centuries; and the perfect match which results when the image is placed over the Face of the Shroud kept in Turin.

With his visit the Holy Father Pope Benedict XVI naturally has not taken in any way a position on the historical question, which is up to scholars to deepen and definitively clarify. The intense prayer of the Pope before the image, as well as his words, express what he himself has written on the memorial parchment he left at the Shrine: "May the Lord help you to know ever more His face and thus to see the Father! In communion of prayer in the common research of His Face -- Pope Benedict XVI". It is what I too wish to repeat to you, keeping in my prayer all of you, your churches and those who are entrusted to your care. Thanks for being here!