The Veronica Illustrated and Described by Alberto Da Castello in 1521 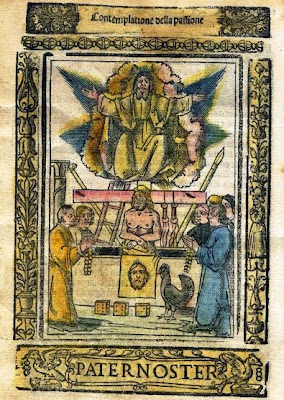 A significant image of the Veronica dating from the time during which it was enshrined in Rome is contained in the "Rosary of the glorious Virgin Mary," (Rosario della gloriosissima Vergine Maria) a sort of visual aid to prayer accompanied by fine woodcuts depicting scenes from the life of Jesus and Mary. The work was edited by Alberto Castellani (or Castellano), Venetian Dominican, and was printed for the first time in Venice in 1521 by Marco Sessa and Piero da la Serena. In a later edition from 1523 the accompanying illustrations are reproduced in color. The image shown above, measuring 10.4 cm. x 15.1 cm, was included in this edition which dates from just before the Sack of Rome in 1527.

The face corresponds to the features of the Veronica in the Opusculum of Jacopo Grimaldi, and to those in the reproductions contained in the "The Marvels of the City of Rome" (Mirabilia Urbis Romae). We are in the early decades of the printing press in Italy and, even with the simplicity of the lines, it is obvious that the eyes are open and that the face cloth can not be confused with other images, and in particular with that of the burial cloth of the Shroud.

The Dominican friar, author of other publications, certainly spent some time in Rome, prior to his book on the Rosary, publishing the "Pontifical Book of the Roman Church" (Liber pontificalis della Chiesa romana) (1520), dedicated to Pope Leo X, thus having the opportunity to personally observe the Veronica and venerate it together "with all the people".

As is deduced from the description "of the Sudarium of Veronica" which appears on the back of the image, excerpts of which are here provided from the text:
"The sudarium of Veronica ... venerably preserved in the church of St. Peter, is shown on certain days of the year with the greatest reverence and devotion of all the people in praise of the Lord God: which He wanted to leave to His faithful Christians as a memory of his most holy passion on earth: the figure being of such fineness that upon being shown clearly to all the people it moves them to weeping and devotion." 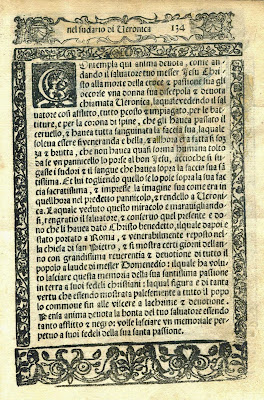 Today it is widely documented that, following the disappearance of the Veronica, crudely modified copies were spread, usually with eyes closed, and even declared authentic to the original which no longer was to be found in Rome. One of these authentic copies is also displayed at the Shrine of the Holy Face of Manoppello.

The description of such reverence for the Veronica, in line with that of many other authoritative sources (Dante, Stefaneschi, etc..), permits us to reflect on how over the centuries there has been dying out the veneration of pilgrims who once came en masse to the Eternal City to pray before the extraordinary image, even before Boniface VIII proclaimed the first Jubilee in 1300.
Posted by Raymond Frost at 7:29 AM

Thank you for this page. I love it. I love Jesus, Mary and Joseph.