The Breastplate of St. Patrick 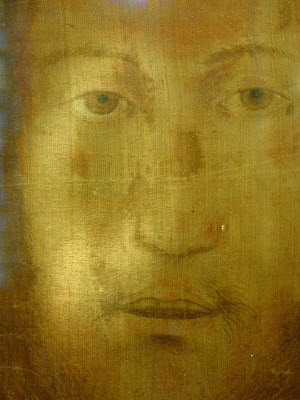 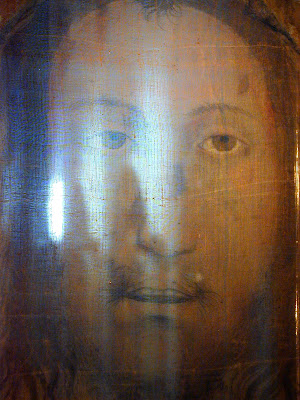 St. Patrick, Apostle of Ireland, is truly a Lenten saint. Two of the most important locations associated with him in Ireland are places of penitential pilgrimage: Croagh Patrick and St. Patrick's Purgatory. His feast day, March 17, falls squarely in the middle of Lent. However he is also a saint of the Annunciation of the Blessed Virgin Mary as the novena in her honor begins on his feast day. He is also an Easter saint because it was on Easter that the great victory for Christ over the forces of Irish paganism was won by his courageous intervention. Read the following account from the Catholic Encyclopedia which ends in the text of the inspired prayer known as "The Breastplate of St. Patrick" As we meditate on the Holy Face it is a truly appropriate prayer. (confer http://www.newadvent.org/cathen/11554a.htm)

"St. Patrick arrived at the hill of Slane, at the opposite extremity of the valley from Tara, on Easter Eve, in that year the feast of the Annunciation, and on the summit of the hill kindled the Paschal fire. The druids at once raised their voice. "O King", (they said) "live for ever; this fire, which has been lighted in defiance of the royal edict, will blaze for ever in this land unless it be this very night extinguished." By order of the king and the agency of the druids, repeated attempts were made to extinguish the blessed fire and to punish with death the intruder who had disobeyed the royal command. But the fire was not extinguished and Patrick shielded by the Divine power came unscathed from their snares and assaults. On Easter Day the missionary band having at their head the youth Benignus bearing aloft a copy of the Gospels, and followed by St. Patrick who with mitre and crozier was arrayed in full episcopal attire, proceeded in processional order to Tara. The druids and magicians put forth all their strength and employed all their incantations to maintain their sway over the Irish race, but the prayer and faith of Patrick achieved a glorious triumph. The druids by their incantations overspread the hill and surrounding plain with a cloud of worse than Egyptian darkness. Patrick defied them to remove that cloud, and when all their efforts were made in vain, at his prayer the sun sent forth its rays and the brightest sunshine lit up the scene. Again by demoniac power the Arch-Druid Lochru, like Simon Magus of old, was lifted up high in the air, but when Patrick knelt in prayer the druid from his flight was dashed to pieces upon a rock.

Thus was the final blow given to paganism in the presence of all the assembled chieftains. It was, indeed, a momentous day for the Irish race. Twice Patrick pleaded for the Faith before Leoghaire. The king had given orders that no sign of respect was to be extended to the strangers, but at the first meeting the youthful Erc, a royal page, arose to show him reverence; and at the second, when all the chieftains were assembled, the chief-bard Dubhtach showed the same honour to the saint. Both these heroic men became fervent disciples of the Faith and bright ornaments of the Irish Church. It was on this second solemn occasion that St. Patrick is said to have plucked a shamrock from the sward, to explain by its triple leaf and single stem, in some rough way, to the assembled chieftains, the great doctrine of the Blessed Trinity. On that bright Easter Day, the triumph of religion at Tara was complete. The Ard-Righ granted permission to Patrick to preach the Faith throughout the length and breadth of Erin, and the druidical prophecy like the words of Balaam of old would be fulfilled: the sacred fire now kindled by the saint would never be extinguished.

The beautiful prayer of St. Patrick, popularly known as "St. Patrick's Breast-Plate", is supposed to have been composed by him in preparation for this victory over Paganism. The following is a literal translation from the old Irish text:

I bind to myself today
The strong virtue of the Invocation of the Trinity:
I believe the Trinity in the Unity
The Creator of the Universe.

I bind to myself today
The virtue of the love of seraphim,
In the obedience of angels,
In the hope of resurrection unto reward,
In prayers of Patriarchs,
In predictions of Prophets,
In preaching of Apostles,
In faith of Confessors,
In purity of holy Virgins,
In deeds of righteous men.

I bind to myself today
The power of Heaven,
The light of the sun,
The brightness of the moon,
The splendour of fire,
The flashing of lightning,
The swiftness of wind,
The depth of sea,
The stability of earth,
The compactness of rocks.

Christ, protect me today
Against every poison, against burning,
Against drowning, against death-wound,
That I may receive abundant reward.