Come, Let us Walk in the Light of the Lord 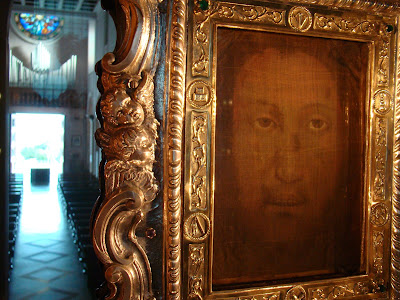 "The face of Christ is the face of light that tears open the obscure mystery of death: it is the proclamation and pledge of our glory, because it is the face of the Crucified and Risen One. On it, the Church, his Bride, contemplates her treasure and her joy"

"Christianity is born and continually draws new life from this contemplation of the glory of God shining on the face of Christ".

"In the human face of the Son of Mary we recognize the Word made flesh in the fullness of his divinity and humanity. The greatest artists of East and West have striven to capture the mystery of that Face. But it is the Spirit, the divine Iconographer, who etches that Face in the hearts of all who contemplate him and love him."


"The basic task of every Christian is to be, first and foremost, one who contemplates the Face of Christ"


"To contemplate the face of Christ, and to contemplate it with Mary, is the 'programme' which I have set before the Church at the dawn of the third millennium, summoning her to put out into the deep on the sea of history with the enthusiasm of the new evangelization. To contemplate Christ involves being able to recognize him wherever he manifests himself, in his many forms of presence, but above all in the living sacrament of his Body and Blood. The Church draws her life from Christ in the eucharist; by him she is fed and by him she is enlightened. The Eucharist is both a mystery of faith and a 'mystery of light'. Whenever the Church celebrates the Eucharist, the faithful can in some way relive the experience of the two disciples on the road to Emmaus: ' their eyes were opened and they recognized him'"