The Holy Face of Manoppello In History and in the Future 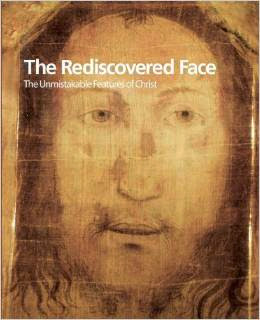 In August of last year there was an important exhibition on the Holy Face during the annual Meeting of Rimini. Thousands of attendees were able to see the story of the Holy Face in history. In January of this year in New York a similar exhibition was held during the annual New York Encounter. A catalog describing the history of the Holy Face was produced in Italian with an english translation. The catalog entitled "The Rediscovered Face: the Unmistakable Features of Christ" is a tremendous resource for scholars as well as ordinary folks who would like to deepen their knowledge of the Holy Face. It contains many articles and examples of images of Jesus throughout the centuries, and in addition has a large number of important footnotes, and an extensive bibliography. The foreward was written by Cardinal Sean O'Malley of Boston.

The catalogs were produced by the same team as the exhibits, headed by the artist Rafaella Zardoni, along with Emmanuele Colombo, Michele Colombo, Paolo Martinelli, O.F.M. Cap, Paola Francesca Moretti, Giovanna Parravicini, and Maria Cristina Terzaghi. They were assisted by Paul Badde, Gregory M. Pell, Arianna Petraccia, Heinrich Pfeiffer, S.J., Davide Rondoni, Marco Rossi, Silvana Tassetto, and Paola Vismara. Amanda Murphy, Chris Vath and myself were responsible for the English translation. The english translation is available from www.Amazon.com as a paper back book and from www.ibs.it as an e-book.

In February of this year an association was formed coming out of these exhibtions to promote the study and knowledge of the image of the Face of Christ present in Manoppello and the history of the ancient acheropite images of Christ: representations of Christ on cloth which in accordance with various traditions in the East and the West were left by Christ Himself as a memorial of His Face. The website for this association is www.ilvoltoritrovato.org

I can't wait to read this! Thank you for letting your readers about it.

I am almost through the Rediscovered Face. Thank you! Also, I have recommended www.ilvoltoritrovato.org to Catholic homeschoolers in our area. Praise be Jesus! Now and forever, Amen
Sincerely, Carol Surowiec