From Manoppello to Rome: January 16 to 17, 2016 Pilgrimage- Commemoration of the Procession of the Holy Face Instituted by Innocent III


Starting from Manoppello, home of the Shrine of the Holy Face, a large group of
religious pilgrims and volunteers accompanied by the choir of the local church, will set out on Saturday January 16, 2016 on a pilgrimage to Rome, in the year of the Extraordinary Jubilee.  These pilgrims will be retracing a path following the ancient procession of the Veronica which was instituted by Pope Innocent III in 1208, carrying in procession a copy of the Holy Face which many scholars identify with the Veronica (vera icona "true icon").

Beginning at the end of the colonnade of St. Peter’s Square at 4pm the pilgrims will move towards the Church of Santo Spirito in Sassia.  Exposition and Veneration.  At 6:30pm Holy Mass will be celebrated there by Archbishop Georg Gänswein with music led by the choir of the Basilica of the Holy Face..

The image, enclosed in the reliquary which from 1902 to 1956 was used to hold the Holy Face in Manoppello,  will remain on display in the Santo Spirito church also on Sunday Jan. 17, until 8pm.  At 6:30pm a solemn closing Mass will be celebrated on the 17th with music led by the parish choir of the Church of Saint Ignatius of Antioch in Rome.

The idea for the pilgrimage came about during the National Conference of the Rectors of Italian Shrines which took place in Rome from November 22 to 27, 2015 and which had as its theme "Jubilee of a history: a welcome, nearby, prophetic memory”

In fact it was the grandeur of  history which was the basis for the plans to organize the pilgrimage, discussed by Msgr. Josef Bart, rector of the Shrine of the Santo Spirito in Sassia, and Fr. Carmine Cucinelli, Rector of the Shrine the Holy Face of Manoppello, in the presence of the author Paul Badde.


The origins of the cult of Veronica: the procession to Santo Spirito di Sassia

(photo shows Innocent III holding the Veronica in his right hand and the rule of Santo Spirito in his left - particular from the Liber regulae S. Spiritus)

"Over the centuries Rome was enriched with notable relics. One in particular
acquired an exceptional prestige: the sudarium of Christ known and revered by the name of
"Veronica". So wrote just prior to the Jubilee of 2000 the influential French medievalist Jacques Le Goff.  The image, which came to Rome in unknown circumstances, is mentioned for the first time under Pope John VII (705-707).

A significant turning point in the cult of Veronica came in 1208 when Pope Innocent III  established a special procession - on the Sunday following the Octave of Epiphany – which started at St. Peter’s and arrived at the nearby Church of the Holy Spirit (Santo Spirito in Sassia) and its adjoining hospital.

The image of the Holy Face was accompanied by a solemn procession "With hymns and canticles, psalms and lit candles, "wrote an anonymous contemporary biographer (Gesta Innocentii III).

Crowds of pilgrims took part in the procession which was an extraordinary opportunity for faith for recuperating patients and perhaps an opportunity to solicit funds for the support of the
hospital operation which, according to the wishes of Innocent III, was then rebuilt and
expanded, on the crumbling foundations of the "Schola Saxonum ", the original structure which was founded in the year 727 by Ina, Queen of the Saxons, as a hotel, hospice, hospital, seminary and cemetery. Sassia (or Saxia) still today recalls those distant origins.

It was precisely in the course of this important work of reconstruction that the Church was
built - wedged into the middle of the hospital structure - assuming the name of the ancient hospital considered the oldest in Europe. 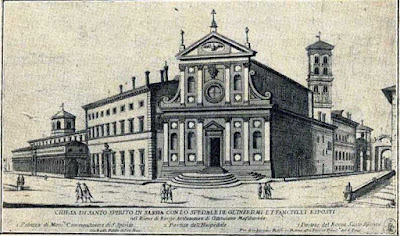 These circumstances constituted one of the historical precedents that led Pope Boniface
VIII to proclaim the first Jubilee in 1300. For centuries the hospital, in addition to aiding the sick, took steps to assist the poor and for the care of abandoned children, becoming a true bastion of charity.

At the end of the sixteenth century Saint Camillus de Lellis undertook there for nearly three decades his tireless work of assistance to the sick.  Even before that Saint Philip Neri distinguished himself there as well.  Innocent III gave the first rule of the hospital organization which he placed under the direct supervision of the papacy.

The precious manuscript "Liber Regulae Sancti Spiritus in Saxia ", published around
1350 is preserved in the State Archives in Rome.  Accompanying the text containing the rules of the hospital is a rich iconography that provides an interesting pictorial description of what was then the religious life and practical assistance to the sick and needy.

At the bottom of the first page of the Liber is one of the oldest illustrations of the Veronica, which shows Pope Innocent III with the Veronica in his right hand and the Rule granted to the brothers in the hospital in his left.


The historical and documentary value of the manuscript, which for centuries was ignored
or neglected, resurfaced on the eve of the Great Jubilee of 2000, which, with the strong encouragement of John Paul II, gave an extraordinary thrust to recovering two thousand years of history, starting again from the centrality of the historical figure of Christ.  The Liber was in fact displayed in the important exhibition "Rome & Jubilees: the medieval pilgrimage to Saint Peter’s ", held at the Palazzo Venezia, Rome, from October 29, 1999 to February 26, 2000. The document was shown again during the exhibition "The Face of Christ" - the final exhibition of the Jubilee - staged at the Palazzo delle Esposizioni in Rome, from December 9, 2000 to April 16 2001. In both exhibitions, which saw the direct involvement of the Vatican Library, the issues related to the historical reconstruction of Veronica or the Holy Face was revived after centuries of silence, with a series of extraordinary documents and exhibits, in many cases shown to the public for the first time, as it is claimed in the respective catalogs, which for the importance of new contents and authority of the scholars involved, represent publications of extraordinary historical value.


The historian Gerhard Wolf, who collaborated on both exhibitions, in the catalog for the first show described Innocent III as being "the founder of the cult of Veronica ", emphasizing, also just how “precious" the miniature contained in the Regulae is in order to understand "the cult and the external appearance of the Veronica." A few months later the German historian continued the same theme in the catalog of the final exhibition of the Jubilee, raising the question as to whether or not the famed image might be present in Abruzzo. A question that probably arose in the mind of many visitors to the exhibition, who, like me, meditated in front of the precious empty reliquary, from the "Treasury of St. Peter’s", which -donated by three Venetian nobles in Jubilee of 1350 - once held between the two panes the Veronica, a sign of the visibility of the image from both sides. In any case, the rediscovery of the ancient miniature allows us to exclude definitively that the Veronica can be identified with the Shroud, as some scholars claimed a few years ago.

Returning to Pope Innocent III, it must be remembered that he manifested his deep true devotion to the image also by writing a special prayer:

"O God, who has marked us with the light of Thy Face as your memorial, and at the request of
Veronica, left us Thy Image imprinted on the sudarium; grant we pray, that by your passion
and death, to adore, venerate and honor you, in mystery and as through a mirror on earth, so that we might be able to certainly see you, face to face, when you come as our judge”

In the wake of Innocent, about a century later, Pope John XXII composed the famous hymn "Salve sancta facies” that pilgrims sang during the expositions of the Veronica
and during the Jubilee of 1350.  During the sack of Rome (1527) the destructive fury did not spare the Church of Santo Spirito nor even the sick who were recuperating in the adjacent hospital who were all put to death. In those dramatic days experienced by the Eternal City the Veronica also disappeared. In an interview in 2001, the Austrian Redemptorist Andreas Resch, an expert on paranormal phenomena, supported the hypothesis that the extraordinary image would have been brought for safekeeping to Abruzzo and specifically to Manoppello.

Also after Innocent III later popes always followed closely the conditions at Santo Spirito   Among those who distinguished themselves were especially Eugene IV (1431-1447), who didn’t hesitate to take on the direct leadership of the hospital, and Sixtus IV (1471-1484) as well. Both popes undertook significant works of reconstruction and expansion. In his rather brief pontificate, Celestine V (1294) also distinguished himself.  He exempted the friars of the Santo Spirto from having to pay the customary church levy and greatly increased indulgences. It’s quite probable that he was implicitly thinking of Santo Spirito when he founded the order of the Brothers of the Holy Spirit (later Celestini),in the hermitage of the same name on the Maiella. The centuries-old ties of the glorious hospital with the popes was interrupted in 1870, with the fall of the temporal power of the papacy. The hospital and the church became part of the then Kingdom of Italy.

The pilgrimage on January 16 and 17, 2016 also intends to remember Innocent III eight hundred years after his death. Considered great for his reconstruction, expansion and support of the hospital of Santo Spirito, the pope is also noted for his approval of the Franciscan and the Dominican orders and for his vast work concentrating on the spiritual renewal of the church of his time.


The church of Santo Spirito during the papacy of John Paul II became the Shrine and spiritual center of the Divine Mercy, tied to Sister Faustina Kowalska, canonised in 2000. In the Shrine are present some relics of St. Faustina and St. John Paul II also.

A recent bond between Santo Spirito in Sassia and the Shrine of the Holy Face is to be found in the person of Cardinal Fiorenzo Angelini, who for nearly a quarter century, until his death on November 22, 2014, was cardinal deacon of Santo Spirito. The Cardinal, who in 1997 founded the International Institute for Research on the Face of Christ, was among the first to authoritatively support the thesis of Professor Heinrich Pfeiffer regarding the identification of the mysterious image of Manoppello.


Particularly linked to the Shrine of Abruzzo, where he often went on pilgrimage, the Cardinal entrusted to the Holy Face "the present and the future of the beloved Congregation of
Benedictine Sisters of Reparation of the Holy Face ", for whom he became their spiritual mentor following the death of  their founder Venerable Ildebrando Gregori.
Posted by Raymond Frost at 2:56 PM