The image of Christ has come back into history

Considerations on the exhibit "The Rediscovered Face: The unmistakable features of Christ" 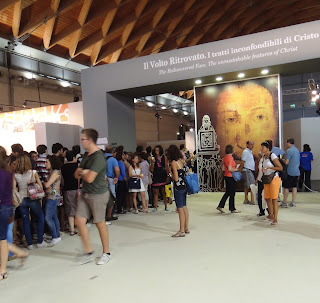 "The image of Christ has come back into history.", author Paul Badde (The Holy Face, Ignatius Press 2010 and The True Icon, Ignatius Press 2012) emphatically said while meeting visitors to the exhibit "The Rediscovered Face: The unmistakable features of Christ". The exhibit, held as part of the 2013 Meeting of Rimini, retraces the vast iconographic research on the Veronica that formerly was believed to have been lost yet in recent years has been identified as being the Holy Face preserved at Manoppello. The exhibit of Rimini is an event that is rooted in the Year of Faith. 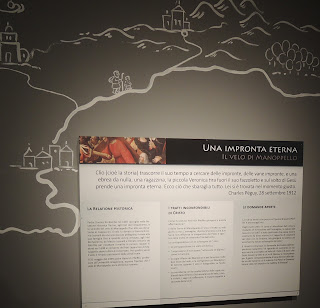 the journey toward Manoppello

The exhibit was visited by 3-4 thousand visitors a day, who waited in line at the entrance to enter on a journey along two thousand years, summarized and organized in various historical phases, with guides who accompanied to explain the fascinating history of the face of Christ through the centuries. The young guides from various parts of Italy deserve sincere appreciation, because with passion and clarity they shared with the numerous visitors the message of the exhibit and of the Holy Face itself, which all the guides had come to know by visiting Manoppello. 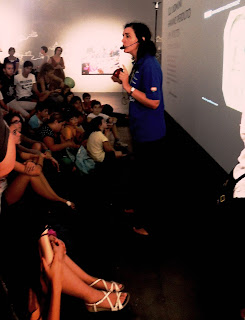 People entered in groups of around 30 to 40 at a time. At the end of the exhibit there was a section dedicated to the Holy Face of Manoppello, which Fr. Heinrich Pfeiffer in 1999 had affirmed to be the Veronica. From that time the Holy Face has been at the center of further studies and research, which led to the visit by Benedict XVI to Manoppello on September 1, 2006. One screen showed a sequence of images of the Holy Face including some of which were superimposed over the face of the Shroud of Turin. Then there appeared theme music from the Italian national television network RAI TG1's nightly news program of May 31, 1999. On the screen is seen one of the headlines for that evening's program: "After hundreds of years the Veronica has been found in Abruzzo", followed by a report by a Vatican expert Fabio Zavattaro which included an interview with Father Pfeiffer in the course of a news conference held at the Italian foreign press association. Each visit to the exhibit ended with young people applauding and deep in thought while leaving the area to the next group which immediately followed. 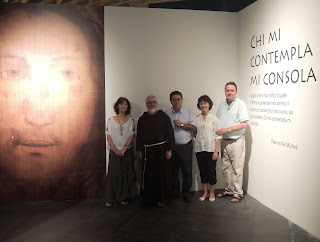 The German writer began his talk by asking the audience what they think will be remembered in the future regarding the history of Benedict XVI. Someone says, "his resignation." Badde responded that the 2006 visit to Manoppello, along with his resignation following the example of Celestine V, will probably be the only historical moments of the pontificate of Benedict XVI destined to be remembered in the future. "With this visit to Manoppello a pope returned after almost five centuries to kneel in front of the Veronica", said Badde, who pointed out that after his visit to Manoppello the pope frequently inserted in his talks a reference to the "human face of Christ."

"When he came to Manoppello," said Badde, "he already knew all about that face. The then Cardinal Ratzinger, before he became pope, was my neighbor. I had kept him informed regarding all my research on the Holy Face and he was the first to whom I gave a copy of my book on the Holy Face as soon as it was published in Germany in 2004. It was inevitable for him to become a pilgrim in Manoppello." 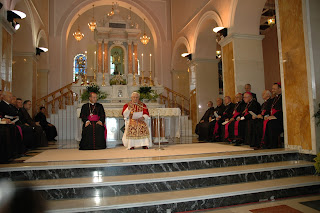 The meeting with the young people, was opened by Raffaella Zardoni, the main organizer of the exhibition, who explained how after having come to know the Holy Face she felt the need to search for images of Veronica, especially those from prior to the sixteenth century, by means of the project "Veronica-Route". She encouraged everyone to report on the web from anywhere in the world such frescoes, paintings and illustrations on this theme which are found in churches, museums and collections, in order to ascertain the progressive importance and extraordinary diffusion of the Veronica in the history of Christianity.

"Presently," she admits, "I find it difficult to update the site with over a thousand images that are waiting to be put on the website http://raffackfav.wordpress.com." But the quest is sure to continue. 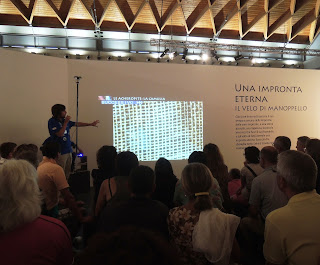 Then it was the turn of Father Carmine Cucinelli, Rector of the Shrine of the Holy Face, who told with great simplicity of his personal relationship with this amazing image. In thanking the organizers, he recalled how the title of the exhibit is not all that different from that of the story told in comic book form "The Veronica Rediscovered", of which he is editor of the text. He expressed his wish that the exhibit held at the Meeting might be repeated in other cities in Italy and abroad. It appears that some such requests have already been made.

Badde in answering some questions about the importance of this image, stated that it "is not a myth, an abstraction, but a real face" which, in his opinion, constitutes "the greatest treasure for humanity and for Christians in particular." In this respect, he continued, "it is not easy to understand the attitude of hostility towards the Holy Face coming from a number of sindonologists (experts on the Shroud) and, unfortunately, also from some members of religious societies."

Finally there was a request for a further explanation regarding the thesis put forth by Fr. Pfeiffer at the international press conference held in Rome on May 31, 1999 --that the Veronica and the Holy Face are one and the same.

I (Antonio Bini) was invited to answer having been the organizer of that press conference where the hypthoses on the Holy Face were communicated to the world, along with research on the inexplicable nature of the veil based on the images analyzed by Professor Donato Vittore of the University of Bari.

I pointed out that that the conclusion of the German professor Fr. Pfeiffer was based on his years of research which were devoted to the search for the prototype which inspired the depiction of Christ through the centuries. That face he discovered in the Face of Manoppello, which at that time was known only locally. It is the "rediscovered face", in fact, that does not belong to any school of art. 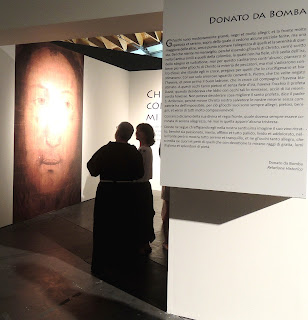 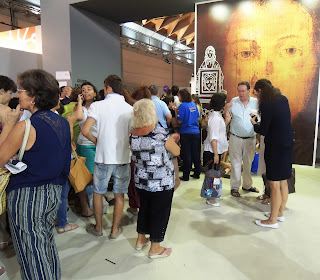 People waiting to enter the exhibit being greeted by Paul Badde
Posted by Raymond Frost at 8:07 PM

Thank you for posting this article Raymond! I wish I could have been there. I saw Il Volto Santo in October of 2012. No photo can quite capture what I saw there. It is truly "a living image" which left a lasting impression of God's infinite Mercy and unsurpassing PEACE in my heart... I pray more and more souls will share the same in gazing on His Holy Face!