A View of the Veronica along with an Angelic Hand 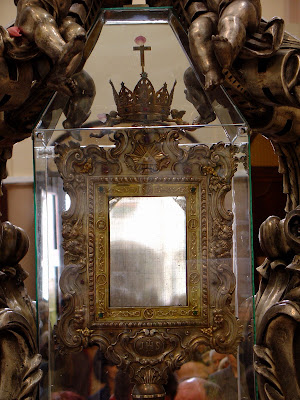 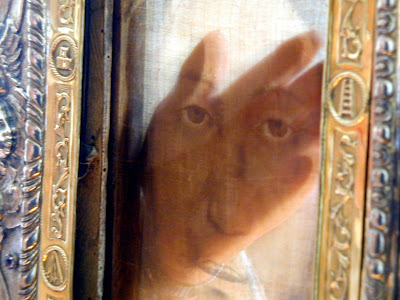 Each year in Manoppello on the third Sunday of May there takes place a procession from the Capuchin Shrine of the Holy Face, about a kilometer outside the walls of the old commune of Manoppello, to the church of San Nicola, where tradition holds that in 1506 an angelic personage handed over the Holy Face to a citizen of Manoppello. It was in 1506 that Pope Julius II laid the cornerstone for the Veronica pillar which is also the cornerstone of the whole edifice of the present St. Peter's Basilica. Coincidentally it was also in 1506 that the same pontiff gave permission for the establishment of a feast of the Holy Shroud of Turin on May 4 each year, with its own proper Mass and Office.

Here is a photo of the Veronica now present in Manoppello as it arrives at the Church of San Nicola with a small tribute of a single rose petal perched near the cross above the Veronica. During the festive procession,and especially once the Veronica arrives inside the commune's walls, the people of the commune toss an abundance of rose petals to honor the Holy Face of Jesus.

Next year in 2010 this procession will take place on May 16 toward the end of the announced Exposition of the Holy Shroud in Turin which will be from April 10 to May 23. However it is not necessary to wait until that time to see the Holy Face. One may go there at any time the Shrine of the Holy Face is open, which is every day. And hopefully you will have the good fortune to meet a modern day angelic personage, Sr. Blandina,who will explain for you the most blessed Face which is the true image of the Lord. It is through her hands, one of which is actually seen helping to make visible the Face of Jesus in the second photo above, that the Holy Face has now passed from Manoppello to the world.
Posted by Raymond Frost at 11:41 AM 1 comment:

Sad But Also Necessary Views of the Actual Condition of the Veronica of St. Peter's Basilica 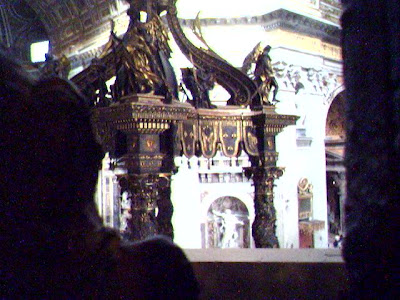 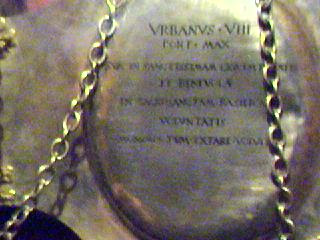 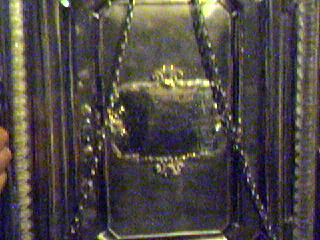 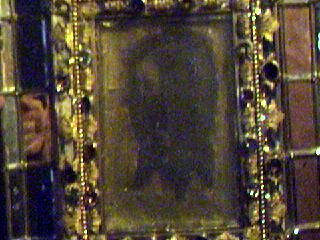 I have thought about whether to post these photos for a long time. First, they are not very good quality. Second they reveal something not very pretty. Yet in posting them I wish to make an appeal to authorities at St. Peter's, as well as to experts on the Shroud that they might put aside personal preferences and their own uninformed opinions to take a fresh look at the Holy Face of Manoppello and let the truth be known.

The photos do not reveal anything new. Already in 1907 Monsignor Wilpert after examining the Veronica in St. Peter's stated that no image at all could be seen on the cloth. More recently, in March 2005, the German journalist Paul Badde was allowed to see the Veronica in St. Peter's from up close, and as he describes the relic in his book soon to be published in english, "one cannot recognize there any signs of an image or painting, nothing at all". How long must this truth be ignored?
Posted by Raymond Frost at 10:02 PM No comments:

Homage to the Holy Spirit 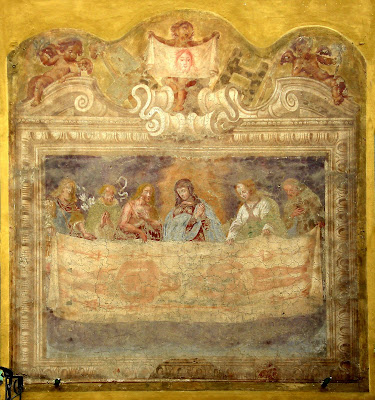 The above photo was taken by Georg Bickl of Germany. It shows a most amazing fresco from the city of Pinerolo in Piedmont not far from the city of Turin. The fresco, which is on the outside of a building at the intersection of Via Germano Sommeiller and Via Archibugeri di San Georgio close to the Church of the Sacred Heart depicts in a most singular way the connection between the Shroud of Turin and the Sudarium (Veronica-Holy Face of Manoppello). It is a fact of history that the first exposition of the Shroud of Turin in Italy took place exactly in Pinerolo in the year 1478. In those years the House of Savoy kept the Shroud in their capital of Chambery in France but they always took the Shroud with them wherever they traveled, The Duchess Jolanda, who had taken over as head of the House upon the death of her husband Blessed Amedeo, spent a good part of 1478, the last year of her life, in Pinerolo and wished that it be exposed there. It was not until the late 1500's, after the Savoy had established their capital in Turin, that the Shroud would remain in Turin. In the region of Piedmont there are over 100 paintings depicting the Shroud of Turin, although this particular painting may be the only one in Piedmont, or anywhere else for that matter, which links the Shroud with the Sudarium.

O Mary, Mother, Teacher and Queen of All Apostles, enlighten the hearts of all peoples to seek the face of your son Jesus Christ. You know him better than anyone could ever hope to know him. In your mind and spirit you longed to see him in your womb before he was born. You comforted and consoled him and nurtured him throughout his life, even to his more awful suffering and death. Be with us O Mary on our journey to be with Jesus, to live for Jesus, to live in Jesus. Amen.
Posted by Raymond Frost at 1:22 PM No comments:

Fervent Prayers For and With the Youth of Iran 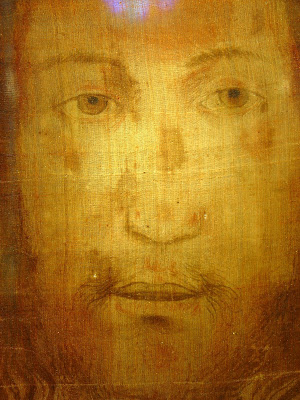 I say that we all have a duty to remember and pray for the innocent men and women of Iran who have been killed in horrific ways, who are being killed at this moment and for those, especially the women, who are being threatened with death solely because they are for justice, truth, goodness and beauty.

Why, O Lord, do you stand far off? Why do you hide yourself in times of trouble? In arrogance the wicked persecute the poor -- let them be caught in the schemes they have devised...

Their mouths are filled with cursing and deceit and oppression; under their tongues are mischief and iniquity. They sit in ambush in the villages; in hiding places they murder the innocent.

They stoop, they crouch, and the helpless fall by their might. They think in their heart, "God has forgotten, he has hidden his face, he will never see it."

Rise up, O Lord; O God, lift up your hand, do not forget the oppressed. Why do the wicked renounce God, and say in their hearts, "You will not call us to account"?

But you do see! Indeed you note trouble and grief, that you may take it into your hands; the helpless commit themselves to you; you have been the helper of the orphan.

Break the arm of the wicked and evildoers; seek out their wickedness until you find none. The Lord is king forever and ever; the nations shall perish from his land.

O Lord, you will hear the desire of the meek; you will strengthen their heart, you will incline your ear to do justice for the orphan and the oppressed, so that those from earth may strike terror no more."

Posted by Raymond Frost at 4:29 PM No comments: 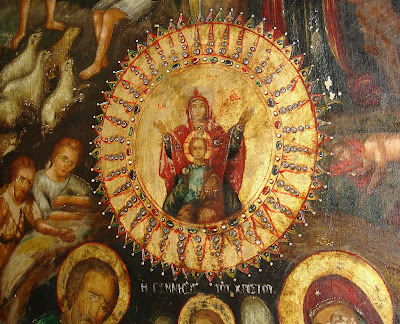 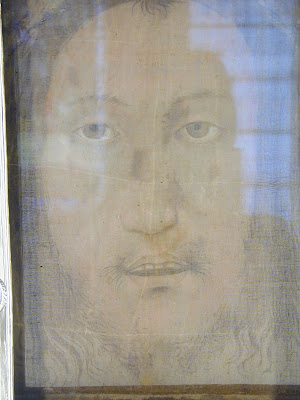 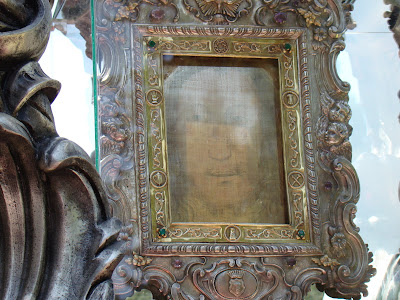 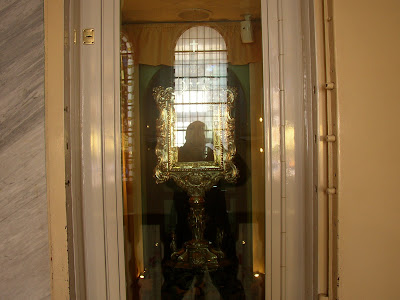 Psalm 33:13-22 "From Heaven the Lord looks down; he sees all mankind. From his fixed throne he beholds all who dwell on the earth, He who fashioned the heart of each, he who knows all their works. A king is not saved by a mighty army, nor is a warrior delivered by great strength. Useless is the horse for safety; great though its strength, it cannot provide escape. But see, the eyes of the Lord are upon those who fear him, upon those who hope for his kindness. To deliver them from death and preserve them in spite of famine. Our soul waits for the Lord, who is our help and our shield, for in him our hearts rejoice; in his holy name we trust. May your kindness, O Lord, be upon us who have put our hope in you."
Posted by Raymond Frost at 4:02 PM No comments:

Original Icon of the Holy Eucharist and the Holy Trinity 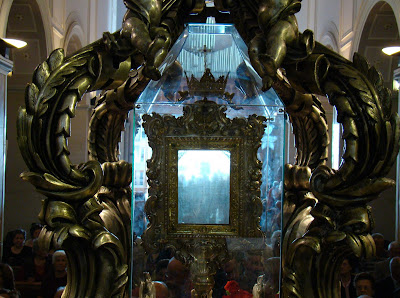 It seems that the Latin Church's tradition of the Exposition of the Most Blessed Sacrament, making use of a double sided monstrance with glass lunette, dates from no earlier than the arrival in Rome of the image of the Veronica (Holy Face of Manoppello). And according to Paul Badde it was because of the tremendous devotion given to the Veronica in Rome that the traditional Procession on the feast of Corpus Christi was initiated and spread throughout the Latin (Western) Catholic Church.

It also seems that this Holy Face of Manoppello is a reflection of the mystery of the Holy Trinity, Jesus united with His Father and the Holy Spirit in a spiralling of processions.
Posted by Raymond Frost at 12:41 PM No comments: