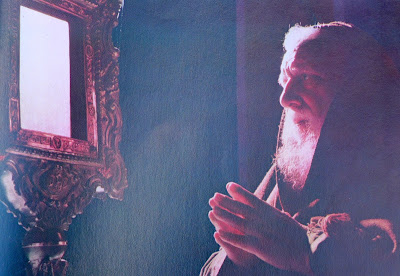 Recently I received the good news from Antonio Bini of the decision of the Vatican's  Congregation for the Cause of the Saints to grant the Nihil Obstat for the Cause of Beatification of the Servant of God Padre Domenico da Cese, O.F.M., Cap. (1905-1978) the Apostle of the Holy Face of Manoppello.  Padre Domenico resided at the Shrine in Manoppello from 1965 to 1978.  He promoted the Holy Face in every way possible and lived an exemplary life as a religious.


Here is a copy of the Nihil Obstat from the Congregation addressed to the Archbishop of Chieti-Vasto Bruno Forte. Thanks to Antonio Bini for this news and the copy of the Nihil Obstat.  The faithful devoted to Padre Domenico who have witnessed extraordinary events that would be useful to the process of beatification are asked to send the pertinent information to the Santuario del Volto Santo 65024 Manoppello - Italy 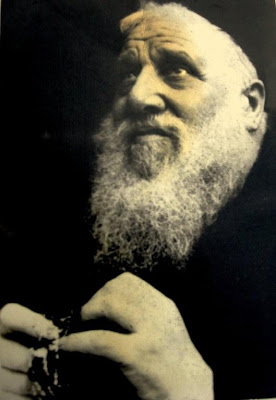 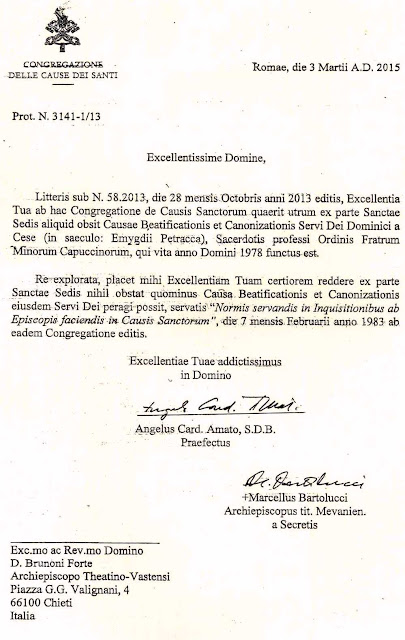 Know that I am With You Always, Until the End of the World! the Gospel of Matthew 28:20

"Rejoice in the Lord always! Again I Say Rejoice!"
( from the Letter of the Apostle Paul to the Philippians 4:4)

Posted by Raymond Frost at 2:09 PM No comments:

Plans for New Mission to the Philippines, Canada and the USA 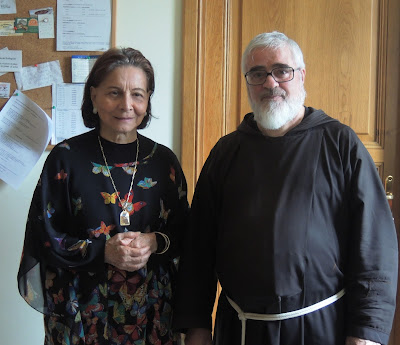 Following the success of the first mission launched in September 2014 , which was announced by a press release on the website of the Episcopal Conference of the Philippines:

a new mission of the Shrine of the Holy Face is being organized for the Philippines.

The program for the mission, which is currently being finalized, also includes several stops prior to the arrival in the Asian country -- in Canada (Vancouver) and USA (Los Angeles).  In the Philippines, the mission will begin in the capital Manila.

The initiative is sponsored by a devotee of the Holy Face, Mrs. Daisy Neves, an American citizen of Filipino origin, living in the city of Bellevue, Washington. The rector of the Sanctuary p. Carmine Cucinelli, will be assisted by Fr. Bonifacio Lopez, Filipino priest in Rome, acting as translator, religious advisor and spokesman.

Also part of the delegation will be the author and journalist Paul Badde, well known writer and scholar of the Holy Face in the international arena, author of the books "The Face of God" and "The True Icon" published in the USA by Ignatius Press of San Francisco.

Badde, who is currently working with the television network EWTN, recalls that "years ago John Paul II prophesied that the third millennium would be the millennium of Asia for the Catholic Church. In that vision, it is clear that now - in a crisis situation for the church universal - the pilgrims from the Philippines and other Asian countries are beginning to rediscover and recognize the True Human and merciful face of God in the ancient Holy Sudarium of Manoppello.”

The purpose of the mission is in line with the next special Jubilee proclaimed by Pope Francis.

In reality, the extraordinary result of the mission last year led the religious authorities and government of the Philippines to choose the Church of the Immaculate Conception of Nampicuan, in the province of New Ecija, which Fr.  Carmine Cucinelli had given an accurate reproduction of the Holy Face, as a reference center of the devotion of the Holy Face in the Philippines.   Fr.  Carmine still recalls with emotion the day of the visit and the solemn ceremony presided over by Bishop Roberto Mallari, of the Diocese of San Jose, along with two other bishops and religious, and the enthusiastic participation of a huge crowd of the faithful.

In recent months the church was elevated to become the Shrine of the Holy Face of Jesus, as a result of actions by government as well as ecclesiastical authorities:

The complex organizational network is made up of three groups of volunteers, one from each country, coordinated by Mrs Daisy Neves and composed predominantly of women devoted to the Holy Face, enthusiastic in helping in the work of spreading the devotion "for the greater glory of God."

The groups are reaching out to parish priests, carrying out awareness-raising in the areas which will be visited. The effort began with a greeting from the Archbishop of the diocese of Chieti-Vasto, Mons. Bruno Forte, directed to the bishops of the dioceses involved in the program, with reference to the purpose of the Mission. The program will be defined in the coming weeks.

The overall activities of the mission were explained for Mrs. Mercedes Arrastia Tuason, Philippine ambassador to the Holy See, during a visit to the Shrine of the Holy Face of Manoppello.  Mrs Tuason, who was accompanied by her secretary Ms Josephine Bantug and a small delegation, expressed satisfaction for the important initiative that follows the one already largely positive realized last year.

The rector of the Shrine thanked the Ambassador for her visit and for her interest in the new mission, and took the opportunity to express his deep gratitude to Mrs Daisy Neves and all those enthusiastically working in the Philippines, as well as in Canada and the United States towards the organization of this initiative which will involve thousands of people, especially in the Asian country.

Editor's note:  to see record of 2014 mission to the Philippines and the USA go to the following posts:

Posted by Raymond Frost at 7:50 PM No comments: