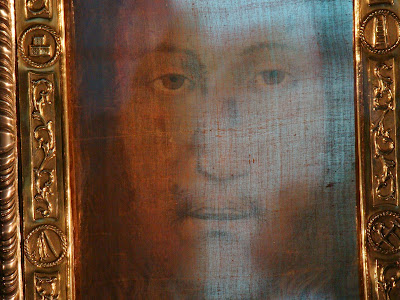 "that they may all be one, even as thou, Father art in me and I in thee, that they also may be in us so that the world may believe that thou hast sent me"
John 17:20

Posted by Raymond Frost at 8:46 PM No comments:

As the world rushes in -- as in California in 1849 or like Rome in 1300 -- this time not for earthly treasure but for the true desire of every heart the cry goes out from person to person - "Come and See". Congratulations to Paul Badde, the crew of EWTN and the Catholic News Agency for this Easter time gift on St. Mathias Day revealing to english and spanish speaking people the Holy Face of Manoppello -- the true image of the Risen Jesus. Alleluia! 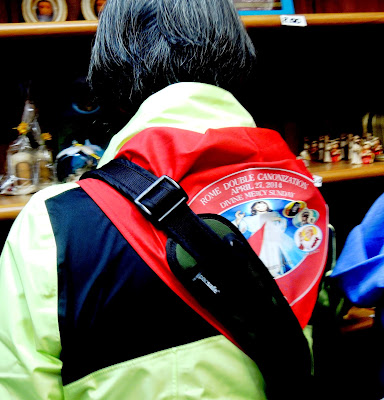 The canonization of Pope John XXIII and Pope John Paul II was an historic event for the church, closely followed by a million people present in St. Peter's Square and by means of the impressive reporting by the media around the world. The event was also intensely lived in Manoppello.

With this short article I would like to share with the readers of the blog a few memories experienced inside and outside the Basilica recorded over the period of two days in Manoppello. So many of the pilgrims coming to Italy took the opportunity to visit other shrines, among them the Holy Face of Manoppello, which was overwhelmed by groups mainly from Poland, but also from other countries such as the United States, Hungary, Germany, Austria, Spain, Lithuania , the Philippines, and many others.

The Capuchin Fathers sought to avoid the concentration of organized groups, (at least among those who had given prior notice in order to make arrangements for the celebration of Masses) so that there could be an even distribution of visits divided between the days immediately preceding April 27 and the days after the canonization.
From April 24 to May 1 the arrival of over 400 buses was recorded, to which must be added an innumerable number of cars, vans and motorcycles. 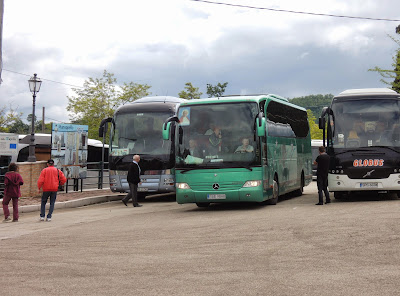 The small church was flooded by pilgrims who patiently waited in line to be able to meet the Holy Face and attend the Masses which took place non-stop each day. We have seen thousands of pilgrims from different countries share a heartfelt participation at Mass regardless of the language in which they were celebrated. 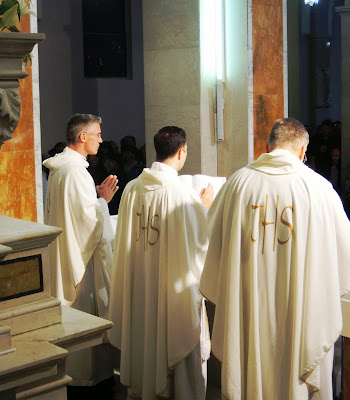 For many groups accompanied by their own priests the San Damiano room adjacent to the Shrine was made available for the celebration of Mass.

The pilgrims were mainly Poles who came to Italy in droves to attend the canonization of John Paul II , a pope who was, nevertheless, loved and remembered far beyond the borders of his native Poland. How can we forget the rise from the crowd in Saint Peter's Square , in the aftermath of his death, of the demand that he be designated "Santo subito!" "Immediately a Saint!" 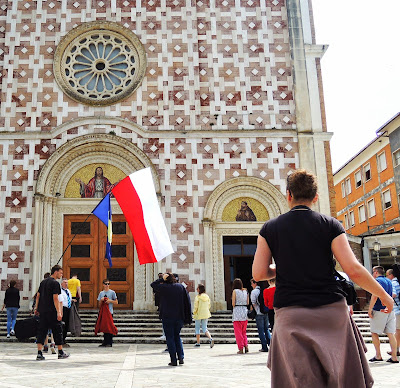 Looking at the many people excited and amazed at finding themselves close to to the Holy Face it was inevitable for me to think back to the prophetic message of John Paul II at the close of the Great Jubilee of 2000, when he - with his apostolic letter Tertio Millennium Inuente - urged the faithful to "seek the face of Christ."
Not a simple invitation, but the result of an experience of a life long faith : " Our witness would be hopelessly inadequate if we ourselves had not first contemplated his face." 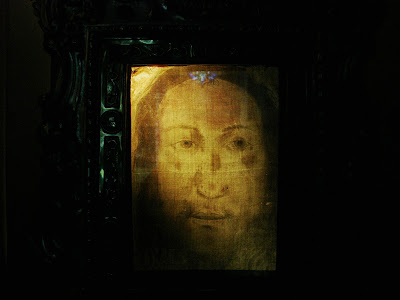 Among other things, the great Polish pope knew of the Holy Face and was linked to the Abruzzo mountains,to which he often traveled for short informal trips and hikes. A hundred times , wrote after his death, Cardinal Stanislaw Dziwisz , his former secretary, in his book "A Life with Karol" . Some years ago there were widespread rumors that the Polish pope , who was informed of the research of Fr . Heinrich Pfeiffer, may have secretly visited the Shrine of Manoppello, on a weekday, when the church was deserted. He was by himself. As he did for example in the small church of St. Peter at Ienca , which stands alone among the mountains of Gran Sasso , on the L'Aquila side, where the pope was recognized by an incredulous shepherd herding his flock.

In Italy , at the end of the solemn celebration from St. Peter's Square , the Focus television channel broadcast again the beautiful documentary film "In Search of the Face of Christ" already aired in Easter 2013 by the History Channel of
Latin America, with the title " En busca del rostro de Jesus."

And many Italians joined the foreign pilgrims on the road to Manoppello.
In the late afternoon of Sunday, April 27 , there was held at the Shrine a solemn general mass of thanksgiving for the canonization of the two popes, in Italian , Latin and Polish, with the first group of Poles arriving from Rome. 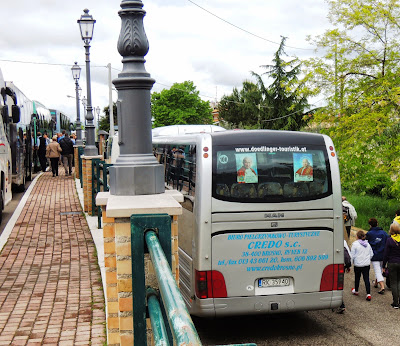 "The Holy Face is considered an extremely important relic in Poland" explained Evelina Kupidlo, young Polish guide waiting to enter the church after getting off a bus which like others were singing the praises of St. John Paul II , with photos and posters stuck to the windows of the bus.

She has already been several times to Manoppello and marvels at my question in regards to the reputation of the Holy Face and asks me: "Why is it not so in Italy?" . In Poland it is as well known as the Shroud of Turin. But then, on June 14 last year, the shrine was visited by Lech Walesa , Solidarity leader in the historic period that led to the independence of Poland, the country which owes much in this regards to Pope John Paul II. 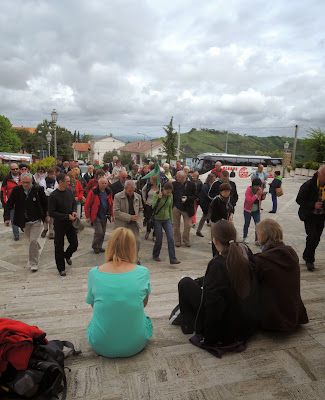 In the church and in the square outside the shrine different groups meet, greet each other, exchange opinions, take photographs. There is great enthusiasm. Many are young and do not seem to feel the fatigue. There are several groups that wear handkerchiefs around their necks as souvenirs of the canonization of the two popes. 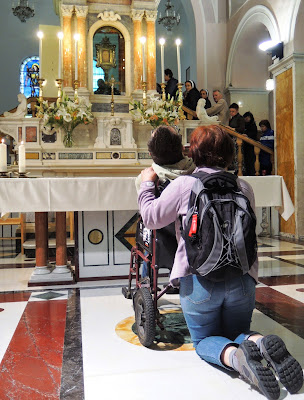 Those with disabilities are helped to come close to the altar.


Among the pilgrims who deserve mention are the Spanish seminarians from Oviedo. For them, there is the inevitable comparison between the Holy Face and the mysterious handkerchief soaked in the blood of Jesus and kept with care in the Cathedral of San Salvador in their city.

Among the pilgrims from the United States , I met a group from Louisiana, led by Father Stanley Klores , pastor of the Church of St. Patrick in New Orleans and Father Luke Melcher, from Alexandria. The latter said to me that he had learned of the Holy Face at the time of the visit by Benedict XVI on September 1, 2006 and that this was the second time he had been to Manoppello. When Fr Luke asked me why I was asking him questions about this I told him that I would probably be writing an article for the blog Holy Face of Manoppello. He seemed surprised about this saying that he knew the blog. 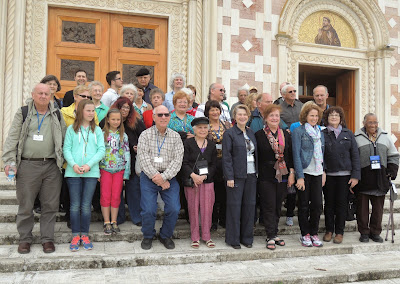 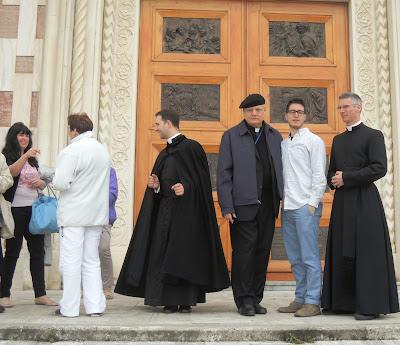 
Also joining the group was Father Anthony Denton, originally from Melbourne, currently rector of Domus Australia, the new reception center in Rome for pilgrims from Australia, inaugurated by Benedict XVI on October 20 2011, in the presence of Cardinal George Pell of Sydney.

At the same time Sr. Blandina explains the characteristics of the Holy Face to an Austrian group , which painstakingly manages to reach the premises of the exhibition.
The few Capuchin fathers have welcomed thousands of people daily , with the humble and precious collaboration of the religious sisters present in Manoppello who belong to various religious orders and nationalities : Sr. M.Immaculata , Sr . Pia and Sr . Clare, all Polish , of the Spiritual Family of the Holy Blood , who opened their house in Manoppello in the summer of 2010 ; Sr . Petra -Maria Steiner, of the German religious community "Vita Communis " and Sr . Laura , of the Alcantarine convent of Manoppello. 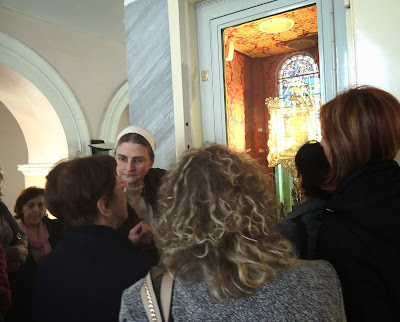 Sr. Petra-Maria Steiner speaking with the pilgrims about the Holy Face 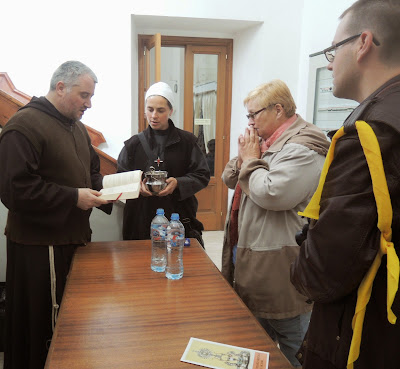 
Extraordinary hospitality of the young Polish nuns serving the thousands of their countrymen. We have seen their emotion and hugs with many pilgrims , who were trying to delay as much as possible their departure. Everyone wants to bring along a picture of the Holy Face . For the period of a week there has returned from Umbria also Father Czesław Gadacz, Polish Capuchin , who left a great impression during his assignment in Manoppello.

After May 1 when the waves of pilgrims had subsided, Sr. Immaculata tells me that it was exciting to meet so many of her countrymen and learn of their devotion to the Holy Face.

Now Manoppello is preparing for the annual celebration on the third Sunday of May.

Posted by Raymond Frost at 3:51 PM No comments:

Focus TV of New Orleans on Devotion to the Holy Face 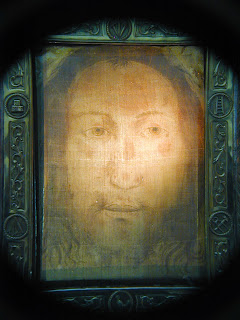 An inspirational interview with Patrick Enk conducted by Lisa Flood of Focus TV of New Orleans shows the importance of devotion to the Holy Face as articulated by Popes John Paul II, Benedict XVI and Francis. During the program Patricia who is a member of the Carmelite Secular Order as well as an artist, speaks of the history of the devotion to the Holy Face especially since the 1800's and how it relates to the Veronica image, the Shroud of Turin and the Holy Face of Manoppello. She stresses the need for Eucharistic adoration and praying with the Holy Scriptures. Patricia's description of her visit to Manoppello and her experience of gazing upon the Holy Face there is particularly eloquent and very moving. She has compiled a book of prayers entitled "Devotion to the Holy Face" which can be ordered at www.focustvonline.com
Posted by Raymond Frost at 9:53 AM 1 comment: