by Paul Badde, from the official publication of the Shrine of the Holy Face, Il Volto Santo di Manoppello, December 2009.

"At his feet the flickering light was concentrated on something of an indefinable quality, as the wind is able to capture the quavering of a burning bramble thicket in the bush. It had the appearance of golden bronze. If it had remained together with the other cloths on the stone slab, Peter would not have even seen nor felt it with his fingers, because it was very soft and delicate. Only with the light on the pavement was he able to become aware of it. It would not have been possible to notice it on the slab where no light had yet arrived. Because of the low entrance the tenuous rays of light were able to shine only on the pavement. On top of the stone slab the burial cloths remained in the darkness.

Only on the pavement had Peter been able to recognize something, and that which he saw was a fabric as delicate as a breath and so fine that Peter would not have even been aware of it had it remained lying flat on the ground. But it was rolled up, wound around itself. The greek word entetyligmenos which John used must have this meaning. An expression which thus clarifies at least one thing -- it wasn't flat. It was like a breath, but in some way was recognizable as an 'object', a 'material thing' which was captured in the dawn's early light. This is clear. Peter bowed down and picked it up. It was the precious fabric which had been placed on the face of Jesus, made from the finest silk from the sea. It was as light as the feather of an angel. When Peter picked it up he unrolled it and held it against the light coming from the entrance. How else could it be? He didn't direct it towards the darkness of the chamber, inside, but outside against the light. For it was a fabric of light. That reacted to the light. 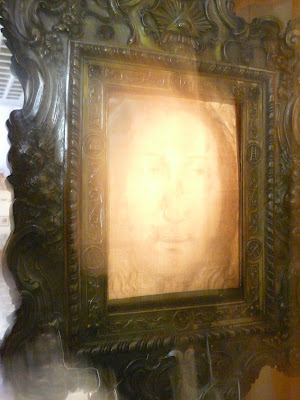 That which Peter witnessed on that veil held in the direction of the morning light at that moment in the tomb suddenly made it as clear as the sun, no one had taken the Lord away from the tomb. Jesus was not stolen, taken away. Something totally new had happened in the world. That which Peter, in those hours of tenuous light on the first morning of Easter, had recognized on that transparent fabric, in the transparence against the light of the entrance, was an event that had never happened before. It was a veil 'not made by human hands' it would be said later. It was the True Image"
Posted by Raymond Frost at 2:10 PM No comments:

"Why then didn't Peter hurry outside to go with John to the Roman Governor? why then didn't he cry out 'they have taken away the Lord'. When didn't he immediately look for the other apostles to decide with them what to do, or to go to the Sanhedrin to complain with all the force he could muster, 'it's not possible! You first put to death our Teacher and afterwards take away in secret his body. He is a Jew like us. Doesn't he at least have the right to the peace of the dead? What other sacrilege do you still want to commit?' Was he too afraid to do this? Why didn't he run with John to Joseph of Arimathea and to Nicodemus who had placed Jesus in the tomb and had arranged for the great stone to be placed before the entrance. Why not? Because the thread of the story continues very differently from what the Madalen had said regarding her experience and observation. 'They have taken away the Lord from the tomb and we don't know where they have laid him'. Peter himself didn't show himself to be wiser or more prophetic than the Magadalen. There was no other possibility other than the fact that Jesus had been taken away. In what way? Perhaps by the Romans, perhaps by thieves or by who knows what other persons. But one thing was certain -- he was no longer there! He had simply vanished.

This is how the women interpreted what had happened and also Peter as well, but with one difference. He 'saw the wrappings unfolded and the sudarium that was placed around the head of Jesus', we read in the Gospel, 'but (the sudarium) was not with the wrappings, rather folded in a separate place'. Let's not forget that it was still very dark when Mary Magdalen arrived. The entrance to the tomb opened towards the east, towards the walls of the city. There the dawn rises very slowly. A weak morning light succeeds in penetrating through the opening of the rock in that hollow of small dimensions. This was the difference. Peter unexpectedly recognized something else in the dark on the pavement."

by Paul Badde
from the official publication of the Shrine of the Holy Face Il Volto Santo di Manoppello, Dec. 2009
Posted by Raymond Frost at 2:52 PM No comments:

continuing my translation of Paul Badde's article from the official publication of the shrine of the Holy Face of Manoppello Il Volto Santo Santo di Manoppello, December 2009

"It would be helpful to take a look at the road leading to the tomb of Christ, in company with Peter and John. Mary Magdalen had run in a hurry to them "early in the morning when it was still dark" and had alarmed them "they have taken away the Lord from the tomb and we don't know where they have laid him". Was this meeting perhaps at a refuge at the feet of the Mount of Olives or on Mount Sion? We don't know. To travel the road to and from Mt. Sion would have taken around a quarter of an hour, while to go to the Mount of Olives and then return would have required double that. And then the effort would have been tiring, uphill, towards the city and around the walls of the city. All this remains unspoken. Could the Magdalen have been able to see inside the tomb without any light? We don't know. In the darkness she had seen that the massive rock which served to close the entrance had been removed, rolled away, writes John who in the pre-dawn hours had hurried to the tomb together with Peter. Had it already begun to grow lighter? It's possible but at Jerusalem the dawning corrresponds to a rather brief period of time. "Then Peter and the other disciple left and headed for the tomb" it is nevertheless written in the Gospel. "They ran together but since the other disciple was younger, he arrived first. He bent down and saw the cloths laid out but did not enter into the tomb". John had to bend down. Still today we note how low the entrance was. The things which could been able to have been distinguished in this room, from the outside, could not have been many. But why then didn't he enter. Certainly partly due to the religious respect towards tombs which is held by every devout Jew. John had been under the cross. He knew that Jesus was truly dead. Respectful also was Simon Peter, and also no less devout. But he was certainly in a state of total confusion. Peter was beside himself from the moment two evenings before when he had betrayed three times the dearest person in his life, and this in the hour of his greatest suffering. Now he ran behind, but wanted to enter immediately into the burial chamber. No one could have been able to stop him. After the disturbing news from the Magadalen he had to enter, he had to verify what had happened. It wasn't much. He saw the cloths lying there, writes John, but without candles, without light, in the weak light of the fleeing night which would be able to penetrate through the narrow opening, we can think of this "seeing" without a doubt more as a touching and feeling. How could it be any different? The cloths were liturgically impure, as the rest of the tomb was. There it was fully dark, above all to the right, alongside the entrance above the stone slab where Jesus had been laid. Then Peter touched and "saw" the cloths and immediately understood, he is not here! There was no one there anymore. Again another time he felt the various cloths on the bed of stone. Jesus was not there any more. There was no doubt!"
Posted by Raymond Frost at 1:08 PM No comments: