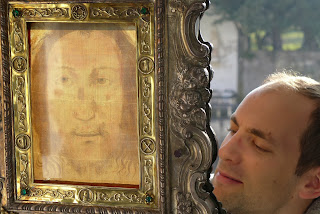 In these days the attention of the American Catholic media has been attracted to the Holy Face of Manoppello. Alan Holdren, after a visit to the Shrine of the Holy Face has written an article with photos for the Denver, Colorado based Catholic News Agency. http://www.catholicnewsagency.com/news/manoppellos-holy-face-shrine-sees-uptick-in-us-interest/. A series of articles on the Holy Face is planned by the journalist.

EWTN (Eternal Word Television Network) based in Birmingham, Alabama but with a worldwide audience will be reporting in the near future on the Holy Face of Manoppello. Their camera crew was recently on location in Manoppello to do some filming, among their guides were author Paul Badde and the Rector of the Shrine of the Holy Face, Fr. Carmine Cucinelli, O.F.M., Cap. seen in the photo below observing the Holy Face in the open air outside the Basilica. 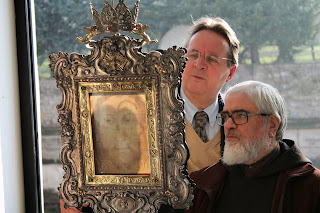 A more thorough informing of the American Catholic public about the Holy Face of Manoppello is in progress.

Posted by Raymond Frost at 8:04 PM No comments: 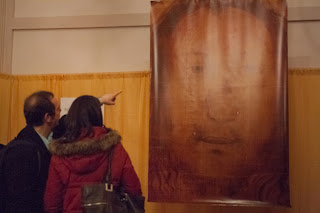 
In the context of the New York Encounter, the yearly cultural event organized by the catholic movement Communion and Liberation, visitors from all over the States have attended the guided tour to the exhibit "the Face of Jesus: from that gaze, the human face is born".
The exhibit, dedicated to the tradition of the acheiropoeita, the images of Christ not painted by human hands, focused on the "Holy Face of Manoppello", the precious relic that has been held since 1660 in the Capuchin monastery of the town of Manoppello in Abruzzo, Italy. 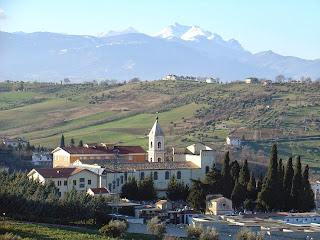 The exhibit documents how the desire to see the Face of God has been present in the life of the Church throughout the centuries and is still the object of modern man's profound nostalgia.
All the guides were volunteers that had been trained by the Italian curator of the exhibit, Ms. Raffaella Zardoni. 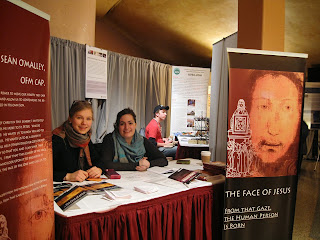 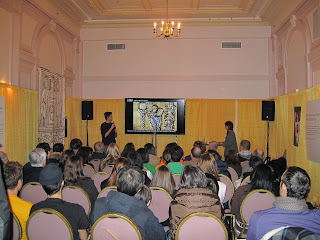 About a thousand people visited the exhibit; among the guests his Excellency Mons. Carlo Maria Vigano', Apostolic Nuncio to the United States of America and to the Organization of American States.
The Mayor of the town of Manoppello, Mr. Gennaro Matarazzo came to New York expressly for the event. He was present for the entire weekend, and was warmly welcomed by the visitors. "I will never stress enough the importance of this exhibit for all of us who are visiting it and, if I am allowed to say it, for the whole Church and believers. I keep receiving text messages from the citizens of Manoppello, asking how the exhibit is being welcomed in New York". Mr. Matarazzo said. 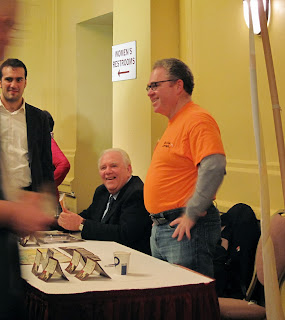 photo of organizers of New York Encounter and at the center Mr. Gennaro Matarazzo, Mayor of Manoppello this photo and two photos immediately preceding by Raffaella Zardoni


“Several things about the presentation on the Face of Jesus exhibit, and particularly the Veil of Manoppello, really moved me”, Mr. Henry Artis, Painter, said after viewing the exhibit. “First, that at a certain point in history the desire to see the “face” of Christ stopped. I am really intrigued by this because it indicates that something changed, a something that was greater than the sack of Rome.
Second, that we, in a time of extreme individualism in which “faces” merge into a faceless mass would once again be prompted by the gesture of Pope Benedict XVI to turn toward a particular “face”, the face of the one we love. 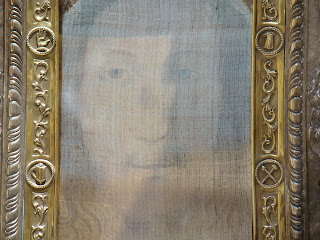 Third, the fact that Christ would even have the desire to leave an imprint of his face on Veronica’s veil makes the question “Why?” immediately arise.
Fourth, that like Juan Diego's tilma, Christ’s portrait is left on a surface that does not hold paint and with unknown pigments.
Fifth, the fact that Christ wants “to see” and “be seen” points to the fact that his humanity is so truly human. This, I believe, is vitally important because the desire to “be seen”, to be acknowledged, by the person I love is one of two deeply rooted needs that I have, and the second is that I want to see the one seeing me in order to see what kind of gaze it is. Because the look in the eyes of the one I love looking at me tells me everything. 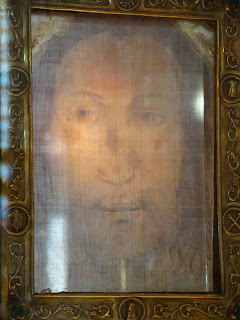 And that leads me to my sixth point. When I looked at the eyes of Christ on the Veil of Manoppello they showed an ocean of paradoxical emotions that are hard to describe and that no artist was able to catch. I saw in the eyes a certainty and a pleading, a love and a begging for love, a willingness and a regret…in short, I saw the gaze of a real man begging for my gaze, a gaze full of His love.
I am really thankful that the exhibit was put on and that I was able to see it during the New York Encounter”. 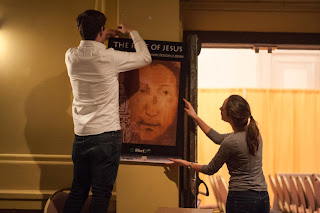 photo by Nicholas Erickson
Posted by Raymond Frost at 9:36 PM No comments:

Procession with the Veronica

The following english translation is that of an article which appeared in the July 2013 edition of Il Volto Santo di Manoppello, the official publication of the Shrine of the Holy Face of Manoppello

The true founder of the cult of the Veronica was Pope Innocent III (1198-1216), under whose pontificate there took place the conquest of Constantinople by the Crusaders. It is due to him that the Veronica was transformed into a universal symbol of the Church, unlike the image of the Savior in the Sancta Sanctorum sketched by St. Luke and painted by the angels, whose veneration remained a phenomenon limited to Rome and towns in the region of Lazio. In 1208 the Pope instituted a procession with the Veronica, which traveled from St. Peter's to the Santo Spirito Hospital which Innocent had founded. In addition, the Pope transferred the status of "station church" assigned to the second Sunday after Epiphany from the church of Sant'Eustachio to that of the church of Santa Maria in Sassia, situated close to the Santo Spirito Hospital. As explained by the Bull and the preaching of Pope Innocent upon its institution, the procession was intended to be a liturgical commemoration of the Wedding of Cana in the course of the festivity of Epiphany. On that occasion donations were made to the poor and the pontiff preached each year on works of charity (which according to the exegesis were symbolized by the stone water jars of Cana). Although there is included also an image of Mary, the Wedding of Cana was accomplished between the image of Christ and the observer, a salvific anticipation of that marriage between the human soul and the heavenly grace that will take place at the end of time. Pope Innocent established that, during the celebration of the feast the image of Christ should be exposed in an exquisite capsa (case)of gold and silver decorated with precious stones. The transmission of salvation happened through the remission of sins provided for through taking part in the procession. In 1216, a year of great difficulty for Innocent, the following miracle was verified: the face of Christ on the cloth turned upside down so that the beard was shown on top and the forehead down below. As related by the english historian Matthew Paris, monk of St. Alban's, in his chronica maiora of 1240, we also learn that, following this event, the pope composed an elegant prayer that provided to whoever recited it an indulgence of ten days. This text speaks of the sudarium of Veronica which God had left to mankind as a memento (equal to a reminder)and alludes at the same time to the face to face encounter with Christ at the end of time. The Veronica thus was considered on the one hand retrospectively, in as much a testimony of the earthly events of Christ, on the other hand in a future perspective as a guarantee and anticipation of the intimate vision of God (the visio beatifica)

Posted by Raymond Frost at 6:45 PM No comments:

based on a flyer for the exhibit on the Holy Face

New York Encounter is an annual three-day public cultural festival in New York City, organized by members of the Catholic movement Communion and Liberation and by the Crossroads Cultural Center


THE FACE OF JESUS: FROM THAT GAZE, THE HUMAN PERSON IS BORN 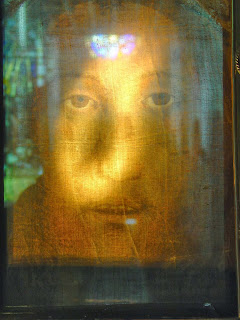 The exhibit is open to the public and free of charge New York Encounter invites you to a weekend of public discussions, exhibits, presentations, and live performances exploring the nature of the person and the flourishing of that person in belonging to a people. Our hope is that New York Encounter itself can give witness to the life of a people whose heart has been reawakened by an encounter with a human presence.

The exhibit retraces the events of the most ancient portraits of Christ, called acheiropoietos (i.e., not made by human hands) and, in particular, of the Veil of Manoppello, Italy, visited in 2006 by Pope Benedict XVI during his first papal trip.

Recent studies have re-opened the question of whether this veil, because of its unique
features, might be the one used by Veronica to wipe Jesus' face on His way to Calvary. The exhibit will document how the desire to see the Face of God, which characterizes the Old Testament, has been present in the life of the Church throughout the centuries and is still the object of modern man's profound nostalgia.