The First Exhibition of the Holy Face

THE FIRST EXHIBITION OF THE HOLY FACE

Strongly desired in 1977 by Father Domenico da Cese, it is to be considered at the origins of the modern history of the Holy Face

On September 17, 1977, the participation of Pope Paul VI  in the 19th National Eucharistic Congress  taking place in Pescara with the theme "The Lord's Day" was greatly anticpated. With respect to more recent years, earlier popes had rarely left Rome. It was therefore an event of extraordinary importance, accompanied by publications and a dense program of conferences and exhibitions that animated the city for a whole week, from  September 11 to 18, 1977. A program with a lengthy period of preparation by the dioceses of Abruzzo but the Holy Face had been completely ignored and excluded from any event, exhibition or publication.

Father Domenico da Cese found this situation unbearable, courageously deciding to set up an exhibition dedicated to his beloved Holy Face, using space on the ground floor of a small building that was fortunately available to the Capuchin Order, in the center of Pescara, a very short distance from the passage of the papal procession and from the square where the final Mass would take place.

From the few images available, reproductions of the Holy Face, testimonies, holy cards and prayers are displayed on simple wooden stands, along with two large panels in the entrance courtyard of the exhibition resting on tripods and with light bulbs to illuminate them. 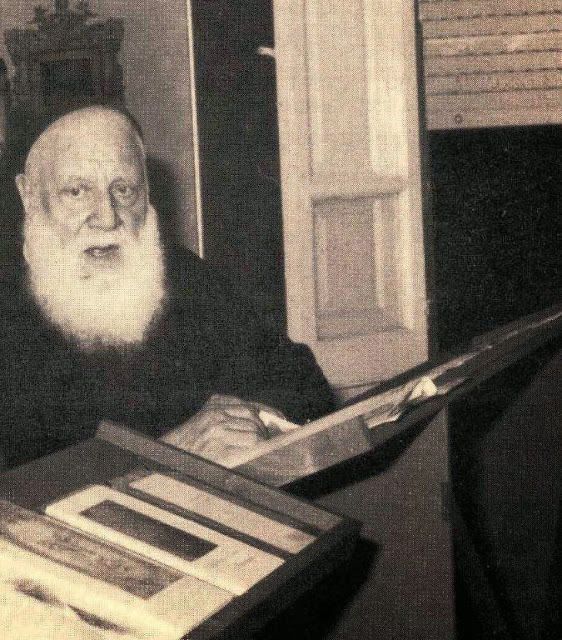 Newspapers reported the presence of over 200 thousand people September 17,  also coming from foreign countries. In those days and for a whole week Pescara was inundated by many people from Italy and abroad,  to take part in events that saw the participation of well-known figures from the Catholic world, such as Mother Teresa of Calcutta. 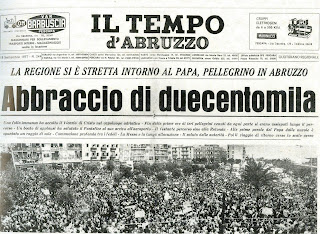 The magazine of the Shrine of the Holy Face - Il Volto Santo di Manoppello - , in the issue following the event (n.2 / 1977), published only two photos of the exhibition, underlining that it had been visited by many people.

For this occasion, photographic reproductions, testimonies and publications were exhibited in a simple and basic setting. It should be remembered that it was only in those years that photographic prints began to be able to effectively reproduce the image of the Holy Face, also in color. Some enlargements, the first ones realized in 1971 by the photographer Gianni Cati, are still exhibited in the Manoppello Shrine's "Sala del Tesoro", in which the "ex voto" are displayed.

Father Domenico's first biographer, the scholar Bruno Sammaciccia, wrote regarding the exhibit "Father Domenico was enthusiastic for having achieved his noble desire "(1979).

The exhibition actually marked a new phase in the popularization of the Holy Face that expanded the traditional knowledge of the Shrine of Manoppello, with effects that would be progressively realized in the immediately following times.

Renzo Allegri, the writer and famous biographer of Padre Pio, also heard about the Holy Face.  His biography of Padre Pio has been translated into various languages ​​(in the USA his book was published a few years ago under the title "Padre Pio, the man of hope").

The year after the Pescara exhibition, Allegri wanted to go to Manoppello, at the same time that Fr. Domenico had left for Turin to go and see the exposition of the Shroud. The writer was welcomed to the Shrine by the then superior, Fr. Luciano Antonelli, recently assigned to the friary, who did nothing else but describe the Holy Face, following the theses supported by Fr. Domenico.

This circumstance was confirmed to me by Fr. Luciano, currently in the Capuchin friary of L'Aquila, who confessed to me that he had repeatedly listened to the explanations that Fr. Domenico gave to groups of pilgrims visiting Manoppello. On the other hand, the explanation of what the Holy Face was and its authenticity were well explained on holy cards printed in his name by Fr. Domenico.

Allegri wrote his article for the large circulation Italian weekly magazine Gente, with the title "A Little Shroud in Abruzzo: It is the Holy Face of  Manoppello", wanting to build on the attention which in that period was being given to the Shroud of Turin.

The article was published in the September 30 issue, a few days after the funeral of Father Domenico, and then was translated and published in its entirety in the November 1978 issue of the Swiss Catholic magazine "Das Zeichen Mariens" (in English "The Sign of Mary"), published in German at St. Gallen, by Mr. Paul O. Schenker.

This magazine was then read by Sr. Blandina Paschalis Schloemer, who was intrigued by it, starting her studies on the Holy Face, subsequently involving Fr. Heinrich Pfeiffer, opening a period of research unprecedented in the history of Manoppello's image.

In the autumn of 2014 I finally met Renzo Allegri, who had retired to a large isolated farm in northern Italy. He greeted me courteously, explaining that he did not remember exactly what were the origins of his knowledge of the Holy Face that had led him to Manoppello in September 1978, confirming however that he had heard talk of the extraordinary image in the months preceding his trip to Abruzzo.

During the meeting we talked about the Holy Face, the exhibit set up by Fr. Domenico, but also about Padre Pio, linked to the Holy Face and also to Fr. Domenico. Allegri was surprised to learn that his old article had been translated into German in the Swiss magazine, of which he knew nothing, showing however satisfaction with the interest that he had managed to arouse regarding the Holy Face.

Father Domenico da Cese will die in Turin on September 17, 1978, exactly one year after Paul VI's visit to Pescara.   We like to think of Father Domenico's 1977 exhibition, simple and impromptu, with his passionate determination, as the first of many other exhibitions that, more than thirty years later, were dedicated to the Holy Face and which took place in Rimini, New York, Lourdes, Lucca, Lugano, Mantua, Perugia and many other cities.

A Decade On-line with the Holy Face of Manoppello

Tomorrow marks the 10th anniversary of the first postings of this blog on the Holy Face of Manoppello on January 23, 2008.  The inspiration for the blog came from my visit to the Shrine of the Holy Face of Manoppello in November 2007.  For ten years I have been privileged to be able to publish many photos of the Holy Face and articles about the Holy Face from experts on the Holy Face such as Paul Badde, Sr. Blandina Schloemer, Antonio Bini, Saverio Gaeta, Fr. Heinrich Pfeiffer, S.J., and Fr. Carmine Cucinelli, OFM, Cap . There is a treasure trove of material on the Holy Face available to everyone throughout the world on this blog because of them! Thanks be to God and all these and others such as Fr. Germano Di Pietro, OFM, Cap., Daisy Neves, Augustine Pham, Fr. Lawrence Goode,  Patricia Enk and Deacon Christoph Sandoval who have helped me!

When I began this blog there was very little information available in English on the world wide web.  Thankfully this is no longer the case.  The word and image of the Holy Face has spread to peoples throughout the world by other websites and on social media such as Facebook.

Even more importantly  --- copies of the Holy Face coming from Manoppello have been enshrined in churches  in Rome, Poland, the United States, Canada and above all in the Philippines where a diocesan shrine of the Holy Face has been inaugurated at Nampicuan.

Here are several recent examples of Facebook postings on the Holy Face. 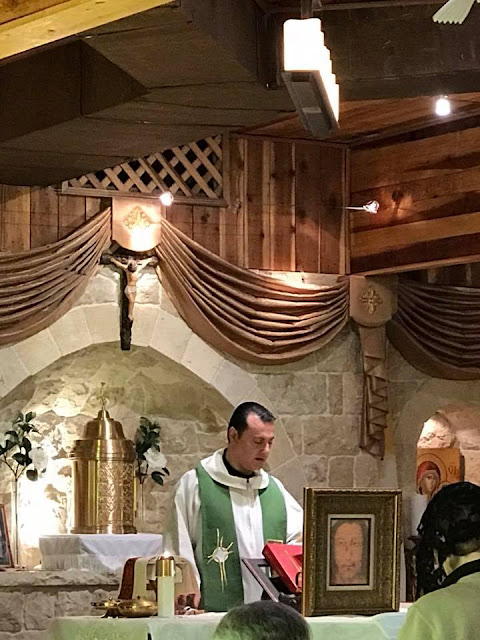 Every Third Friday of the month after the 8AM mass at St Sharbel Maronite Catholic Church in Las Vegas a Novena Devotion to the Holy Face is prayed. Fr Nadim Abou Zeid , Maronite Missionary and also Pastor for 10 yrs now welcomed the Holy Face since September 2014 when Fr Carmine, Rector of the Holy Face of Manoppello , brought the copy of the Holy Face . On September 11, 2016 the Holy Face copy was officially Enthroned by Fr Nadim and Fr Danny, Canon and civil lawyer from the Diocese of Rome. When you come to Las Vegas.. the church in 10 miles from the strip. Daily Maronite liturgy at 8am. And visit the Holy Face here which is venerated. So far, there are three other churches in the USA that have welcomed the image of the Holy Face. At Our Lady of Angel in San Diego ; St Francis of Assisi at E Palo Alto, San Francisco Bay Area; St Bede the Venerable at Flintridge, Los Angeles county. Visit them ... if you cannot go to Manoppello or the Philippines yet.  --- from Daisy Neves.

Here is a link to a video from the Facebook page of the Shrine of the Holy Face of Manoppello with the blessing at the Shrine on the feast of Omnis Terra January 14, 2018 which connects the shrine to the ancient rite celebrated in Rome during the 13th and 14th centuries at St. Peter's and Santo Spirito Churches.  Someday this rite will be celebrated
in churches throughout the world