In many parts of the world there are ancient cultural traditions which are a living part of the local regions cultural heritage and deeply formed by the Christian celebration of Holy Week. This is especially true in Abruzzo. A number of musical groups came together on Saturday,April 12, the eve of Palm Sunday this year, for a concert held in the Basilica of the Holy Face of Manoppello entitled "Passione di Gesu" .

There are a number of other videos of the event which can be found on the Youtube Channel Chorus Inside.

The gathering, which centered on the theme of The Passion of Christ, was organized by the ACLI (Association of Italian Christian Workers) of Chieti as an act of devotion to the Holy Face. Hundreds of people came to listen to 13 groups representing a number of places in Abruzzo. The event culminated with the performance by the pipers of the Associazione Zampogne d'Abruzzo. The musical numbers included especially those songs coming from the musical traditions of Abruzzo which are linked to the Easter and Passiontide rites. Around 500 choir members and musicians, belonging to a number of groups wore red berets, to symbolize the passion, and were welcomed by Padre Carmine Cucinelli and the community of the Capuchin friars. 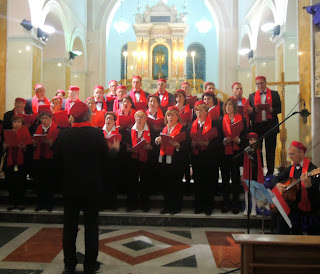 Thanks to Antonio Bini who provided information, photo and link for the video of the beautiful affair.

Several days ago the National Geographic Channel broadcast a program called "The Jesus Mysteries" which included an approximately 10 minute segment on the image of the Veronica and the Holy Face of Manoppello. The production team had been in Manoppello for filming at the Basilica a number of months ago. During the program Raffaella Zardoni describes a number of important elements of the Holy Face of Manoppello.

Posted by Raymond Frost at 7:36 AM No comments:

EWTN Releases Television Program on the Holy Face of Manoppello

Paul Badde, the leading journalist and author on the Holy Face of Manoppello, is now responsible for a television program on the Holy Face of Manoppello produced in the german language by the Eternal Word Television Network (EWTN)founded by Mother Angelica and based in Birmingham, Alabama. Soon the program will be available in english and other languages. It can be seen here at the following link.

May Easter Joy Fill our Hearts 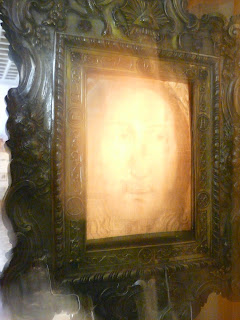 Blessings and best wishes to all the contributors, benefactors, readers and viewers of this blog during the celebration of Easter Vigil, Easter Day and Easter season!
Posted by Raymond Frost at 12:31 PM 2 comments:

Youth Minister Sees Beyond the Years

James Day, a Master in Fine Arts and Youth Minister at Loyola Marymount University in Los Angeles has written for Catholic World Report a personal commentary on how he has been inspired by recent popes and his own father, seeing in them a reflection of the Holy Face of God. "Holy Fathers, Holy Faces"

He concludes his heartfelt piece with these words.


In reading Benedict, I became accustomed to his frequent references to the Holy Face of God. “Rely on the mighty Lord,” implores Psalm 105, “constantly seek his face.” So I was pleasantly surprised to read in Francis’ Urbi et Orbi message for Christmas 2013: “Today, I voice my hope that everyone will come to know the true face of God.” It is my hope, too. That even in the dying face of one’s father one can see the face of God: obedience even in the face of death.

I marveled when I looked into this devotion to the Holy Face. I found it to be a reference to the Veil at Manoppello in the Abruzzi Region of Italy. It is said to be the “napkin” mentioned in John 20:7, which covered the head of Jesus at his burial and upon which is a vivid, startling impression of a man’s bruised face with open eyes, as if he has just awakened, startled, new life having been breathed into him. The peaceful gaze of the incarnated Agnus Dei. The Face of God, then, is not one of an agonized death, but of resurrected life. Paul Badde’s The Face of God, chronicling the incredible story of this veil, would have certainly been one to share with my father.

“‘Your face, O Lord, I seek’: seeking the Face of Jesus must be the longing of all of us Christians; indeed, we are ‘the generation’ which seeks his Face in our day,” Benedict said in his address at Manoppello on September 1, 2006. Two weeks after returning from this visit, he raised the tiny chapel housing the veil to a basilica.

I pray that my own life and death be as dignified and humble as those of the holy fathers I have written about. I certainly would not have glimpsed the divine face without them.

Posted by Raymond Frost at 5:45 PM No comments: