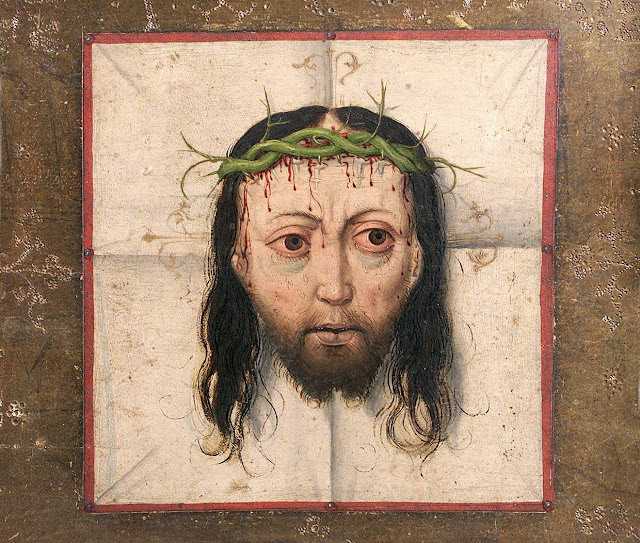 (editor's note:  this is a translation of an article by Paul Badde appearing at http://de.catholicnewsagency.com/story/exklusiv-paul-badde-uber-eine-spekaktulare-entdeckung-uber-die-grabtucher-christi-0842)

The sudaria of Christ (today in Turin and Manoppello) had a key role in the Latin liturgy of the Roman rite of the Mass already 400 years before their first public display for veneration in Europe. Klaus Berger in Heidelberg has discovered and notified us about this sensational missing link in the history of the reception of the most important relics of Christendom which he found in a mysteriously incidental way during his research for an extensive commentary on the Apocalypse.


In the course of his research on the Apocalypse of St. John the New Testament scholar Klaus Berger of Heidelberg has made a sensational discovery. He found that in Amalarius (775-850) - head of the Carolingian liturgy, the Bishop of Metz, and Archbishop of Trier, who in 844 was made a cardinal by Pope Sergius II and is considered the forerunner of a united Latin liturgy of the Roman rite - the  altar linens prescribed for the liturgy from the beginning were considered to be in direct correspondence with the cloths mentioned in the Gospels in relation to the Passion and Resurrection of Jesus Christ which in the Latin liturgical texts are called sindon or sudarium. Especially the deacon who wraps the chalice in a cloth as Jesus was wrapped in his cloth.  Literally:  Diaconus ... involvit cum sudarium calicem, quoniam Ioseph involvit in sindone munda. corporale... ipsum linteum quo totum corpus domini tegebatur in sepulchro. (The deacon wraps the chalice with the shroud. As Joseph of Arimathea wrapped the whole body of the Lord in a new burial cloth in the tomb).

And all this of course already in the Carolingian period, i.e., well over four centuries earlier than in Europe where the  Sanctissimus Sudarium (Most Holy Sudarium)  in 1208 was carried in public by Pope Innocent III for the first time from San Peter's in Rome, and well before the year 1355 when the Holy Shroud reappeared and was venerated for the first time in Lirey in the Champagne region! From this we can also understand why the altar linen, in analogy to the shroud, until 1969 had to be "pure linen," and why the so-called corporal must always be folded in a particular way by way of analogy with the Sudarium, of which John says that after Christ's resurrection was found by Peter and John in the empty tomb "not lying with the linen cloths but rolled up in a separate place." That corporal is the starched cloth which in the old rite, after the priest had come at the altar in contact with the bread and wine, could only be touched by him reverently with his thumb and forefinger.

Since the altar linens of the liturgy are called sindon and sudarium and theologically are in connection with the real presence of Jesus in his body and blood, it follows according to Klaus Berger this directed their "setting in life" [ "Sitz im Leben"] within the liturgy in regards to what is the scope of their purpose which is to point to the mystery of the Eucharist on the altar stone, where the inanimate matter of the bread and wine - as the tomb of Christ in the rock in Jerusalem, which had never been used - is always transformed into the "bread of life" and living blood of Christ.

The depiction of the face of Jesus on these cloths instead could be understood similarly to the so-called Mass of Pope Gregory: Gregory I (540-604) saw appearing to him a bloody Lord directly in connection with the transformation of the Eucharistic species. The shroud and the sudarium of Jesus would therefore be understood as the direct expression and personified the real presence of Jesus on the altar and would be directly related to the Eucharist as the center of the holy Mass. In this way they agree as biblically confirmed evidence of the resurrection of Christ with the mystery of the Eucharistic transformation. You could therefore say: Instead of the vision of Gregory, in Amalarius there is a real symbolic content of the altar cloths. In both cases it is an expression of the real presence of Christ. What is true for Pope Gregory the content of the vision, namely, the real bodily presence of Christ (particularly of the suffering Christ), according to Amalarius would be expressed sensibly ( "sinnenfällig") in the liturgical altar linens. On the burial cloths, showing the stigmata on the shroud and on the sudarium the face of Jesus, there appeared a lasting imprint of what happened for an instant in Gregory's vision.

In correspondence with this the cleanliness of these cloths would also point to the connection with the purity of the body and the heart of the concelebrants.
Posted by Raymond Frost at 11:33 AM 1 comment:

Premiere Showing in Manoppello of Documentary on Holy Face Pilgrimage Procession from St. Peter's to Santo Spirito in Sassia


I received this welcome letter from Antonio Bini earlier today

I am sending you the poster for the premiere showing of the documentary which will start at 6:30pm on Saturday June 4, 2016 in the San Damiano room, adjacent to the Basilica of the Holy Face of Manoppello.

The documentary, which lasts approximately 25 minutes, features the commemoration - which took place January 16, 2016 - of the Veronica procession, from St. Peter's Basilica to the Church of Santo Spirito in Sassia, initiated by Pope Innocent III in the year 1208. The documentary, produced by Paul Badde and directed by Marco Gandolfo, will soon be aired on the German language portion of the EWTN  Catholic network.  An upcoming version in English will air on EWTN in the USA.

It was Paul Badde himself who desired that those who carried the Holy Face, as well as the choir of the Basilica and many others from Manoppello who participated in the Roman procession could have the opportunity to see the documentary before it is aired.

For Paul Badde  the screening of the documentary is also an opportunity to thank the citizens of Manoppello who prayed for him during his difficult post-operation recovery which included a period of three months of hospitalization in a Munich hospital. As soon as his strength allowed him Badde returned to complete this important documentary that begins with historical notes on the ancient hospital of Santo Spirito in Sassia and then on the event established by Innocent III which, in fact, began the devotion of the Veronica in Rome. The film then reprises the procession as it proceeds from St. Peter's Square to the Basilica and then in the direction towards the nearby church of Santo Spirito in Sassia.

The video is to be considered an authentic historical document as it includes an extensive summary of the homilies of the Prefect of the Papal Household, Archbishop Georg Ganswein, and Lebanese Archbishop Edmond Y. Farhat, who each make explicit references to the authenticity of the Holy Face. The documentary suceeds in capturing the mystical atmosphere of the precious church of Santo Spirito in Sassia, with footage (at times three cameras were in use) which gives a broad idea of ​​the crowd of devotees, whose emotion is stressed during the interview with Msgr. Jozef Bart, Polish rector of the Basilica of Santo Spirito in Sassia. I was there and I can testify to that. The flowers that you see at Santo Spirito in Sassia were donated by Daisy Neves.

Paul will not be present at the showing of the documentary in Manoppello because he still is in need of rest.

Antonio
Posted by Raymond Frost at 2:52 PM No comments: