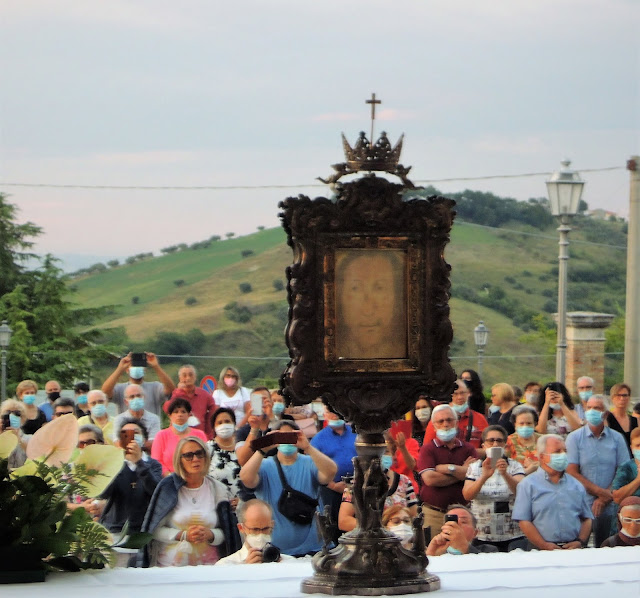 On August 6 the Church remembers the Transfiguration of Our Lord, celebrated every year for centuries at the Basilica of the Holy Face of Manoppello. Despite the special conditions linked to the emergency stemming from the  Covid 19 epidemic - the event was held in its strictly religious dimension, with the solemn Mass celebrated in the church plaza in front of the Basilica, with spaced chairs and the requirement of masks. 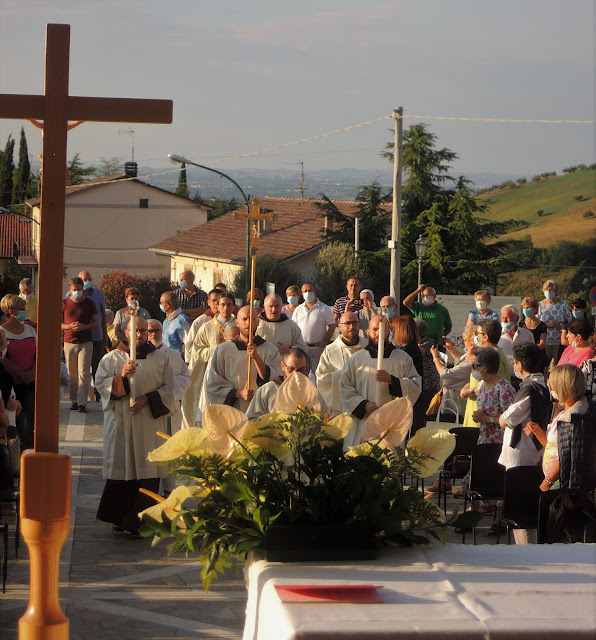 The small crowd of devotees, gathered in silent prayer, participated in the solemn Mass presided by Fr. Matteo Siro, recently elected provincial minister of the new Capuchin province of Central Italy, which since July 3 combines the prior historical provinces of Abruzzo, Lazio and Umbria. Present were a number of Capuchins from other monasteries. The Mass was accompanied by the choir directed by Maestro Nicola Costantini.  The mayor of Manoppello, Giorgio De Luca, was also in attendance.

The rector of the Shrine, Fr. Carmine Cucinelli, thanked Fr. Matteo Siro, underlining that his presence coincided with a significant anniversary for the monastery, as four centuries have passed since the Capuchins arrived in Manoppello in 1620, at the urging of the local community. Fr. Carmine recognized and greeted the devotees of the Holy Face following the service on social media scattered in various countries of the world and, in particular, in Canada (Vancouver, Toronto), the United States (Los Angeles, San Francisco, etc.) and the Philippines, first of all from Nampicuan and Taguig. He related that because of Covid 19 the procession held annually in Richmond Hill (Toronto) could not take place.  It was in 1983 at Richmond Hill that the first replica of the Holy Face was enthroned, by emigrants from the Val Pescara.

During the Mass, Fr. Matteo Siro, recalled the particular meaning of the feast in the context of the Holy Face, referring to the Gospel of Luke and inviting those present not only to look upon, and be looked upon by the Holy Face, but above all to "listen to Him". Thinking about the four centuries of presence of the Capuchins, he thanked the local communities for the affection shown to his confreres. At the end of the Mass, Fr. Matteo Siro blessed, with visible emotion, those present with the reliquary of the Holy Face, and brought back the sacred image in procession together with the Capuchins to the church, where the prayer vigil continued.

Many people followed the celebration via live streaming on the Shrine's Facebook page https://www.facebook.com/basilicavoltosanto/videos/780654232704943 , while a short video was posted on the Facebook page of the EWTN television network by the American journalist Alan Holdren who was present for the celebration.  Video of Blessing with the Holy Face by Fr. Matteo Siro at the Conclusion of Mass

Posted by Raymond Frost at 11:25 AM No comments: 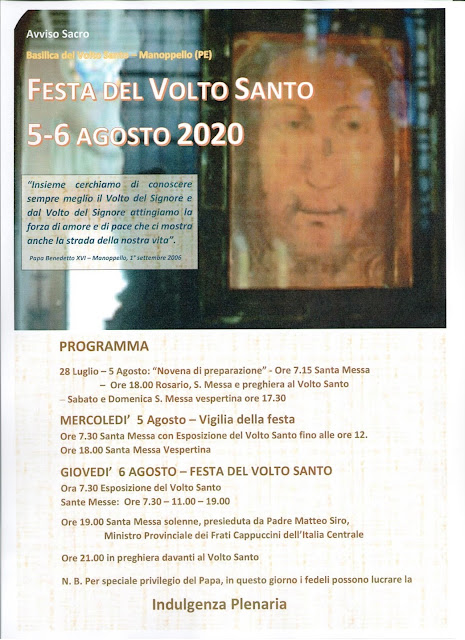