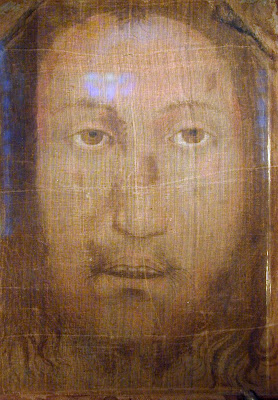 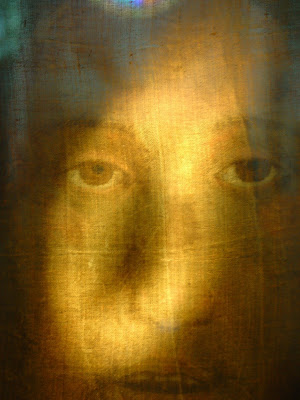 We thank you O Lord for the vision of your glory, a glimpse that we have even in this life of the eternal glory which is to come. We thank you Father for sending Jesus in the flesh, that he might become our very life. We thank you Holy Spirit for revealing the face of Jesus anew to the people of our time, the face of many faces, the face for every face. We thank you Jesus for humbly waiting, quicken our minds to know you! We thank you Mary, Mother of the Holy Face, whom you knew always and now as Son and God. 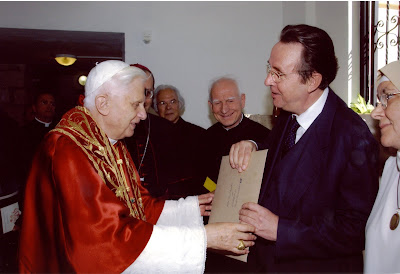 An interview with Paul Badde regarding the Holy Face of Manoppello conducted on November 9 by Francesca Maxime the co-host of the Currents Catholic newsmagazine is available on the internet. This is part of Badde's booktour in the USA to promote his book which has just become available The Face of God, the Rediscovery of the True Face of Jesus on the Holy Face of Manoppello.

click on the link below to see the interview

In 1978 the Servant of God Father Domenico da Cese, Capuchin Friar and friend of Padre Pio, Guardian of the Shrine of the Holy Face in a small town named Manoppello about 150 miles east of Rome, made a decision. A Eucharistic Congress for all of Italy was scheduled to be held in the city of Pescara, about 30 miles from Manoppello, and Fr. da Cese wanted those attending to know about a mysterious holy image of Jesus. So he had posterboards made to hold large photographs of the amazing image on both sides of a gossamer thin transparent cloth which had been venerated for more than four centuries in his secluded hill top town between the famous glacier Gran Sasso and the Adriatic Sea.

His decision set in motion a process which brought people from around the world, and ultimately even Pope Benedict XVI himself, to Manoppello to contemplate the Holy Face of Jesus. But the first person from outside Italy to take the image to heart was a Trappistine Nun, Sr. Blandina Paschalis Schloemer, belonging to a cloistered convent in Dahlem, Germany. She found by patient study that this image of Jesus was a perfect match for the face on the Holy Shroud and sent the results of her research to professors at the Jesuit Gregorian University in Rome. One of these professors, Father Heinrich Pfeiffer, specialist in the history of Christian art, after making a visit to Manoppello, immediately had the intuition that the image was nothing less than the Veil of Veronica (true image) which for centuries had been venerated at St. Peter’s Basilica drawing great numbers of pilgrims to Rome from all over Europe.

Twenty five years after the Eucharistic Congress in Pescara, Paul Badde, the Rome and Vatican correspondent for Die Welt, one of Germany’s leading newspapers, was on his way to San Giovanni Rotondo to report on the new Basilica being built in memory of St. Padre Pio. Having spoken briefly several years before with Fr. Pfeiffer who had told him of the Holy Face of Manoppello, Badde decided to make a brief visit to the shrine in Manoppello to see it for himself. His book, The Face of God, the rediscovery of the true face of Jesus on the Holy Face of Manoppello, was conceived at that moment. The story of his growing fascination and love for this image as well as for the Capuchin friars and for the people of Manoppello who have for centuries been the guardians of this holy image has driven him to make it known throughout Europe and now in America and the English speaking world.

Part mystery, part history, part theology, part psychology, following in the tradition of Catholic pilgrimage authors such as Dante and Chaucer, and utilizing all the means available to a respected and competent journalist, Badde draws us along on his journey to meet the people who lead him to deeper knowledge of this image which had been nearly forgotten for centuries.

Badde’s wife Ellen plays a crucial role as helper and advisor, at critical moments, as to where he should go or with whom he should speak. The dialogues between Badde and Sr. Blandina, with whom Paul and Ellen share a meal of shellfish, lead to the discovery that the fabric of the Holy Face is marine byssus, the most precious material of the ancient world, a “silk from the sea” made from the hairs of a Mediterranean sea mollusk. His discussions with Fr. Pfeiffer shed light on how the image was taken from the Vatican during the construction of the “new” St. Peter’s Basilica in the 16th and 17th centuries and why the Pope and Vatican officials at that time contrived to cover up this loss by substituting a poor copy. This sad copy continues to be displayed once a year from the high balcony of the massive pillar at St. Peter’s above the huge statue of St. Veronica holding the veil. Badde was the first journalist allowed to enter the chamber in which the copy is stored and verified for the world that nothing at all of an image can be seen on the cloth. What is more Fr. Pfeiffer convincingly leads Badde to the earthshaking conclusion that the Holy Face in Manoppello is the very cloth that is spoken of in John 20:8 – the face cloth that was set apart from the other burial cloths in the tomb of Jesus on that Easter morning when Peter and John “saw and believed”. From the burial cloths, witnesses to the life, death and resurrection, the early church drew faith, hope and charity. These wrappings, with their miraculous images now in Turin and Manoppello, became in the first centuries of the Church the original models for all the icons of Jesus.

What can be seen all day, every day, in a glass enclosed case just above the tabernacle in the elegantly simple little Church in Manoppello, is an image of Jesus which appears and disappears depending on the light. During Mass or at other times of the day one can contemplate an image of Jesus unlike any other. His expressions change before one’s eyes. His gaze seems to be that of living person, almost one who is speaking. A person who has suffered and still bears the marks of that suffering but who loves and seeks to be loved. One can climb the stairs behind the altar and see Jesus face to face, eye to eye, and because of the unique nature of the fabric, see yourself in the image. As Dante was able to write in the finale of his Divine Comedy “deep within, painted in a shade of the same color, Appeared to me our likeness – And through this I discovered my own face.”

On September 1, 2006 Pope Benedict XVI made a visit to the Shrine in Manoppello and stayed for a long time in contemplation before the Holy Face. He urged us all to seek the face of Christ. One year later he composed a special prayer to the Holy Face and just a few days ago he accepted the keys to the town of Manoppello, which Badde also received earlier this year. There will be more to this story.

Ignatius Press has produced a well made and beautifully printed edition of Badde’s book with a number of fine color photos of the Holy Face. This is fitting for Badde’s book is no less than a treasure for the ages, a landmark and compass of Catholic culture for the twenty first century.
Posted by Raymond Frost at 6:14 AM No comments: 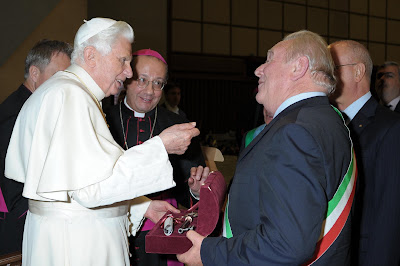 During the Wednesday audience today at the Paul VI Hall at the Vatican Pope Benedict received the key to the commune of Manoppello from the Mayor and the President of the City Council of Manoppello. The Pope said that he was "honored to receive the key to Manoppello" and added that "now I can enter the city of the Holy Face without any obstacles". In reply to the Mayor who asked him when this might be possible, the Pope replied "we'll see". Thanks to Paul Badde for the photo of the happy day which shows Pope Benedict, along with the Mayor and Archbishop Forte, the ordinary of the Archdiocese of Chieti-Vasto of which Manoppello is a part.
Posted by Raymond Frost at 4:03 PM No comments: