Steve Ray, Popular Catholic Author and Pilgrimage Leader Interviewed from the Shrine of the Holy Face of Manoppello 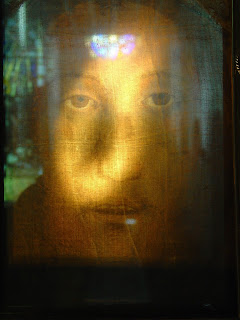 
Steve Ray, one of the best informed Catholic media personalities in the United States on the nature of the Holy Face of Manoppello, was interviewed on the topic on Relevant Radio on June 21. In fact Steve was speaking from right next to the Holy Face in the shrine of the Holy Face by cell phone with Wendy Wiese the guest host of the "Morning Air with Sean Herriott" program.

Steve Ray has led several pilgrimages which have included visits to the Shrine of the Holy Face and has another pilgrimage in October. In this interview Steve speaks with great enthusiasm about Paul Badde's research on the Holy Face related in the book The Face of God published by Ignatius Press and about the inexplicable nature of the holy image and how available it is to pilgrims for prayer and devotion who make the two hour trip from Rome to the little hilltop town of Manoppello. Steve Ray also wrote about his visit to the Shrine in his blog: http://www.catholic-convert.com/blog/2013/06/21/face-of-god-in-manappello-2/

Follow this link to Steve's interview at this link starting at minute 29 ---http://relevantradio.streamguys.us/MA%20Archive/MA20130621c.mp3
Posted by Raymond Frost at 9:13 PM No comments: 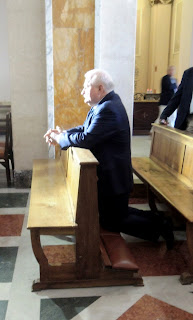 Thank you to Antonio Bini for allowing me to post his timely report along with his photos of this important visit to the Holy Face of Manoppello.

Yesterday, Friday, June 14,the former Polish Prime Minister and Solidarity leader Lech Walesa visited the Shrine of the Holy Face where he was welcomed by the Capuchin friars headed by their provincial Father Carmine Ranieri and also by the Polish nuns of the Holy Blood who recently established themselves in Abruzzo.
Upon arriving at the Shrine the former Polish president, a practicing Catholic, went first to pray before the Holy Face and then attentively listened to the explanations regarding the Holy Face offered to him by Fr. Ceslao Gadacz, a Polish Capuchin friar who belongs to the community of Manoppello. 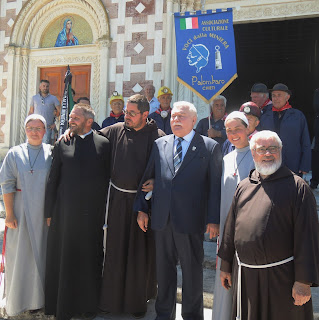 In this photo taken in front of the Shrine – from the left Sr. Pia, Fr. Dariusz Stancryk, Fr. Ceslao Gadacz, Lech Walesa, Sr. Immaculata and Fr. Carmine Cucinelli, Rector of the Shrine of the Holy Face with some of the miners standing behind.

The priest remembers as a young seminarian meeting the Solidarity leader in the Capuchin monastery in Krakow during the troubled year of 1989. Walesa, a recipient of the Nobel Peace Prize, asked Fr. Ceslao several questions about the origins of the Veil and its presence in Manoppello. He also asked the reasons why the Vatican does not recognize the historical authenticity of the Holy Face. In this regard, Father Ceslao outlined the studies leading to the identification of the Face of Manoppello with the Veronica, including the studies which in recent years have been contributed by Polish researchers.

The Solidarity leader wished to know if John Paul II had been to Manoppello. He was told that the Pope had loved and visited Abruzzo and its mountains a number of times -- far beyond his limited official visits and that one could not completely rule out the possibility that the pontiff may have paid an informal visit to the the Shrine, on a weekday, just as any ordinary pilgrim might do. In the past rumors regarding such a visit were heard in various quarters. In fact the Shrine of the Holy Face in the countryside was visited very little until just a few years ago and thus was well suited to visits that could have remained unnoticed, especially on weekdays, such as on a Tuesday,a day which was usually chosen for such excursions outside the Vatican palaces.

After the death of Pope John Paul II his secretary Stanislaw Dziwisz who later became cardinal and archbishop of Krakow, revealed in his book "A Life with Karol" (published in Italy by Rizzoli, 2007) that the Polish Pope had taken refuge in Abruzzo more than a hundred times to pray, to walk in the mountains, and also to ski, using a ski pass just like any other skier. It should also be noted that John Paul II was informed of the thesis put forth by Father Heinrich Pfeiffer, the first scholar to publish his research on the Holy Face which began in 1991.

According to what Saverio Gaeta related in his book "The Enigma of the Face of Jesus," the Polish Pope, physically weakened, in the year 2000 requested from the Canons in charge of St. Peter's Basilica that they bring to his apartment the reputed Veronica which is kept under their care. After having carefully observed it he came to see for himself the lack upon it of any kind of an image, a circumstance which confirmed that, for centuries, the Veronica has not been at the Vatican.

His encyclical letter "Tertio Millennio Ineunte" - at the end of the Great Jubilee of 2000 - can be read as the pressing invitation of the Pope, elderly and ailing, to seek the Face of Christ --tangibly present upon the Veil of Manoppello and the Shroud of Turin -- as his message delivered to the third millennium.

These angles ought to be studied at greater depth following the valuable testimony of the Cardinal Stanislaw Dziwisz.

For Lech Walesa the inevitable recalling to mind of the great figure of the Polish pope appeared to be made even stronger when he discovered to his surprise the presence in Manoppello of other Polish members of religious orders. After hearing the warm greeting of Sr. Immaculata and Sr. Pia, of the order of the Holy Blood, who arrived about two years ago in Manoppello, "Szczesc boze panie Prezydencie" (" May God welcome you Mr. President") he remarked, "Even Sisters from Poland have come here."

He admitted his awareness that the Shrine of the Holy Face in recent years has become very popular among Polish pilgrims, but confessed that the close encounter with the Face was very emotional for him, such that for a few minutes it seemed to him that he had been far removed from the numerous people who accompanied him.

Among those who came to meet him in Manoppello was Father Dariusz Stancryk. Currently in Italy, Father Dariusz at the end of the eighties was a young priest and chaplain of Solidarity in the city of Skarżysko-Kamienna. His memory runs deep of the difficult years in which the Polish Episcopate, with the help of Pope Woityla supported as much as possible the Catholic trade union movement led by Walesa, also assisting those in prison who had been arrested as activists of the union.

Before the visit to the Basilica, the former Solidarity leader wished to honor the memory of the miners who died in the Marcinelle mining disaster in Belgium, which took place on August 8, 1956, and who are buried a few meters away from the Shrine alongside the graves of the departed Capuchins. The victims of Marcinelle were 262 coming from many different European countries. 136 of the victims of the mining disasters were Italian immigrants with Manoppello paying the highest price with 22 deaths, while others came from neighboring towns such as Lettomanoppello, Turrivalignani and San Valentino. In fact San Valentino is the hometown of the family of the current Prime Minister of Belgium, Elio Di Rupo, the son of a miner. A history was revealed of misery and pain, but sometimes also of far more decent and safe working conditions and social redemption for the children of the many "black faces" as the Italian immigrants who worked in the coal mines were derogatorily called.

The tragedy struck other miners who had left their homeland in search of a job, including those emigrating from Poland and other countries. A mining disaster that seemed to repeat the tragedy which had occurred 49 years earlier, December 6, 1907 in Monongah, West Virignia, in the coal mine of the Fairmont Coal Company: the worst coal mining disaster in American history, with the total number of deaths remaining unknown. This tragedy, often labeled as the "American Marcinelle", also caused the deaths of numerous emigrants, mainly Italians, Poles and Hungarians.

Among those who welcomed Lech Walesa in a short, heartfelt ceremony were some former miners and relatives of the victims of Marcinelle, as well as the mayors of Manoppello and other municipalities in the district. During the day, the labor union UGL, on the initiative of Geremia Mancini, presented Walesa with the "Miner's Lamp", the recognition which for many years has been awarded to persons who have devoted themselves to the memory of Marcinelle and to the struggle for work and for the safety of workers. The award recognizes the Polish leader Lech Walesa as an icon of the struggle of labor and trade unionism in defense of the working classes.

In the small ethnographic museum which can be visited in the Sanctuary, next to the room containing the "ex voto" left in recognition of answered prayers, is displayed the helmet belonged to Geremia Iezzi, the last miner to come up from the bowels of the mine on that tragic August 8, 1956, just prior to the explosion in the Bois du Crazier coal mine of Marcinelle.

Before Walesa's departure the rector of the Basilica gave the illustrious guest the Polish edition of Paul Badde's book and a video on the Holy Face. The deeply moved Walesa said farewell after writing in the visitor's book this brief, simple yet strong message "I thank you Lord God for what I experience today." 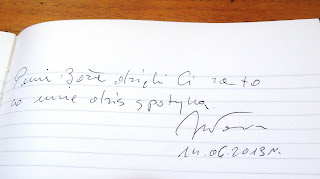 Posted by Raymond Frost at 9:02 PM No comments: 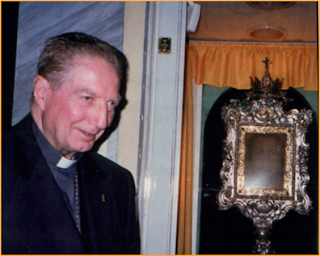 
The religious community of the Shrine of the Holy Face remembered in prayer Cardinal Carlo Maria Martini (born 1927 in Turin, died 2012 in Gallarate) pilgrim to the Holy Face. The cardinal encountered the Holy Face September 8, 2003, and remained profoundly moved by it. He wrote in the visitors book a brief prophetic reflection: Il Volto che contempleremo in eterno! "The Face that we will contemplate in eternity!". The shaky handwriting revealed the initial stage of his illness.

But this phrase did not just remain there, confined to the visitors book, as merely a testimony of his visit and as a simple expression of a momentary emotion, of a temporary suggestion linked to his knowledge of the Holy Face. That encounter, which preceded by three years the first papal visit to Manoppello, remained imprinted in the mind and heart of the Cardinal, who in those years had retired to a life of prayer in Jerusalem. In fact, a year later, in bringing to fruition his book entitled "La trasformazione di Cristo e del cristiano alla luce del Tabor", (The transformation of Christ and of the Christian in the light of Tabor) published by Rizzoli, 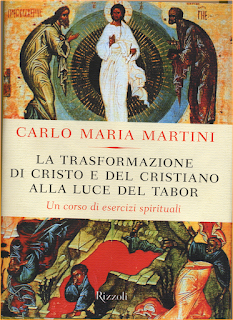 he wanted to remember in the preface his visit to Manoppello, sharing with his readers his emotion, repeating that message left in the visitors book. Prior to the visit of Benedict XVI, Cardinal Martini was among the first cardinals, together with Cardinal Fiorenzo Angelini, to express himself without uncertainty regarding the Holy Face.
Posted by Raymond Frost at 12:36 PM No comments: