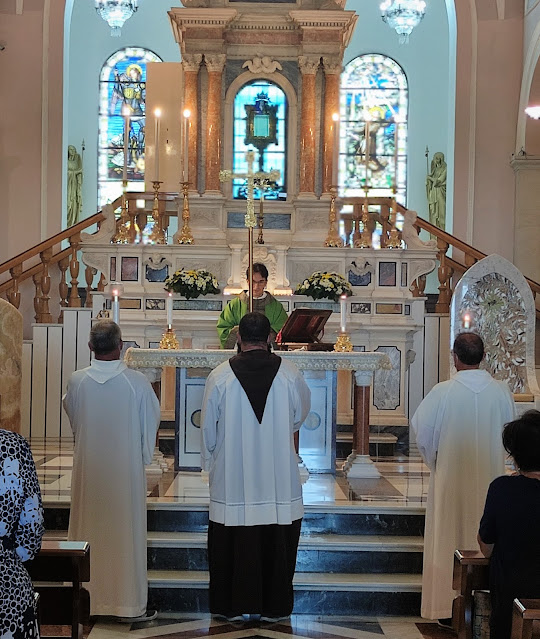 Some considerations on the process of his beatification and canonization

On Sunday, September 19, Padre Domenico da Cese was remembered at the Basilica of the Holy Face, to mark the occasion of the 43rd anniversary of his death, which took place on September 17, 1978, in Turin, where he had gone for the exposition of the Holy Shroud. The solemn celebration was presided over by Fr. Matteo Siro, minister of the Abruzzo, Lazio and Umbria province of the Capuchin fruars.

The improvement of the pandemic situation in Italy has allowed many devotees and spiritual children of Fr. Domenico to travel to Manoppello from various parts of the country including quite a few members of the Holy Face Association of Ruvo di Puglia and Andria, whose establishment was nurtured by Padre Domenico. Also present were his nieces and nephews. 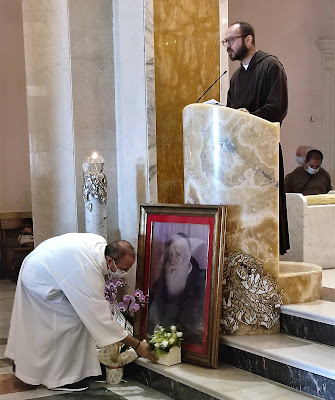 Before the celebration of the Holy Mass, Fr. Antonio Gentili, rector of the shrine, read the lengthy testimony of a married couple, Antonio and Rosario Oligno of Lucera (Foggia), published by Fr. Eugenio Di Giamberardino, the vice postulator for the cause of canonization of Padre Domenico, in  the newsletter of the "Friends of Padre Domenico", in which some extraordinary events attributed to Fr. Domenico (see the first page below), were sent to Br. Vincenzo D'Elpidio on August 8, 2009. 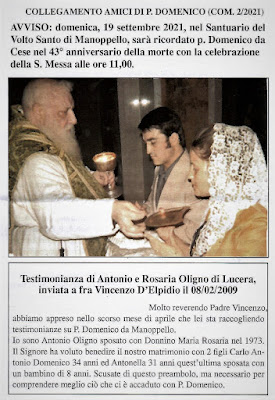 A very large framed photo of Padre. Domenico da Cese was placed at the foot of the altar, in front of the pulpit.  Br. Vincenzo d'Elpidio donated the photo to the Shrine in February 2019, having received it from the daughter of Nicola Iacoboni, a devotee from Rome who had passed away the year before. 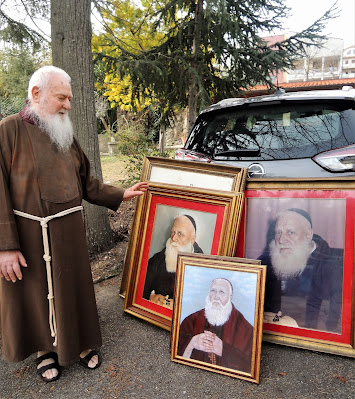 Fr. Matteo Siro, during the homily, recalled Padre Domenico’s special bond with the Holy Face which he never tired of venerating and having venerated. Fr. Matteo also expressed the hope that the path for the beatification and canonization of Padre Dominic might continue its course. A clear position, which expresses, once again, the will of the entire Capuchin province to support the cause of their venerable confrere. 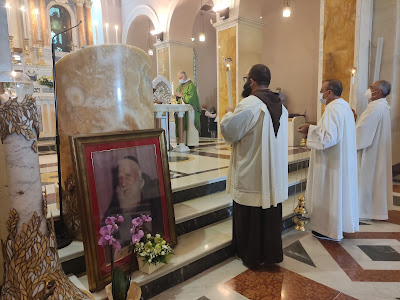 Many devotees and spiritual children of Fr. Domenico, especially those from distant places, have asked me too about the process of beatification and the transfer of the mortal remains of the friar from the private chapel of the cemetery of Cese, a small town near Avezzano, to the Basilica of the Holy Face.  This transfer had been requested by the then provincial father of the Capuchins Fr. Nicola Galasso, after having obtained the consent of the friar's nieces and nephews.  This desire was not acted upon. despite an initial favorable judgment.

I take this opportunity to recall the most significant phases of the process.

After the nihil obstat  (nothing stands in the way) issued on March 3, 2015 by the Congregation for the Causes of Saints, the effort of collecting and documenting testimonies of the life of Padre. Domenico has continued, including by people who did not know him during his life. The work of collecting and archiving carried out by Sister Petra-Maria Steiner is impressive. Padre Domenico’s relationship with the Holy Face and with Padre Pio continues to be written about.  A recent article in the Catholic periodical French  Famille Cretienne

relaunches the hypotheses put forward in recent years by the late Australian journalist Paul MacLeod, a scholar of Padre Pio, regarding the saint’s bilocation in front of the Holy Face, which preceded Padre Domenico’s own bilocation in San Giovanni Rotondo.

Almost seven years have passed and everything seems to have come to a stand still. To date, the diocesan tribunal for the cause of beatification and canonization of Fr. Domenico has not yet been established, an act that falls within the competence of the archbishop of the Diocese of Chieti-Vasto Mgr. Bruno Forte, who also in 2013 had begun the process, with a documented request directed to the Congregation for the Causes of Saints following on the proposal of the Capuchin Order and after having had the consent of the Episcopal Conference for Abruzzo and Molise (September 30, 2013). With a subsequent act of October 2, 2013, the archbishop publicly formalized his desire, declaring that he had come "to the determination to "promote the cause of beatification and canonization of the Servant of God Fr. Domenico da Cese", inviting the faithful to collect memories, documents and writings.

Unfortunately, the older devotees of the friar-apostle of the Holy Face are little by little leaving this earth, such as the aforementioned Nicola Iacoboni and the unforgettable Br. Vincenzo D'Elpidio, himself an extraordinary example of faith and charity, who for many years carried out his own personal and generous mission to groups and individuals united by their devotion to Padre Domenico.

These are complex paths, not always understandable for lay people, with ample room for judicious discretion as well as for an unforeseeable  outcome.

Comforting then the thought of Pope Francis who affirmed that "The Church without witness is only smoke" (2018), considering how the whole life of Padre Domenico was always a living witness of faith. 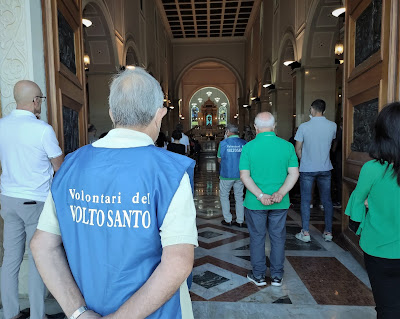 Posted by Raymond Frost at 11:20 AM No comments: