The Pifferari of Abruzzo and their Christmas Traditions


They were called "pifferari": the bagpipers of Abruzzo and their centuries old traditions of Christmas 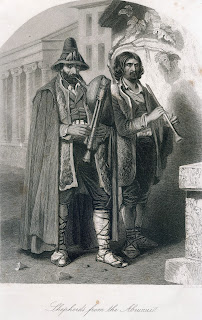 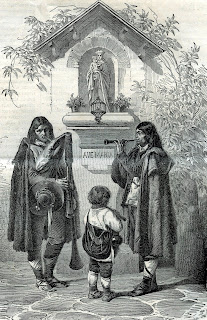 Anonymous Woodcut from the Second Half of the 19th Century published in the journal Roma, 1874 -- Pifferari play before an outdoor shrine of the Madonna


On display as part of the current exhibition "The sound of bagpipes in the soul : d'Annunzio and the ancient sonority of the pastoral world" is the bagpipe which is part of the collection of objects in the small ethnographic museum connected to the Shrine of the Holy Face of Manoppello. 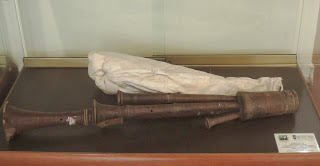 The exhibition, which will run from November 23 to January 26, 2014, is being held at the Museum of the Birthplace of Gabriele D' Annunzio in Pescara.

The bagpipe lent to the exhibition in Pescara was donated to the Shrine years ago by an anonymous elderly bagpiper, probably during his last Christmas traveling to the traditional novena. According to testimonies collected in the past, the pipers who came to the shrine during Christmas were given lodging for the night by the Capuchin friars. 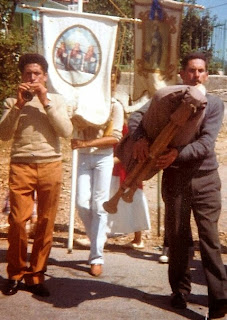 Mario and Enrico Musichini, at the head of a company of pilgrims who are returning to their town of Castellafiume, in Abruzzo.

Until the nineteen sixties, a living nativity scene was held on January 6.

But the bagpipe was linked at one time not only to Christmas but also to the religious rites , and were present in the companies of pilgrims moving on foot towards the shrines.

The bagpipe is an ancient tradition in southern Italy and in particular in the Abruzzo region , where for centuries it has been linked to the pastoral world. The pipers, or better pifferari as they were called by the travelers of the Grand Tour, normally played the ancient instrument during the hours of watch over their flock, according to testimonies collected in Abruzzo also from American travelers , such as John Augustus C. Hare who met them near Sulmona (see Days near Rome , 1875) and Maud Howe who in 1898 records their presence in Roccaraso (see Roma Beata ).

But it was above all in Rome where the arrival of the pifferari for the Christmas novena took a particular religious relevance in the wake of an ancient tradition that was repeated until 1870, that is with the acquisition of the Papal States by the Kingdom of Italy. "The pipers never hurt anyone" protested the Romans.

To lament the loss of this tradition was also the American sculptor William Wetmore Story, in his book "Roba di Roma " in his later edition of 1870 (the first edition was published in 1862 in Boston and New York) .
There were reasons of public policy, related to the danger posed by banditry , to prevent the pipers' access to Rome. In Abruzzo this long tradition was to suffer the consequences of the collapse of the pastoral economy , which led many to emigrate from Abruzzo to the United States . Not surprisingly, the bagpipes which belonged to an immigrant from Abruzzo are on display in the Carnegie Museum of Art in Pittsburgh.

Stendhal, Dickens , Goethe, Berlioz, Lear , Gregorovius and many other known and less well-known protagonists of the Grand Tour in Italy frequently turned their attention to the pipers of Abruzzo, who with their repertoire in the past centuries inspired many musicians and composers ( Handel, Berlioz, Gounod , Corelli , etc. . ), whose pastoral compositions were largely influenced by the sonority of these singular wandering musicians .

St. Alphonsus Maria Liguori himself, author of the famous Christmas carol "Tu scendi dalle stelle" (known in English with various translations : "You come down from the stars" or "From Starry Skies Thou comest " , "From Starry Skies Descending ," " You Came a Star from Heaven ") adapted the music using pre-existing melodies played by shepherds from Abruzzo, as supported by several musicologists , including the Redemptorist Fr. Paolo Saturno , Professor of History at the Conservatory of Music of Salerno. Nevertheless it is certain that the text is by St. Alphonsus and that it was born as a prayer and was included in his "Christmas Novena".

It was definitely during his mission in Deliceto (1744-1746) , on the Mountains of Dauni in Puglia,
that the saintly Neapolitan musician came in close contact with the shepherds on the lowlands of Puglia . The spiritual care of the shepherds was in fact the goal of reopening the ancient shrine of Our Lady of Consolation near Deliceto . The first biographer of St. Alphonsus , his disciple Father Antonio Tannoja , wrote that St. Alphonsus "wept when he came to learn of the conditions of life of the shepherds , whom he wanted to assist at least on a spiritual level." 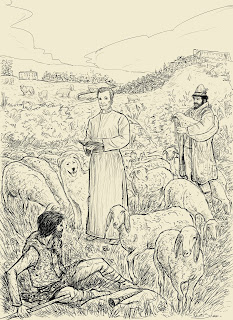 The pipers disappeared in silence at the beginning of the sixties, not only due to the inexorable decline of pastoral life , but also because of the steamroller of modernity and cultural assimilation.

In Italy it was especially Gabriele d'Annunzio , who had within him the reverence for the memories of his native land , viscerally attracted to the ancestral scenarios in the region, returning frequently with his soul to the ancient pastoral civilization, which he extolled in several works.

In recent years there has been a renewed interest in the recovery of the centuries-old tradition of pifferari by the Associazione Zampogne d'Abruzzo - http://www.zampognedabruzzo.it - whose members include a number of young people with musical training at the conservatory level.

Following the very successful exhibit on the Holy Face which took place last August at the Meeting in Rimini there will be a similar exhibit entitled "The Face of Jesus: from that Gaze, the Human Person". This exhibit, organized by the same team which was responsible for the Rimini exhibit, will be held in New York City next month at the Manhattan Center as part of the annual cultural meeting "New York Encounter". See the website http://www.newyorkencounter.org/exhibits/2014/1/17/the-face-of-jesus-from-that-gaze-the-human-person for information on the meeting and exhibit, including the introduction to the exhibit on the Holy Face by Cardinal Sean O'Malley of Boston who will be in attendance at the gathering. This event in the cultural capital of America promises to be of immense importance for the spread of the knowledge of the Holy Face. An english translation of the catalog of the exhibit at Rimini has been prepared in time for the event in New York City.
Posted by Raymond Frost at 6:37 PM No comments: