Pray the Rosary with Pilgrims at St. Peter's Basilica in Rome Every Day.

Home  click on the link to the left for "A Moment with Mary: The Holy Rosary Said Live from St. Peter's Square Rome". This is a beautiful opportunity in the Year of Faith to unite with people throughout the world centering on the place of unity in the faith, in union with Mary, praying the Rosary live with them for so many intentions needed.  The Rosary is prayed at 4pm each day, Monday through Friday, Rome time, which at this time of the year is 7am on the West Coast and 10am on the East Coast.  Or there is an archive of past rosaries which can be accessed.
Posted by Raymond Frost at 7:38 AM No comments:

Dozens of times in the Psalms the psalmist cries out, "Let me see your face, O Lord." - Throughout the liturgy of the Church, in the Holy Sacrifice of the Mass and in the Liturgy of the Hours this cry resounds. Jesus Himself showed His face to the people who lived in Palestine in the first century when He walked the earth, as an answer to the Psalmist. He desired to leave an image of His face on the burial facecloth as a mark of the resurrection left behind in the tomb (John 20:8) when He returned to heaven so that the people of God would have in very truth the ability to see His face. 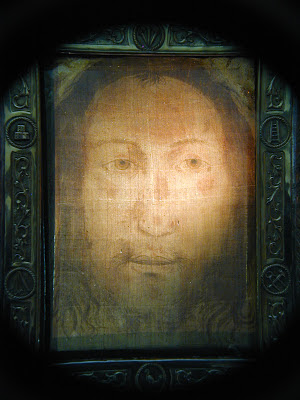 The production of icons throughout the ages, copies of the Holy Face, have made it possible for all to see the Face of Jesus, the Face of God. Great works of art in the Renaissance period were devoted to the Face of Jesus. In Rome for centuries the original Holy Face from the facecloth left in the tomb (the Veronica) was displayed for thousands and thousands to see. When the Veronica was transferred to Manoppello in a mysterious way the desire of the Christian people to see the Face of God continued as strong as ever, even though the original Holy Face was no longer in view as before. The Stations of the Cross and the devotion to the Holy Face continued to remain strong in the people of God.