The Veronica is not in St. Peter's 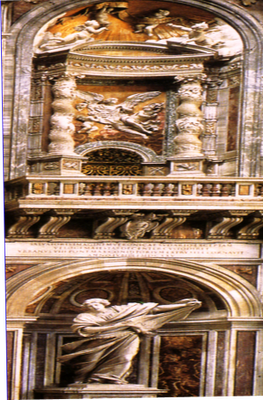 After almost five centuries the Vatican admits its disappearance in 1527. A circumstance which makes credible the hypothesis that it is identical to the Holy Face

On May 31, 1999 at a crowded press conference held in Rome at the foreign press association Fr. Heinrich Pfeiffer revealed the results of his study affirming that the Veronica and the Holy Face of Manoppello should be seen as one and the same. This news was reported by Italian and foreign television networks among their top stories for the day. Usually the coverage was linked to the classic stereotype of the mountainous Abruzzo region, so that Manoppello was described as a "forgotten village at the foot of the Maiella range".

Some of the journalists asked the Vatican for an opinion in this matter. The response was "total silence", said the correspondent for the Spanish television network Antenna 3's news program of May 31, 1999, as he broadcast with the facade of the Basilica of St. Peter's behind him.

The Catholic press and church leaders showed indifference and kept their distance, effectively isolating Father Pfeiffer, director of the Course on Cultural Patrimony for the Gregorian University, who is considered to be among the world's most authoritative scholars of Christian art. Some Italian scholars of the Shroud of Turin (sindonologists) didn't hesitate to show their annoyance at the news, and in some cases gave their opinion that at best the Holy Face could only be a copy of the Veronica. 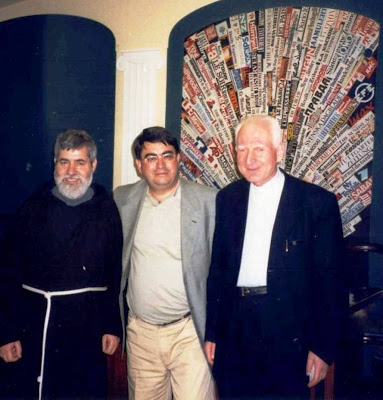 On the same occasion the results of Professor Donato Vittore's research were also presented. Professor Vittore, who teaches at the University of Bari, demonstrated by means of a high intensity scanner that there was no pigment on the cloth.

The problem was not so much the Holy Face itself, which had been at the center of a beloved and popular yet strictly local devotion centered in the mountains of Abruzzo, but rather the bringing up for discussion that the legendary Veronica was no longer to be found in Rome at St. Peter's Basilica.

Throughout the centuries the Veronica has been Christianity's most important relic. Coming from the East, it was venerated at St. Peter's from the eighth century, until it became the fundamental reason for pilgrimages to Rome, even prior to the first jubilee year proclaimed by Pope Boniface VIII in 1300.

Among the pilgrims coming to Rome to venerate it were Dante and Boccaccio.

After the 1500's a great silence fell over this prodigious image. But as the great Jubilee for the Holy Year of 2000 approached two important exhibitions were organized at Rome with the collaboration of the Vatican's Apostolic Library. Both exhibitions, the first on the history of the Pilgrimage to Rome in the Middle Ages (at the Palazzo Venezia) and the second on "The Face of Christ" (at the Palazzo delle Esposizioni) recalled to mind the historic role of the Veronica by means of documents, medals, etc. from a number of foreign museums. From the two exhibitions there emerged the clear distinction between the reproductions and engravings of the Veronica prior to the 1500's, which showed the image with eyes open, and the reproductions following which showed the image with eyes closed. In any case since the 1500's there continued to be a persistent silence regarding whether or not the relic was present at St.Peter's.

The arrival of the Jubilee Year of 2000 was marked also by an extraordinary production of books and articles which involved historians, experts on the Middle Ages, theologians, art historians, etc. At the end of 1999 one of the many books of a historical perspective published a photo of the cover of the "Opusculum del Grimaldi" preserved in the Vatican archives and which up until then had been unknown.

This document, dated 1618 (but which seems from every indication to have been changed from the original date)presents the image of the Veronica with open eyes and represents an important contribution compared to the overall confusion on the matter.

The importance of this image was at the center of my article entitled " La Veronica com'era" (The Veronica as it was) which I wrote for the pages of the Bollettino del Volto Santo (Bulletin of the Holy Face -- official publication of the Shrine of the Holy Face of Manoppello). There followed a further reflection on this by Padre Germano Di Pietro, then superior of the Shrine, which had the title "E' ancora in San Pietro la Veronica" (Is the Veronica still in St. Peter's?)

After the publication of these articles two Canons of St. Peter's came to Manoppello to advise Padre Germano to stop bringing up this issue.

When Pope Benedict XVI decided to go on pilgrimage to Manoppello his visit was announced and then denied for months. Contrary to the long advance notice which precedes the Pope's public appointments it was confirmed by the Vatican press office only around ten days before September 1, 2006. We know that the visit was strongly opposed by the Canons of St. Peter's, precisely for the significance that would be given to the event, with its implicit recognition of the thesis which had been advanced by Father Pfeiffer after years of research that the Holy Face is to be identified with the Veronica.

The visit was then described as a simple "private pilgrimage", a label which brought a smile to Pope Ratzinger himself at Manoppello.

In the meantime other scholars, especially from foreign countries, began to draw closer to the Holy Face. Paul Badde's book published in Germany in 2006 caused the weekly Der Spiegel to describe it as "a cultural thriller, full of suspense and intrigue, similar to Dan Brown"

Among the Italians the importance of Saverio Gaeta's study "L'enigma del Volto di Gesu'" (The Enigma of the Face of Jesus) published by Rizzoli in 2010 must be emphasized. Gaeta in his book, among other things, puts forth an interesting hypothesis concerning several important people linked to Abruzzo who were involved in the Sack of Rome in 1527.

His hypothesis is compatible with the arrival in Manoppello of the Holy Face, which according to the first document attesting to the presence of the relic in Abruzzo - the Relatione Historica (Historical Report) of Padre Donato da Bomba, came to the Abruzzi town "around the year 1506". The imprecise phrasing used by the Capuchin suggests using due caution, considering that the report wasn't published until 1640.

Bruno Forte, Archbishop of the diocese of Chieti-Vasto, in whose territory Manoppello falls, on many occasions has shown that he trusts the reliability of the studies which have so far been conducted concerning the Holy Face.

Pilgrims who arrive in Manoppello from the world over are not so much interested in this research, wanting above all to pray and to meditate before this mysterious image with its profound and human gaze which no work of art is able to render.

In April of 2011 an exhibit on the Holy Face opened in Lucca and another exhibit was held in September of the same year at Lourdes which was seen by over 150,000 people. The exhibit of Lourdes was strongly desired by Philippe Perrier, Bishop of the diocese of Lourdes-Tarbes who is very much devoted to the Holy Face.

But the year just completed is particularly significant because after almost five centuries the silence regarding the disappearance of the Veronica from St. Peter's came to an end. On December 6, 2011, with Christmas close at hand, L'Osservatore Romano welcomed an article by Paul Badde who on a number of occasions, in articles and in his book which so far has been translated into seven languages, had criticized the Vatican for their reticence. Badde was able to write for the first time in the press organ of the Holy See that the Veronica is for centuries in Manoppello, in as much as it disappeared during the so called Sack of Rome.

The last segment of the exhibition, inaugurated in August in San Marino, was dedicated to the "Holy Face". The surprise comes from the part of the press release where it affirms that the ancient relic of the Veronica "disappeared following the Sack of Rome of 1527".

In this brief phrase, there are two points to be gathered which are quite extraordinary.

This press release, ascribable to Professor Paolucci head of the Vatican Museums, is the first document which refers, even if only incidentally to the necessary information connected to the announcement of the exhibit, that the Veronica is no longer present in St. Peter's. It confirms an important series of hypothesis and doubts advanced by historians and other scholars, especially in recent years. But the press release offers a further element by indicating with precision that the disappearance of the Veil coincided with the Sack of Rome of 1527.

Professor Paolucci, with his authoritative stature as a former Minister for Cultural Patrimony in the Italian government, has finally been able to shed light on the doubts and uncertainty which have dragged on for far too long.

Regarding the Holy Face there will continue to be much discussion, but certainly it will no longer be able to exclude, a priori, the hypothesis that it is in fact the Veronica.
Posted by Raymond Frost at 7:37 AM 1 comment: