Knowing and Celebrating the Face of the Lord

I am happy to share a very fine article written by the Australian journalist Paul MacLeod reviewing Paul Badde's recently published book "The True Icon". I do so in honor of the upcoming feast this Sunday of the Holy Face celebrated in Manoppello with a joyful, prayerful procession from the Shrine of the Holy Face to the church of San Nicola inside the walls of the historic fortified town. The Holy Face will then remain overnight in 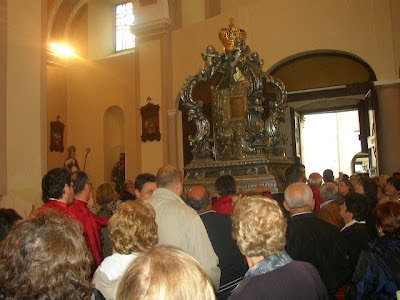 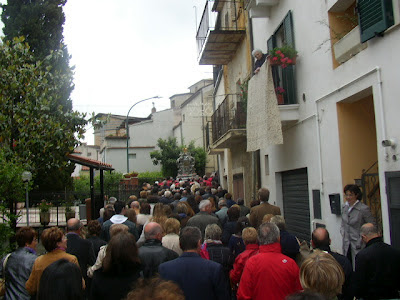 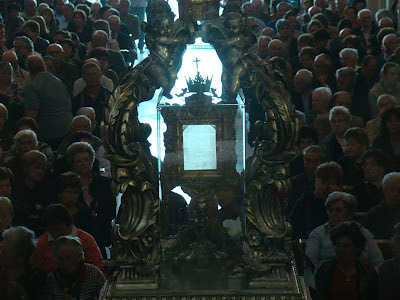 San Nicola before being taken on Monday morning in procession through all the streets of the town and back to the Shrine.

(the first two photos above are by the editor of the blog, the third photo above, and the one below are by Paul Badde)


Two witnesses – and a tiny lock of hair
By Paul MacLeod 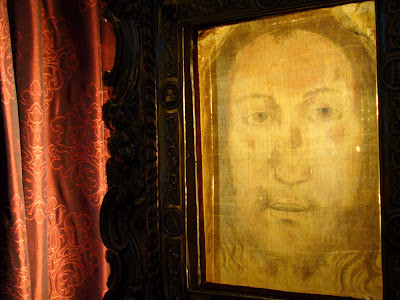 A tiny lock of hair is a vital piece of evidence in an investigation of the circumstances of the Resurrection, validating one of the “signs” Pope Benedict XVI spoke of in his address to the world on Easter Sunday.
The Pope quoted the ancient Easter hymn, Victimae Paschali Laudes, which addresses to Mary Magdalen the question: “What did you see?” It has her reply: “the angelic witnesses, the sudarium and the gravecloths.”
These the Pope described as “signs”.


Research by the German historian and journalist Paul Badde in recent years has established the identity of the sudarium and the gravecloths, which still exist, and are indeed signs, just as a sacrament is a physical sign of a spiritual truth.
The German theologian, Klaus Berger, a friend of the Pope, has said of Badde: “Nobody has ever dared to go deeper into the Holy Sepulchre than Paul Badde.”


The term “sudarium” has long been taken to refer to the Shroud of Turin, but it is only one of the “gravecloths” (othonia in Greek, which means “wrappings”). Another is the bloodied cloth preserved at Oviedo, in Spain, and another a headband, kept in Cahors, in southern France.


Badde has now established that the “sudarium” is, in fact, what is known as the Veil of Manoppello, which has an image of Jesus’ face, alive and with His eyes wide open.
The Shroud and the Veil present us with two witnesses to the reality of the Resurrection, the two witnesses required by Jewish law. One shows us Christ dead and the other Christ alive.
The Shroud, of course, bears an image of the whole body of Jesus, bloodied and wounded, majestic in death – a large four-metre long linen sheet, but dim in its outlines and detail. The Veil, on the other hand, is a delicate, transparent piece of expensive material, measuring just 28cm by 17cm, in which the face of Jesus seems to float in light, even to store light

The Shroud came to world attention at the end of the 19th century, when the Italian photographer, Secondo Pia, famously produced a positive image, greatly clarifying the detail and leading to years of study, tests and speculation.


Now the Veil has come to world attention – almost as though these physical signs have been reserved for an unbelieving age.


Badde describes them as “the first pages of the Gospel”, written during the very night of the Resurrection, not by man’s hands though, and written in images rather than words – and what could be more appropriate for our digital age in which we increasingly communicate by images?


None of the written gospels attempt any description of what Jesus looked like. They did not need to, as the Church treasured these cloths from the tomb.
They were found there by Peter and John on the morning of the Resurrection, and, as John relates, one was rolled up by itself, away from the others. This was undoubtedly the Veil, which was a piece of most expensive material, known as byssos, woven from the fibres of sea mussels, and used as a face covering in death for dignitaries such as the High Priest.


In the darkness of the tomb, the image on the Shroud would not have been evident, but if Peter held the Veil up to the earliest light of the day from the entrance, his shock would have been much greater than that of Secondo Pia.


Peter obviously took the cloths back to the city with him, and as articles that had touched a corpse, they were ritually unclean in Jewish law, and would have brought down the wrath of the Jewish authorities on the new community. Hence, Badde suggests, the Apostles kept the doors locked to preserve these treasures. Had they been shown and displayed or discovered in those early days, neither these items would have survived, nor the community of the first followers of Christ around Mary and the Apostles.


As the Church spread, they found their way first to Edessa, then to Constantinople and, during the Crusades, to Europe, and were referred to by a variety of names. But both images are of the same person. Computer technology has now shown that the features of Christ on both are an exact match.


What is of great significance is that the Veil was first publicly displayed in Rome in 1208, and up to that time, icons and paintings of Christ bear a close resemblance to the features on the Veil – even to a tiny lock of hair on the forehead. Why would an artist put that there if he was not copying the Veil?


The Veil, known then as “the Veronica”, was later housed in a pillar of the rebuilt St Peter’s Basilica, but disappeared during the Sack of Rome in 1506, although the broken frame which had held it is still in the treasury of St Peter’s.


This cloth turned up in 1508 in the little town of Manoppello, in the Italian province of Abruzzo, and is now housed in a reliquary above the altar of the Capuchin monastery there, visible to all who visit. The shrine is known as the Volto Santo, or Holy Face.


Meanwhile the Shroud turned up in France and was first publicly displayed in Lirey in 1356. From then on it gained increasing attention, while the Veil faded into obscurity. That is, until 1977 when the Capuchin custodian of the Manoppello shrine, Fr Domenico da Cese, took a large photograph of it to a Eucharistic Congress in nearby Pescara, and the world began to take notice. He died in an accident the next year in Turin, which he had visited to see the Shroud for the first time - and there are now moves for his beatification.

In 1968, Fr Domenico opened the doors of the shrine one morning to find Padre Pio kneeling in prayer before the image – as the very last example of Padre Pio’s power of bilocation. At the time, Padre Pio was gravely ill in his cell in the Capuchin friary at San Giovanni Rotondo, more than 200 kilometres away, and was to die that night.


Pope Benedict XVI visited the Manoppello shrine in 2006 as one of the first acts of his pontificate, and has since increasingly referred to the face of Jesus as the human face of God, culminating in his Urbi et Orbi address this last Easter Sunday.


The new second Eucharistic Prayer of the Mass now asks God to welcome the departed “into the light of Your face”, rather than “presence”, as in the old version, and it has been suggested that the altar cloth and chalice veil at Mass have their origins in the Shroud and the Veil.
In Psalm 24 we read: “Such is the generation of those who seek Him, seek the face of the God of Jacob”. This is the deepest longing of the human heart – to see the face of Him in whose image we are made.

Paul Badde tells the story of his investigation into the link between the Shroud and the Veil in his book “The True Icon”, published by Ignatius Press.

Posted by Raymond Frost at 6:29 AM No comments:

Video of Holy Face of Manoppello 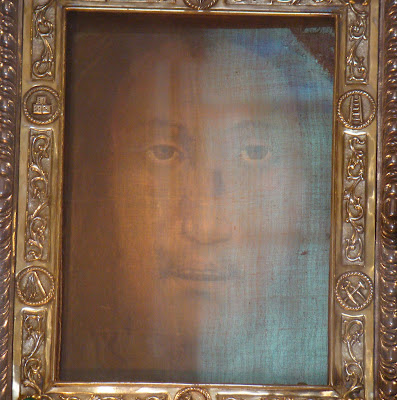 Below is the link to the video