I Was in Prison and You Came to Me 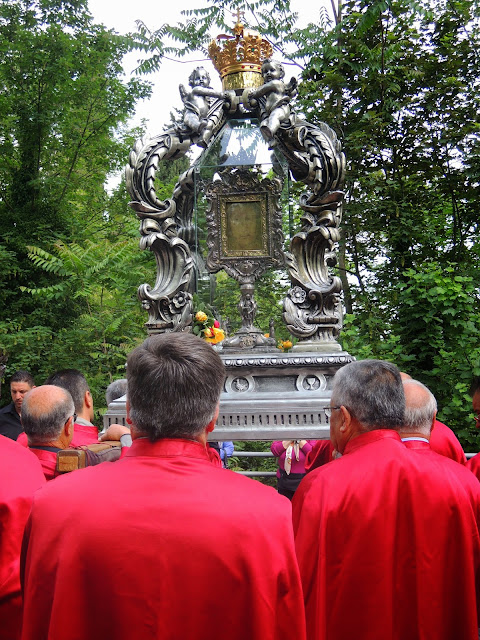 all photos by Antonio Bini except as noted

Once again the annual feast of the Holy Face was celebrated on the third Sunday in May -- this year by a huge crowd -- much larger than those of recent years. The mass of people could follow only part of the route of the procession after having reached the entrance of the town which is known for its narrow winding streets. The organizing committee did its best to prepare for the procession and related events.  Participating in the procession was Fr. Heinrich Pfeiffer who was greeted affectionately by Fr. Carmine Cucinelli, rector of the Basilica, and by Mayor Gennaro Matarazzo. 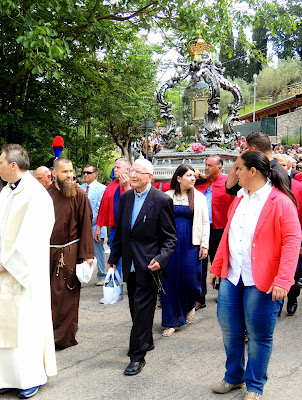 It must be noted that the Jesuit, who is the main person responsible for the  important historical  research done on the Holy Face since the nineteen eighties, is still recovering from four strokes suffered last summer in Mexico during the summer courses which for some years he has taught at universities  in Mexico City and Puebla. Despite his precarious health conditions he still did not want to miss the feast of the Holy Face and concelebrated, together with Don Nicolino, the Mass that was subsequently held in the church of San Nicola after the arrival of the Holy Face. 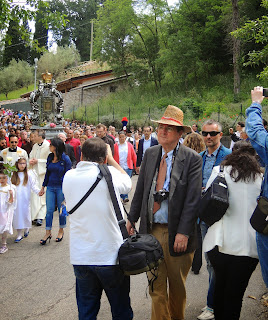 Paul Badde was there too, with his ever-present camera, having just completed his latest publishing effort -- the production of an inexpensive booklet in multiple languages ​​on the faces of the Shroud of Turin and the Holy Face of Manoppello, seizing upon the current interest linked to the  Exposition of the Shroud.  Also participating in the procession was Raffaella Zardoni, whose exhibition Il Volto Ritrovato (the Rediscovered Face) is on display these days in the province of Verona.  A number of German pilgrims were present. The head of the procession was left as usual to the company of pilgrims from Vacri (province of Chieti), followed by the company from Santa Giusta, nearby to Lanciano, in the wake of centuries-old traditions of devotion to the Holy Face. 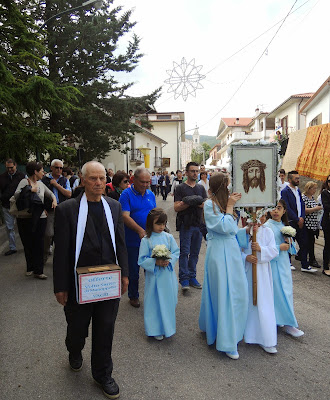 Twenty children dressed as angels went before the members of religious orders and the Holy Face.

The band from Bracigliano (Salerno) alternated with the choir of the Basilica of the Holy Face, conducted by Nicholas Costantini, with breaks for the recitation of prayers. Before arrival in the town the Holy Face was greeted by the shooting off of cannons and fireworks.


Many people, once they had been to the church of San Nicola, also visited the exhibit prepared by Sr. Blandina, located in nearby Piazza Marcinelle. 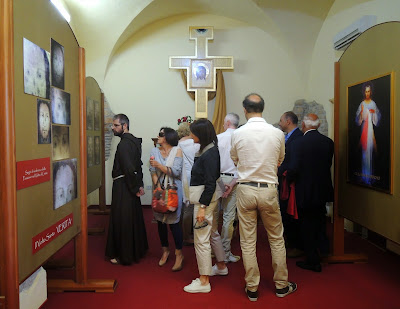 The overnight prayer vigil was led by the  Sisters of the Most Holy Blood until the morning procession for the return of the Holy Face to the Basilica. 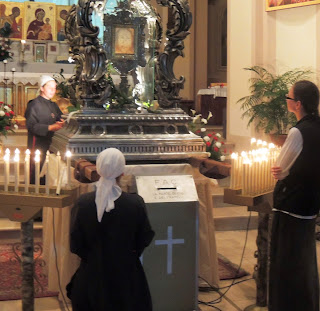 Among the most interesting initiatives related to these May celebrations  I have to point out the first edition of the Cammino of the Holy Face, which began in Rome on May 6 starting at St. Peter's Basilica.  The Cammino is meant to recall the journey of the Veronica to Manoppello. The initiative, promoted by the young councilman Emanuele De Luca, and supported by the archbishop of the diocese of Chieti-Vasto, Bruno Forte, took place on foot over a period of 10 days, with various stages, following the ancient route of Tiburtina- Valeria, along pathways and roads. 15 travelers left Rome and were joined by others on the way, including some on horseback, arriving in Manoppello on the afternoon of  May 16. All bore the neckerchief of the Cammino. Upon arrival, the group was welcomed at the Basilica by Fr. Carmine who blessed the participants, noting how in the past it was foot travel which characterized  pilgrimages to the Holy Face. 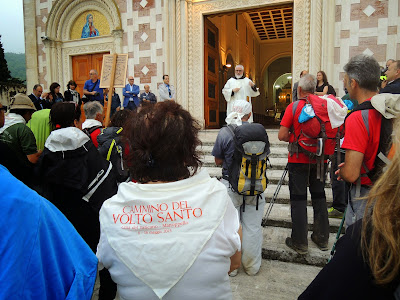 Pope Francis' Prayer for the Holy Year of Mercy 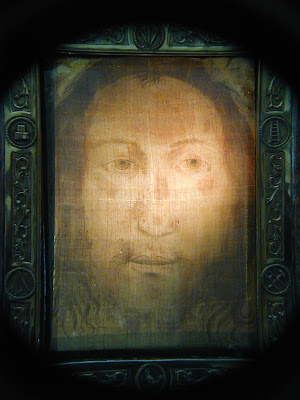 from the website for the Holy Year of Mercy
http://www.iubilaeummisericordiae.va/content/gdm/en/preghiera.html

Lord Jesus Christ,
you have taught us to be merciful like the heavenly Father,
and have told us that whoever sees you sees Him.
Show us your face and we will be saved.

Your loving gaze freed Zacchaeus and Matthew from being enslaved by money;
the adulteress and Magdalene from seeking happiness only in created things;
made Peter weep after his betrayal,
and assured Paradise to the repentant thief.
Let us hear, as if addressed to each one of us, the words that you spoke to the Samaritan woman:
“If you knew the gift of God!”
You are the visible face of the invisible Father,
of the God who manifests his power above all by forgiveness and mercy:
let the Church be your visible face in the world, its Lord risen and glorified.
You willed that your ministers would also be clothed in weakness
in order that they may feel compassion for those in ignorance and error:
let everyone who approaches them feel sought after, loved, and forgiven by God.
Send your Spirit and consecrate every one of us with its anointing,
so that the Jubilee of Mercy may be a year of grace from the Lord,
and your Church, with renewed enthusiasm, may bring good news to the poor,
proclaim liberty to captives and the oppressed,
and restore sight to the blind.
We ask this through the intercession of Mary, Mother of Mercy,
you who live and reign with the Father and the Holy Spirit for ever and ever.
Amen.

Posted by Raymond Frost at 10:01 AM No comments: