On June 29, the feast of St. Peter and Paul, the Minister General of the Capuchin Friars, Fr. Mauro Johri, O.F.M., Cap., and the Superior General of the Marianhill Missionaries, Fr. Damian Weber, C.M.M., paid a visit to the Basilica of the Holy Face of Manoppello.

Paul Badde gave an explanation of the Holy Face with details about the life of the Servant of God Domenico da Cese, Apostle of the Holy Face.  Fr. Johri expressed his thanks to all those, far and near, who collaborate with the Capuchins of the shrine in spreading devotion to the Holy Face around the world, and also expressed his conviction that the shrine would be one of the principal destinations for the upcoming Holy Year of Mercy.

Shroud Effect on the Holy Face

(all photos by Antonio Bini except as noted)

A few days after the conclusion of the period of display of the Shroud (24 June 2015) it is possible to make some assessment on the positive effects that it has had for the Holy Face of Manoppello.

The German magazine Der Pilger (The Pilgrim)  predicted in its December 2014 issue "there will be many pilgrims before or after a visit to the Shroud who will travel to Manoppello, seven hundred kilometers further south." Also according to the Catholic magazine, "if literature on the Holy Face is not as extensive as that on the Shroud, it is likely that the small cloth of Manoppello, which is no less mysterious, has been revered for much longer than its counterpart in Turin ".An obvious allusion to the Veronica.

Many people did take the opportunity to visit the Shroud (19 April to 24 June 2015) together with the Holy Face.  Certainly visits to Manoppello did not record the great numbers seen in Turin, where it is estimated the total flow to be a million and a half people, but the phenomenon of increased visits to the shrine in Manoppello, already perceived during the previous exposition of 2010,  occurred in even larger numbers in 2015, especially in regards to pilgrims from abroad.

An effect probably unexpected by the Piedmontese organizers of the Exposition, who made use of large public and private contributions - something impossible for the Holy Face - for promotional advertising, publishing initiatives, conferences, etc.
.
One such meeting was held in Vienna on  March 17 and 18, with the title "Spuren vom Heiligen Antlitz: Sindon, Sudarium, Mandylion, Veronica, the Holy Face" (Traces of the Holy Face:  Shroud, Sudarium, Mandylion, Veronica, Volto Santo) whose purpose seems to have been to make even more uncertain and confused the historical context referring to the images of Christ, even resorting to mocking and polemical assertions regarding the Volto Santo (Holy Face of Manoppello). I refer, in particular,to  the controversy between the Prof. Karlheinz Dietz and the writer Paul Badde which ended up on the pages of the German newspaper Die Tagespost. So much hostility towards Badde seems to stem from the success of his books, rather than  from a documented thesis by scholars who have never even seen the Holy Face of Manoppello.

Even in many publications produced in Italy during the exposition and largely supported by the organizers there has even been found the deletion of references to the Holy Face of Manoppello, even where they were present in the same issue at the previous exposition of 2010. Singular the fact that many of these articles, pamphlets or magazine supplements referred back to the Shroud any known image of Christ, from Veronica to the Mandylion of Edessa, which some also identified  as the Shroud.

And yet respect and veneration is nurtured towards the Shroud by scholars who are interested in the Holy Face of Manoppello and by the Capuchins themselves, as is also demonstrated by the reproduction of the Shroud in the original size recently exhibited in the restored  Exhibit Hall of the shrine where there were also already present reasoned comparisons between the two faces while a judgment has never been made on the results of the examinations performed in 1988 by three separate laboratories (Tucson in Arizona, Oxford and Zurich) on the Carbon 14 radiocarbon dating, which attributed the cloth as being from a late medieval period, but without ever being able to explain how the image was imprinted.

Returning to the pilgrimages, significant, compared to 2010, is the presence of organized groups from the United States, with pilgrimages from Green Bay (Wisconsin), Tampa and Crystal River (Florida), Westerville (Ohio), Ypsilanti (Michigan), Hollywood ( California), etc.

Worth highlighting is the pilgrimage of a large group of people from Manchester (Connecticut), who arrived on May 19 in Manoppello, before their visit to the Shroud.  It was led by an American priest living in Rome who reported that it was Cardinal Raymond Leo Burke to suggest the trip to Manoppello.  Cardinal Burke himself had visited the shrine on two occasions.  The pilgrims from Connecticut were impressed by the Holy Face, expressing wonder and emotion. Many claimed to have seen the true face of Jesus.

Various travel operators have offered focused itineraries, as is the case with "Catholic Journeys" of New Orleans which offers a tour called "The Passion of Christ", with visits to Turin and Manoppello. Both destinations have also been offered by Mater Dei, Unitours and other operators. 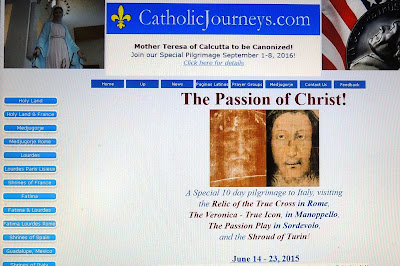 Groups from Poland, Germany and Austria were noted, as well as the presence  for the first time of groups from Burma, Singapore, the Philippines, South Korea, Malaysia, Thailand, Indonesia and Sri Lanka, which confirm the emerging interest in the Holy Face among Catholics from Asian countries. Many young people, with enthusiasm and intense faith, have approached the mystery of the Holy Face. It is believed that these presences are a reflection of the mission of the Holy Face of September of 2014, in one country, the Philippines, a reference for other Asian countries in which the presence of Catholics is very small. When it was possible to personally meet these groups it has generally been able to verify that the Asian pilgrims who arrived in Italy during the period of the exposition of the Shroud had not included Turin in their itineraries.


For many visitors and organizers of pilgrimages the Holy Face of Manoppello appears on the same level as the Shroud or otherwise the two images are perceived as complementary.  This is similarly seen in some sources of information, such as the already mentioned German magazine Der Pilger, which link the two faces together, or, at times, seem to favor the Holy Face for the immediate visual perception that is laid  without mediation before visitors whether devotees or not.  A living image that expresses its apparent uniqueness, even without special scientific supports or interpretive aids, which nevertheless are not lacking.
.
In this regard it seems interesting to note that on May 22, 2015, during the exhibition of the Shroud, the Pier Giorgio Frassati Cultural Center of Turin organized a conference with the title   “1898-2006 - The Rediscovered Face" with the participation of Raffaella Zardoni, curator of the exhibition "The Face of Jesus: From That Gaze, the Human Person is Born", which was held in the Manhattan Center of New York City from January 17 to 19, 2014 as part of the New York Encounter 2014.  The conference, during which the Holy Face was spoken about for the first time in Turin, was eagerly attended by many people among whom were volunteers at the Exhibition of the Shroud, demonstrating an attitude of openness among believers, including among those who are more connected to the Shroud, who are informing themselves about the Veil of Manoppello without prejudice.  Among those in attendance was Mario Trematore the firefighter who rescued the Shroud from destruction during the fire of April 1997.

The exposition of the Shroud ended June 24, while that of the Holy Face continues every day to welcome visitors from around the world at the Shrine of Manoppello.

Posted by Raymond Frost at 10:20 PM No comments: