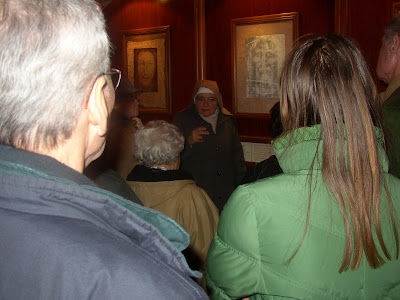 Sr. Blandina speaking to German pilgrims in November 2007 at the exhibit "Penuel" in the Shrine of the Holy Face of Manoppello

When did you begin to become interested in the Veil of Manoppello?

In 1979 I was shown a magazine article on the image of the Holy Face of Manoppello, but I did not even want to look at it, because the only authentic and true image of Jesus for me was the Holy Shroud (I had read all the German language books about it). But the look on the Face of Manoppello moved me and finally, out of obedience to Jesus, I decided to study this image which had something to do with the Lord. I read this article which was accompanied by photographs. The article stated that the image of the Face of Manoppello had the same dimensions as the face on the Shroud. This seemed to me to be untrue and, out of stubbornness, I wanted to demonstrate the opposite. So I began to study the topic which entered rather easily into my new activity of painting icons. Strangely, everything which I discovered was in favor of the Veil. I continued to compare the two images and little by little I came to find that they had to have come from the same Person: they both showed the same symmetry, the Shroud as well as the Veil of Manoppello. Then I began to believe that the Veil of Manoppello represented the authentic and living Face of Jesus. In all these years I didn't do anything other than compare the two images by means of new photographs or fotocopies. In 1991 however I was able to make the first slides of natural size and, after placing one on top of the other there appeared a perfect match of the wounds and other particulars: to sum up, the images were derived from the very same source.

Isn't it a risky thing to say to a man of our times that there exists a true image of God?

Yes! But it is necessary to say it. Above all one must say that the Holy Face is the proof, or rather the document of the resurrection of Jesus (as the Shroud is the documentation of His passion and death on the cross). The Holy Face of Manoppello, for me, cannot be the Face of Jesus before His death, because, being without a doubt the face of a living person, it shows with precision the signs of the death he underwent.

I sought out contacts with the specialists: in 1984 I sent the results of my research to professor Werner Bulst and to Father Heinrich Pfeiffer, with whom I was in close contact for many years (for entire days we spoke of the Holy Face). Professor Andreas Resch, after having read Fr. Pfeiffer's first book on the Veil of Manoppello, invited him to speak at a congress on paranormalogy. Afterwards he published articles by Father Pfeiffer and also my work. To sum up a group was formed of persons who studied the Holy Face, made up also of persons who I did not know personally.

What is your role here at Manoppello?

I am a Trappistine nun, I have asked to be able to live as a hermit in Manoppello in order to continue my studies on the Holy Face. I decided to live here because Jesus present on the Veil seemed to me to be abandoned, that there was not a community who loved Him and adored Him. It's true that in Manoppello there was and there is a community of Capuchin friars and that many of the inhabitants feel connected to this Image and love it, but there is not a community dedicated to the continuous contemplation.

What does it mean for you to stay in Manoppello and contemplate the Holy Face?

I would like to clarify something: in the beginning it was not my intention to seek out the Holy Face and to remain in Manoppello. I think that Jesus has made use of my life and that of my person to realize a divine plan, something which was completely obscure for me and of which I was a very modest instrument. I think that God Himself had wanted to reveal His Son in a new way to us His poor children of the twenty first century, and had sought out and found men and women who, knowingly or unknowingly, would collaborate in this work. For my part I can only thank those who have helped me along this path with their higher spiritual vision and their support, and also those who have sustained me with their prayer.

Turning to your question: the Holy Face is something unique. The Eucharist can be celebrated in every part of the world - for this I did not have to leave my monastery in Germany: Jesus is present in the Eucharist everywhere. However in the Veil of Manoppello He does something more: He shows Himself.

The first commandment of the believer is to love God. Love contemplates and adores. And here I am able to do it. It's true, one can always contemplate and adore in the Spirit. But God incarnate has an individual and unique Face and this Face I can only contemplate at Manoppello.

I would like for there to be formed a circle of persons to adore the human Face of God, to experience here the presence of Jesus Christ and to sing His praise.

I am so happy that now there are very many pilgrims coming here from all over the world. Recently there was also one of the faithful from Russia who came here to Manoppello and who purchased three images of the Holy Face, made in glass: one of these images, I have heard, will be given to the patriarch of Moscow. For me this is one of so many signs.

Sister Blandina Paschalis Schloemer was born on March 6 1943 in Karisbad-Aich (Germany). She entered the Missionary Sisters of the Most Precious Blood in 1962. In February of 1965 she made her first study of the Shroud. She specialized in the painting of mosaics. In 1966 she studied pharmacy in the Universities of Wurzburg and Bonn and in 1973 transferred to the order of the Trappistines. In 1976 she began the study of icons also in France. At the beginning of the 1980's she came to know about the Holy Face of Manoppello. In 1984 she contacted professor Werner Bulst and Father Heinrich Pfeiffer, experts on the Holy Shroud. In this period she began her study of comparing the Shroud and the Face, obtaining in 1991 the first "superimposition" of the two images of Jesus: the image of the Shroud and the image of the veil of Manoppello. In 1998 at the conference on the "Face of Faces" held at Rome she exhibited the 27 panels which demonstrated the full convergence of the two images. These panels now form the Exhibit "Penuel" at the shrine of Manoppello.