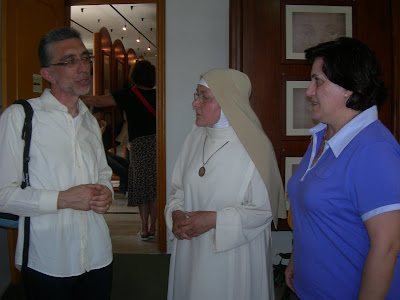 Di Lazzaro is well known for having conducted research by means of an impulse of ultraviolet light of just a few billionths of a second within a very restricted interval of the values of energy and density of power that has been able to color the surface of a linen cloth, with the same chromaticity as that of the image on the Shroud of Turin.

The results of the research, to which Professor Giulio Fanti, instructor at the University of Padua and expert on the shroud and the Holy Face also contributed, were presented in 2008 in the United States.

Dr. Di Lazzaro also organized last May, at the research center of ENEA in Frascati, an authoritative international scientific workshop on the images known as "acheropite": the Shroud of Turin, Tilma of Guadalupe, Holy Face of Manoppello. See www.acheiropoietos.info.

The scientist, who is shown in the photo above at the Shrine while in discussion with Sr. Blandina and with Dr. Francesca Esposito Bini of the Radiology Department of the General Hospital in Pescara, has affirmed that according to the research that has been conducted, the Holy Face presents characteristics which in themselves are unexplainable.
Posted by Raymond Frost at 6:51 AM