Veronica Route - A World Project for the Year of Faith

A grand map on the internet of the representations of the Veronica.  Plans also for an exhibit on "The Rediscovered Face"

A unique initiative, significant for the Year of Faith being celebrated from October 2012 to November 2013, was launched some months ago by Raffaella Zardoni, an illustrator from Milan, who came to learn about the Holy Face of Manoppello in 2010 during the exhibition of the Holy Shroud in Turin.

Her personal experience of the Holy Face of Manoppello and the hypothesis of the identification of the extraordinary image with the Veronica has brought her to imagine the creation of an exhibit which will be the fruit of a very wide searching out of the representations of the Veronica made during the years 1200 to 1600.  The exhibit will be on display during next year's Meeting (August 18-24, 2013) the annual   gathering  held each year in Rimini.

At this time it is interesting to note that Zardoni has been progressively expanding her archive of images which come from throughout the world and are to be seen on her blog
http://raffandcompany.wordpress.com/category/veronica/

The ambitious objective of realizing a kind of planetary map -- called in fact Veronica Route -- has been taking shape in a surprising way with the power offered for collaborative effort by the internet's social media network.  As I am writing there are a total of  around 600 images which have been gathered between Veronica Route and Veronica Book, with the initial nucleus taken from the book by the scholar Karl Pearson (Die Fronica, 1887)

The project aims to demonstrate the immense diffusion of these images which permits the rediscovery of how much the Roman Veronica was known and venerated in the past, a subject -- writes Zardoni -- which although it has been almost entirely ignored by the field of art history has had and continues to have significant spiritual, cultural and historical meaning in addition to its artistic importance. 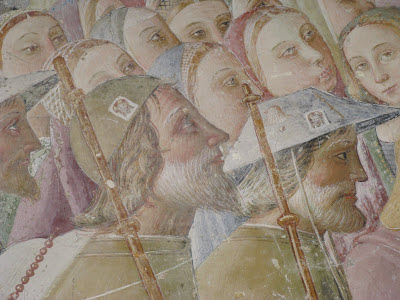 closeup of a portion of a fresco by Tiberio da Assisi showing pilgrims with the Veronica badge on their caps in Assisi listening to St. Francis 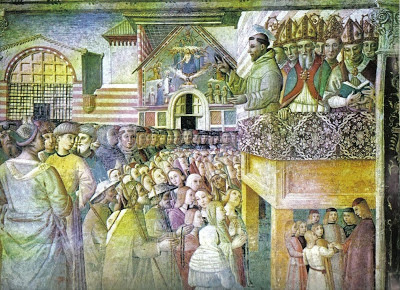 It is appropriate for us to recall the reasons for the silence which lasted for centuries regarding this image, reasons laid out by Saverio Gaeta in his book L'Enigma del Volto di Gesu' (The Enigma of the Face of Jesus) published by Rizzoli in 2010.

The oblivion  into which  the Veronica had fallen for almost five centuries was brought to an end by the exhibit "Romei e Giubilei: il pellegrinaggio medievale a Roma 350-1350" (Pilgrims to Rome and Jubilees: the medieval pilgrimage to Rome 350 to 1350) held at the Palazzo Venezia in Rome just prior to the opening of the Jubilee of the year 2000.  Central to the exhibit were documents and objects coming primarily from foreign museums, which testified to the large numbers of pilgrims which came to Rome to venerate the Veronica, even prior to the proclamation of the first Jubilee in the year 1300.  By a singular coincidence the important exposition took place less than five months time following the international news reporting on the studies of Fr. Heinrich Pfeiffer regarding the possible identification of the Holy Face with the Veronica.

As mentioned above, the research for Veronica Route has attracted the interest and involvement of a number of people.  Among these, according to Zardoni, are an englishwoman who has documented a number of images of medieval pilgrimages, other persons from Finland who have sent photos of gold rings carrying the symbol of the Veronica  and functioned as signs which rich pilgrims brought back to their country  to demonstrate their penitential trip to Rome.  Also a number of students have used part of their own free time to search out reproductions of the Veronica, the legendary sudarium upon which was impressed the face of Jesus.

This research will make a contribution to documenting and supporting the discussion which has been underway for some time on the Christian roots of Europe. The gathering together of these images will permit above all the verification of the correspondence between them and the Holy Face of Manoppello itself.

For Raffaella Zardoni the Year of Faith represents an occasion to make known the Veil of Manoppello, defined as the "Rediscovered Face", in the historic context of the Holy Years and of the pilgrimages to Rome. "The Rediscovered Face" will also be the title of the exhibit being prepared for Rimini in August, 2013.

Also by means of this article we intend to encourage the opportunity to participate in this research without borders, which seems to be taking its cue from the prophetic words written by John Paul II for the third millenium in his apostolic letter "Novo Millennio Ineunte" by means of which at the end of the Grand Jubilee of the Year 2000, in recalling the historic foundation of the figure of Christ, the Pope invited the faithful to retake their ordinary path "with their eyes fixed more than ever on the face of the Lord". An invitation which was taken up above all by his successor, Benedict XVI, pilgrim to Manoppello on September 1, 2006.


To collaborate in the research

Anyone who has information about reproductions of the Veronica (Saint Veronica and Holy Face) is invited to send the relevant references to the e-mail address below, after checking to see if the image is already present on the websitehttp://raffandcompany.wordpress.com/category/veronica/. Thanks in advance to all who desire to collaborate in the research by visiting museums, art collections, churches, sacristies, wayside shrines, etc. sending a photo and noting the artist, where possible, as well as the location and the time period of the work to raffaella.zardoni@mac.com
Posted by Raymond Frost at 5:55 PM