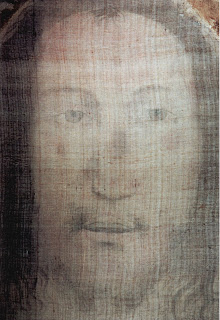 The official diocesan process has begun for the cause of beatification of Padre Domenico da Cese, Capuchin. The news, which was especially welcome to the numerous faithful who knew Padre Domenico, was communicated by the Archbishop Bruno Forte in the Cathedral of San Guistino in Chieti during the solemn Mass in honor of "Mary, Mother of the Theatine People" (translators note: Theatine is an ancient name for the people of Chieti) It was later formalized by the Presbyteral Council held in Chieti on October 17, 2013. 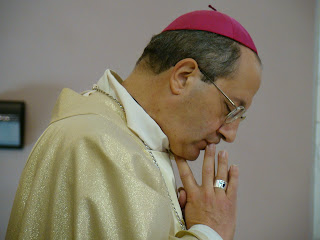 With the launch of the process, Archbishop Forte was responding to the request made by the Capuchin Order, through its Postulator General, Father Carlo Calloni, who had made use of the preparatory work undertaken in the preceding months by Father Eugenio di Giamberardino. It is the responsibility of the postulator to gather documents and direct testimony in order to reconstruct the life and the sanctity of their brother, with the objective of verifying the heroic nature of his virtues. In the case of Padre Domenico extraordinary acts have often been attributed to him that must be documented in an objective way according to the the prescriptions of canon law.

Padre Domenico - whose given name was Emidio Petracca - was born at Cese, a part of the commune of Avezzano (L'Aquila), on March 27, 1905 - and from 1965 was part of the community of friars at the Shrine of the Holy Face of Manoppello, of which he was the tireless promoter. Padre Domenico at the Exhibit on the Holy Face in Pescara

Owing to his tenacity an exhibit on the Holy Face was organized by the Shrine in September of 1977 at Pescara for the National Eucharistic Congress which culminated in the arrival of Pope Paul VI. The exhibit, which was excluded from the official program, was visited by chance by a journalist who told of this unique image in a Swiss catholic, german language periodical, creating the foundation for a new phase in the knowledge of the Holy Face beyond the regional and national confines, which later helped to bring about the very visit of Pope Benedict XVI to Manoppello.

The following September of 1978 Padre Domenico went on pilgrimage to Turin in order to visit the Shroud during its extraordinary exhibition. After visiting the Cathedral he was struck by an automobile suffering very severe injuries. While being cared for at a hospital he died on September 17, 1978.

Such circumstances required, in conformity with canon law, that the postulator general should first obtain the "nulla osta" from the Diocese of Turin, in compliance with the regulations of canon law.

For very many devoted souls Padre Domenico has been their "magnetic pole" of faith, because of his extraordinary capacity to listen and read the souls of so many suffering persons who daily turned to him with hope. Padre Domenico urged them to pray always to the "Holy Face of Our Lord Jesus Christ" as he often would inscribe to persons who turned to Him from Italy and abroad to obtain a word of consolation and hope. 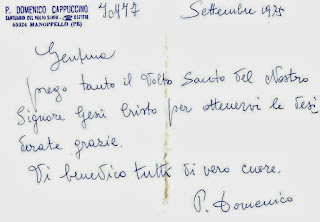 one of the many notes sent by Fr. Domenico each day to those asking for his spiritual help


And there are still so many persons who come to Manoppello in his memory and who pray to him at his tomb, in the little cemetery of his native place of Cese. Despite the years which have passed since his death, the appeal and the interest for the figure of Padre Domenico has increased with gatherings of devotees, articles, books and public events, among which we remember the initiative of the Commune of Avezzano which in honor of their native son named a street in their community after the Capuchin. We remember also the particular devotion which exists in Ruvo di Puglia and in Andria, linked to Sister Amalia di Rella, for whom Padre Domenico was a spiritual father, from which many pilgrimages to our shrine originate. For many his life seems inseparable from the Holy Face, so that he is also known as Padre Domenico of the Holy Face.

At this time it seems fit to remember the tenacious activity undertaken by Brother Vincenzo d'Elpidio and by Padre Domenico's niece Caterina and his other relatives.

The news of the initiative to launch the process for the beatification of Padre Domenico is a reason for joy for the entire Capuchin community, which will continue to be involved in the long and complex path which has begun, along with the desired active participation of the faithful.

Posted by Raymond Frost at 1:39 PM

I have turned to Padre Domenico da Cese in my prayers weekly, to ask his intercession for Devotion to His Holy Face to spread. This is wonderful and very exciting news!