Feast of the Holy Face in Manoppello 2018 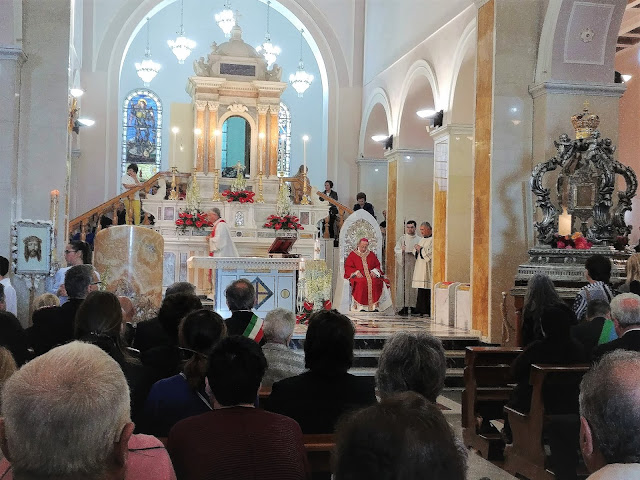 Antonio Bini writes about the celebration of the Holy Face held in Manoppello earlier today and concluding tomorrow, as always celebrated on the 3rd Sunday in May and the following day.

I send you first photos of the solemn celebration presided over by the archbishop of the diocese of Chieti-Vasto - Msgr. Bruno Forte. Despite the frequent presence of the archbishop in the Basilica of the Holy Face, that of today was his first participation at the May festival.  I also send you photos taken during the procession, which was attended by many religious, including Fr. Heinrich Pfeiffer, who made a special trip from Munich, where he now resides. His health is not very good, but he is always happy when he can return to Manoppello. Present as ever were Paul Badde and Sr. Blandina.


This year the presence of a dozen mayors of the municipalities near the town of Manoppello was recorded. The participation of the faithful was immense, which made the passage of the procession  through the streets of the historical center of Manoppello very difficult. 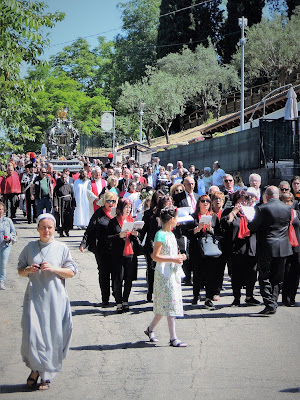 However, participation is always joyful and many people follow the procession with great devotion. 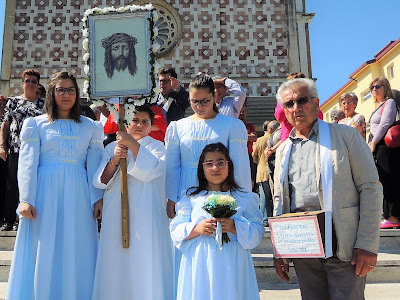 This year, two  Carabinieri in full uniform (corazzieri) accompanied the Holy Face during the procession - a circumstance that confers a civic solemnity to the event. 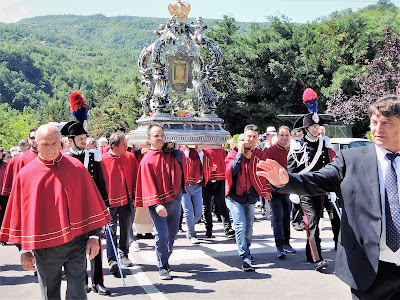 The archbishop recalled the unique reference for all Christians represented by the face of Christ. 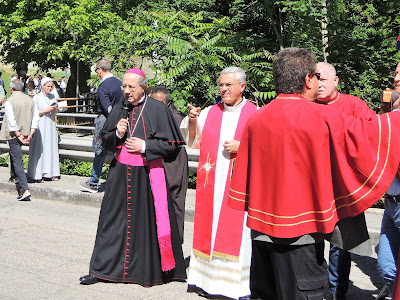 Fr. Carmine, at the end of the Mass, thanked the pilgrim companies for coming to Manoppello, including groups from Subiaco, Avezzano, Vacri, Lanciano. The arrival at the church of San Nicola was greeted by an overwhelming crowd. Many people will spend all night in vigil until tomorrow morning, when after Mass, the Holy Face will return to the Basilica.


During the lunch that took place in the Capuchin convent, I reminded the archbishop of the presence of Cardinal Tagle last year in Manoppello and therefore also of Mrs. Daisy Neves' commitment to spread the Holy Face, together with other friends. The archbishop told me he had met Cardinal Tagle a few weeks ago in Rome. He had words of great esteem for him.

Thank you, Raymond, and also thanks to Antonio Bini for the wonderful account of the day and photos! It is very edifying to see such love and devotion for the Holy Face shown through the participation of so many faithful. It looks like it was a very beautiful and blessed day!