In Jesus' farewell speeches before his Passion, Jesus provides the Apostle Philip with an answer that brings us to the very center of our Faith. After Jesus had said: "If you had known me, you would have known my Father also; henceforth you know him and have seen him." (John 14:7), Philip wonders how one might be able to see God, "who alone has immortality and dwells in unapproachable light, whom no man has ever seen or can see" (1 Timothy 6:16). Jesus answers him: "He who has seen me has seen the Father." 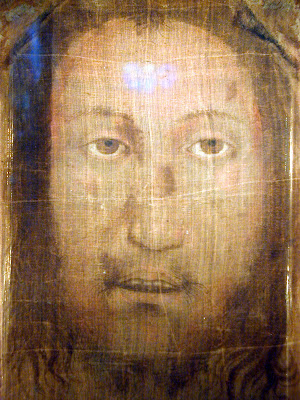 When we are thus face to face with Jesus, person to person, and gaze upon his human face, then we see in Jesus' eyes the benevolent, discerning, judging and saving power of love, which is God in the unity and communion of Father, Son and Holy Spirit. We see Jesus with our physical eyes and recognize his divine nature and power with the "the eyes of [our] hearts enlightened," (Ephesians 1:18). In the divine person of the Son of the Father, Christ's eternal divine nature and his adopted human nature are united. Only through Jesus do we come to the Father, because He alone bridges the infinite distance of the creature to the Creator. "There is one mediator between God and men, the man Christ Jesus." (1 Timothy 2:5) He is the universal, divine plan of salvation made flesh, "who desires all men to be saved and to come to the knowledge of the truth" (1 Timothy 2:4). Jesus, in his human nature, is "the way" by which "the truth, and the life" (John 14:6) were brought into this world.
The Apostle Paul calls the human nature of Christ, through which we recognize God's glory and from which we are fulfilled, the "likeness of God" – imago Dei (2 Corinthians 4:4). It is not an image of God conceived in a finite mind and made by man.

Even before the incarnation of the Word, the Son in the Triune God is the image of the being of God the Father, in the Greek words of the New Testament: "the character of his Hypostasis" (Heb 1:1). Christ is true God of true God. In the darkness of sin, which "blinded the minds of unbelievers" (2 Corinthians 4:4), God has let his light shine in the hearts of believers, "to give the light of the knowledge of the glory of God in the face of Christ" (2 Corinthians 4:6).
He, who through his word brought forth all creation, becomes a man like us, "tempted as we are, yet without sin" (Hebrews 4:15), which is what He came to deliver us from. "Since therefore the children share in flesh and blood, he himself likewise partook of the same nature, that through death he might destroy him who has the power of death, that is, the devil, and deliver all those who through fear of death were subject to lifelong bondage. (Hebrews 2:14f).

We recognize this when we look Jesus in the eye and offer ourselves to His look at us without malice. God surrounds us with his infinite mercy and in his love he goes so far as not only to die for us, but to die our death. He bore the debt of our sins until death on the cross and even took them to his grave. Death no longer has any power over Jesus and us, who form one body with Christ. And this is the creed of the Church, which Paul delivered to the Corinthians as he himself received it: "Christ died for our sins in accordance with the scriptures, that he was buried, that he was raised on the third day in accordance with the scriptures, and that he appeared to Cephas, then to the twelve". (1 Cor 15:3-5).
The Gospel of John tells of the discovery of the empty tomb. When Mary of Magdala came to the tomb early in the morning, she saw that the stone in front of the burial chamber had been taken away. And because she feared that the body had been taken away, she brought Peter and the other disciple there. Peter went first into the tomb and "he saw the linen cloths lying, and the napkin, which had been on his head, not lying with the linen cloths but rolled up in a place by itself" (John 20:6f). Peter, then, is the first witness of the empty tomb. In the apparitions of the Risen One, it is Jesus who gives him and the other apostles proof that he lives with God and that he has returned to his Father. But he has not discarded his human nature, rather living with his glorified body forever as the Word made flesh in communion with the Father and the Holy Spirit. He is the head of the body that is the Church. Through Him, as children of God, we have access to the Father and may expect the inheritance of eternal life. And the exalted Lord remains with us with his Gospels and encounters us in the sacraments of his grace. Especially in the Most Holy Eucharist he takes us into the mystery of his dedication to the Father. In Holy Communion we receive communion with Him in His flesh and blood as food and drink for eternal life. 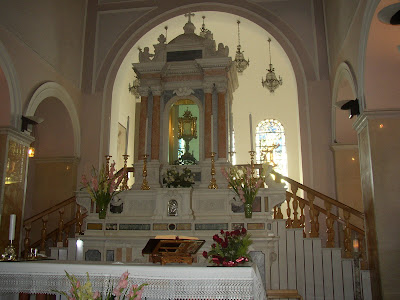 St. John Chrysostom and St. Augustine, in their comments on the Gospel of John, asked themselves why the evangelist, when discovering the empty tomb, described these trivialities, such as the linen bandages and the folded sudarium, in such detail. They were convinced, however, that the evangelist would not communicate anything in a manner so intricate if it were unimportant for our Faith.
When Jesus raised his friend Lazarus from the dead, the stone is rolled away from the outside of the burial cave. Jesus calls him out. When the deceased comes out, his feet and hands are still wrapped in bandages and his face is covered with a sudarium. But everything must be removed from him, because he cannot free himself from the bandages of death (John 11:44).
Jesus, who says of himself, "I am the life (John 14:6), rises from the dead with the power of God Himself. The stone before the tomb was taken away before the women came to the tomb. Jesus does not need to be freed from the bonds of death, because he has overcome his and our death by his own divine power.
St. Thomas Aquinas recognizes in his commentary on John a reference to the church in the relationship of the many bandages to the one sudarium "which had been on his head" (John 20:7), rolled up in a place by itself. In the Godhead united with his human nature, Christ is the head of the Church, for "the head of Christ is God" (1 Corinthians 11:3).
In Jesus Christ the goodness and loving kindness of God our Savior has appeared and shone in this world (Titus 3:3f). In his face he looks at us and wants us to respond with the love within our heart. By believing we do not adopt a theory to explain the world. The Gospels are not abstract ideas or values clothed in beautiful stories. God really became man and stays with us. Jesus is an historic person. His resurrection from the dead really did happen. He has not risen into Faith but is recognized in our faith as the living Christ, the Son at the right hand of the Father. For no one can say, "Jesus is Lord except by the Holy Spirit" (1 Corinthians 12:3).
If the historical, sacramental and ecclesial presence of the Son made man is decisive for our salvation, it is not unimportant that we also seek out His historical traces. They save us from the danger of a Gnostic and idealistic evaporation of God's human presence in this world. Without entering into scientific debates, the encounter with Christ in the imprint of His face on the Manoppello Sudarium seems to me to be of great importance for the piety of today's Christian. The uneven history of its rediscovery has come to a good end, arriving at the point of deep veneration and adoration of Jesus Christ, who as a man is the image of God, his Father and our Father in heaven.

Much remains hidden from the wise and prudent, that God however does reveal to lesser minds in the humility of Faith. Gazing into the most holy face of Jesus, as it was traced into the sudarium on his head, should give us new strength that our life may hold true in the eyes of God. For we believe and know that we will one day see God through and in Christ, the image of God, "face to face" (1 Corinthians 13:12).

Posted by Raymond Frost at 9:20 AM