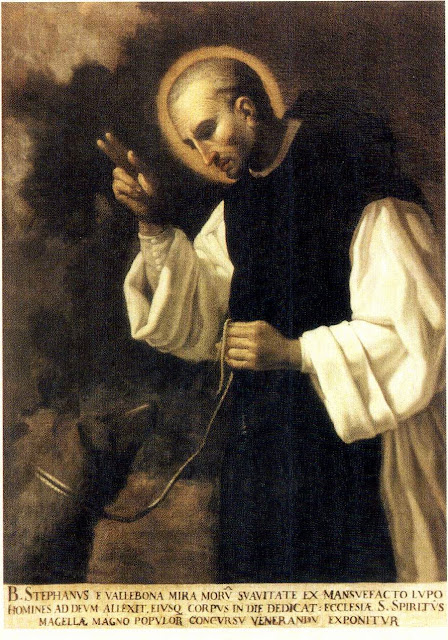 Brief history of Saint Stephen of the Wolf

The restoration of the cult of Saint Stephen Confessor, more commonly called St. Stephen of the Wolf (Del Lupo), is an opportunity to talk about some aspects of the history of the saint, whose religious life was closely linked to Manoppello.

As a young man Saint Stephen of the Wolf - born in Carovilli (Isernia) during the pontificate of Pope Paschal II (1099-1118) - was attracted - most likely -by news that came to him from the nearby Maiella mountain, at that time a refuge and asylum of saintly hermits.  Forcefully moved by the spirit of youthful hopes, Stephen arrived at the monastery of San Liberatore in Maiella, near Serramonacesca, about 6 kilometers from Manoppello.

Regarding the sacredness and spirituality of the Maiella, we remember that Petrarch, in his work "De Vita Solitaria", described the mountain as "Domus Christi", the home of Christ ...

In the thousand year old Abbey of San Liberatore - immersed in the woods at the foot of the Maiella - Stephen became a Benedictine monk.  Meditative, a lover of austerity and mortification, and strongly attracted by the hermit's solitude, in later times, with the permission of the superiors, he left the cloister of Serramonacesca to stop first in some caves and then, around the year of the Lord 1149, on the heights among the enchanting hills behind Manoppello, where Stephen founded the small and isolated monastery of S. Pietro Apostolo, later called S. Pietro in Vallebona.  His life became inseparable from the history of the monastery, in which he lived until his death.


There are not many stories concerning the saint who tradition recounts as taming a dangerous wolf, more ferocious than others, which had caused terror in the surrounding population. Further narratives also recall another incident. Stephen, who would go around with a donkey to gather firewood, was attacked by a ferocious wolf who killed the donkey. Nevertheless his fellow monks saw Stephen return with the wolf carrying the firewood on his back.

Inevitably the thought goes to the well-known episode of St. Francis and Brother Wolf, which took place in Gubbio in 1208, that is several years after the death of St. Stephen.

The presence of the wolf still characterizes the mountains of Abruzzo, and the Maiella in particular. In past centuries they were even more widespread and very dangerous, especially in winter, when wolves, which generally do not attack humans, were pushed to search for food arriving in the villages. It is no coincidence that the wolf logo today identifies the Maiella National Park.

These events lead us to reflect even today on the relationship between man and nature, which in Saint Stephen, as in St. Francis - represented a harmonious way of living and respecting creation, principles that are the prerequisites for the encyclical letter "Laudato Si: On Care of Our Common Home" "by Pope Francis.

St. Stephen died  on July 19, 1191 in the monastery he founded, surrounded by the affection of the inhabitants of Manoppello and neighboring towns. There he was buried and on his tomb the legend "Hic Jacet Corpus S. Stephani Confessorius" was carved, which highlights his charism as confessor, so many devotees were drawn to the abbey then, isolated in the impervious nature and far from the inhabited centers. Even today it is possible to reach the ruins of the abbey only by means of some footpaths through the woods.

In 1283 the Abbey was absorbed by the Celestines and aggregated to the Abbey of Santo Spirito in Maiella (Roccamorice), then the headquarters of the order. The hypothesis that Pietro da Morrone went to pray on his grave, who must have nurtured a particular devotion towards the saint, is well founded. It is certain that among the very first acts of the new pope, who took the name Celestine V, there is the papal bull "Etsi cunctos ordines", issued on September 27,  1294, by which privileges were recognized for the benefit of the Order which he himself had founded, including a list of its main monasteries, among which was the Abbey of Vallebona.

The most widespread image of the saint is depicted in the seventeenth-century painting by Carl Ruther, a Polish painter from the Flemish school and a monk belonging to the order of the Celestines, who lived in the Basilica of Collemaggio (the painting is part of the Museum of L'Aquila). This probably explains why Ruther depicted the saint in the habit of the Celestines. In other respects the same eremitical life united Stephen to the Celestines. In  following centuries the famous abbey experienced decline and then was abandoned.

In 1591, despite the resistance of the people of Manoppello the relics of the saint were transferred to the hermitage of Santo Spirito, about 30 kilometers away. Until then the cult of Saint Stephen was alive in Manoppello and celebrated annually on July 19 with a solemn procession, as Father Filippo da Tussio recalled in his monograph on the Holy Face published in 1875.

It was the strong link of the population to Saint Stephen that led - in the year 1616 - to identify in an area immediately further downstream and easier to reach, the land intended for the construction of the Capuchin friary, to which Dr. De Fabritiis will later donate the Holy Face.

Over a century ago, Father Berardino di Monticchio, learned Capuchin, in tracing the history of the Holy Face, wrote in the magazine of the Shrine (founded in 1906) that the choice of the area on which to build the new friary was much discussed, but that the decision to choose the Tarigni Hill, less than a kilometer as the crow flies further down from the ancient abbey, was unanimous.

This friary of the Capuchins remained isolated until just a few decades ago, when some homes were built nearby. The deliberate continuity of the places is confirmed by the presence in the Shrine of the relics of the Saint's arm and of Our Lady of the Snows, also from the Vallebona Abbey.

It is interesting to note that the relic of the arm was reported by the people of Manoppello as being in the Shrine of the Holy Face in the times immediately following the drafting of the Relatione Historica by Father Donato da Bomba (1640, later made public in 1646).

In 1807 the suppression of the order of the Celestines led to the abandonment of the Abbey of Santo Spirito.  Carovilli, Stephen's native village, finally got the saint's remains. A small reliquary, however, remained in the parish church of San Donato in Roccamorice, testifying to the devotion spread then among the local population. The wooden reliquary - reproducing the bust of the saint - is found there together with some relics of Celestine V, also from Santo Spirito. Testimonies on the life of the saint also refer to miracles in the area and in Caramanico.

Today the cult of Saint Stephen is alive above all in Carovilli, the town of which he is its patron. His devotion also accompanies abroad the emigrants from Carovilli  and in particular the large settlement communities in the city of Akron, in the state of Ohio (USA), where a marble bust of the saint is present in the church of Saint Anthony, and in the city of Lanús, in the metropolitan area of ​​Buenos Aires, in Argentina. To the latter community we owe the gift of the banner carried in procession to Carovilli on the occasion of the feast of the Saint. 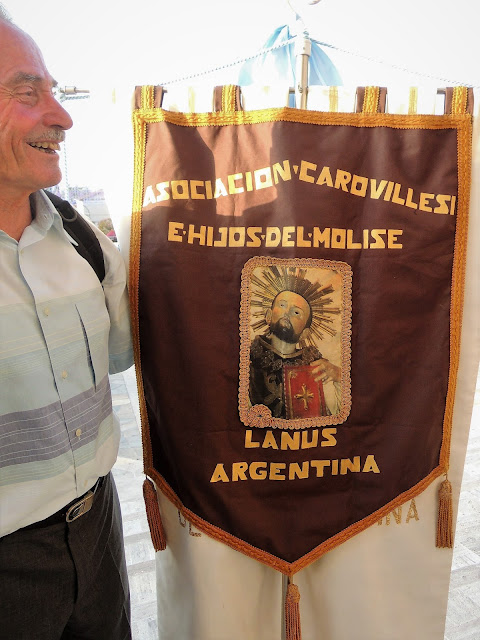 The feast is celebrated annually on July 19th, with a large popular participation. In the last edition of the feast and procession, there saw the participation of Fr. Carmine Cucinelli, together with a small group of citizens of Manoppello.

To Fr. Mario Fangio, parish priest of Carovilli, we owe the passionate work of recovering the memory of St. Stephen in the places where he founded the monastery of Vallebona and in which he matured his religious life and developed his holiness. Also to Don Mario we owe the publication of a monograph on the life of the Saint (2005), in which the results of the recognition of the relics made by the professors Luigi Capasso and Ruggero D'Anastasio of the University of Chieti was also made known. The same professors will later certify that the relics of Manoppello belong to the remains venerated in Carovilli.

Since 1983, Fr. Mario has been leading the community of Carovilli each year - at the beginning of May - in a singular pilgrimage to Manoppello to clean up the millennium old impervious path through the woods that leads to the ruins of the ancient abbey and then pray in the place where St. Stephen lived and then go to visit the nearby Shrine of the Holy Face. In 2002 the community of Carovilli proceeded to reproduce a large image of the saint placed in an artistic structure in wrought iron close to the ruins of the abbey.

Last spring the people of Carovilli have finally found a welcome different to that of previous years, with the path freed from scrub, brambles and more, thanks to the work of some volunteers of Manoppello, Venturino Febbo, Santino De Meis and Tonino Romasco: a spontaneous act that in its simplicity opens up new perspectives towards the recovery of a common memory of the saint together with the Molise community in retracing the spirituality of places that still speak to us of the charm of a natural context that appears almost unchanged from the time when Saint Stephen was alive. The same volunteers are working for the recovery of the paths that historically linked San Liberatore, Vallebona and the Holy Face, over the centuries crossed by Benedictines, Celestines and finally by Capuchins.

Thank you for sharing the fascinating spiritual history of Manoppello's Saint. I enjoyed reading it so much...a wonderful article by Antonio Bini!