The Holy Face in the Lily of a Chapel in Katowice 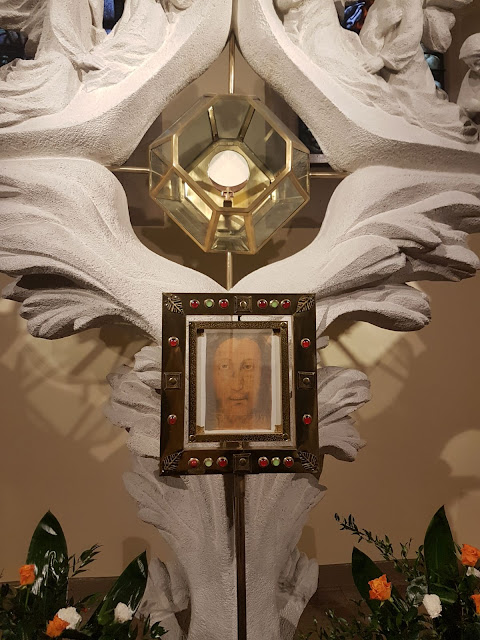 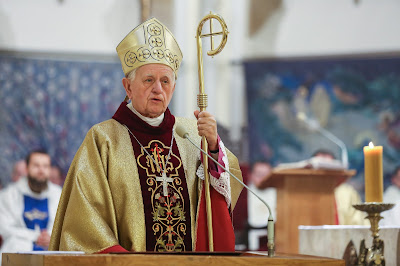 The first enthronement of the Holy Face of Manoppello in Poland was made in Katowice, in December 2015, by the hand of Archbishop S. E. Mgr. Wiktor Pawel Skworcè, in the church of the Immaculate Conception. Everything happened thanks to the interest and diligence of the parish priest Fr Andrea Suchoń and of an active parishioner, Mrs. Ewa Pasko. 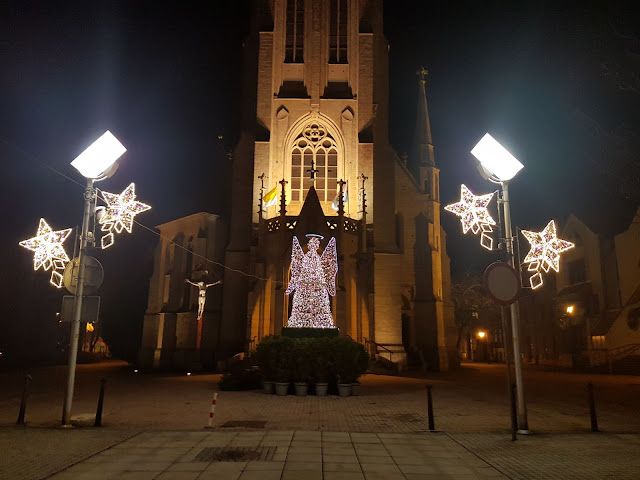 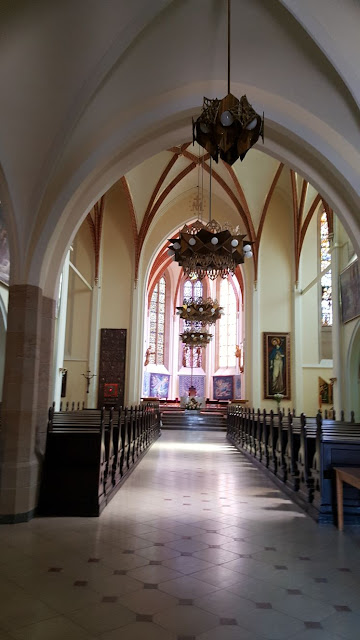 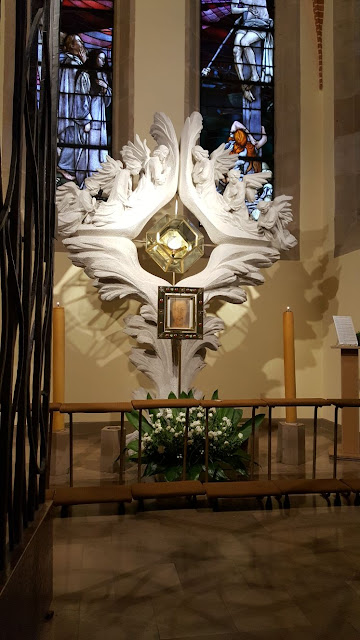 The Holy Face was placed in the Adoration Chapel (the first on the left). A local architect designed it in a unique way. He set the case to display the Blessed Sacrament in a large flower-shaped monstrance. In front, just below, he placed the framed image of the Holy Face. He wanted to show that the faithful, while adoring the Blessed Sacrament, looking at the Face of Jesus, can be helped to contemplate also the human features of his Person and to make his adoration so fruitful. The chapel is very popular with young people (the university is only a few steps away) as well as the less young, who also are coming from other parishes.

On the occasion of the solemnity of the Immaculate Conception of the Virgin Mary, patron and titular of the parish, December 8, and on the occasion of the inauguration of the recent restoration of the church, the parish priest invited the rector of the Shrine of the Holy Face of Manoppello, Fr. Carmine Cucinelli, OFM, Cap.,  to Katowice to thank him for the copy of the Image of the Holy Face which he had given and to have him meet with the whole parish. It was a pastoral visit and a short mission.

The program of the mission began at 12.00 on the day of the Immaculate with the Hour of Grace, with the prayer before the Image of the Holy Face and the explanation of the Holy Relic. A Polish Capuchin, a university student in Rome, Father Pawel Paszko, who accompanied Father Carmine from Italy, acted as interpreter. 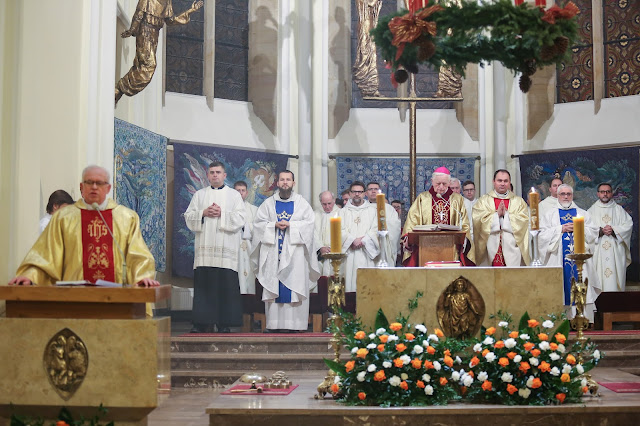 At 6 pm, after the singing of the Vespers, there was the solemn celebration of Holy Mass presided over by the Archbishop emeritus who had enthroned the sacred image, along with a dozen concelebrants.   A chasuble with the Holy Face was donated to the parish priest and a stole and a bronze medallion to the parish priest. The church was crowded with worshipers. 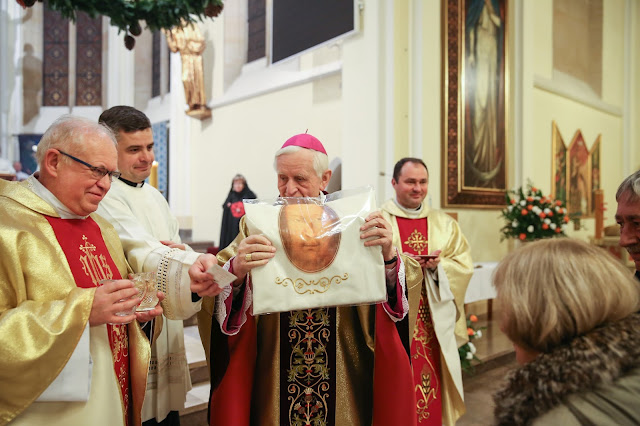 On December 9th, there was a visit to the Cultural and Spiritual Center of St. John Paul II in Krakow and a conference on the Holy Face which was broadcast on regional TV and radio. An interview was given to several journalists. Professor Zbigniev Treppa, a scientist from the University of Gdansk, author of articles and a book on the Holy Face was also present at the conference. 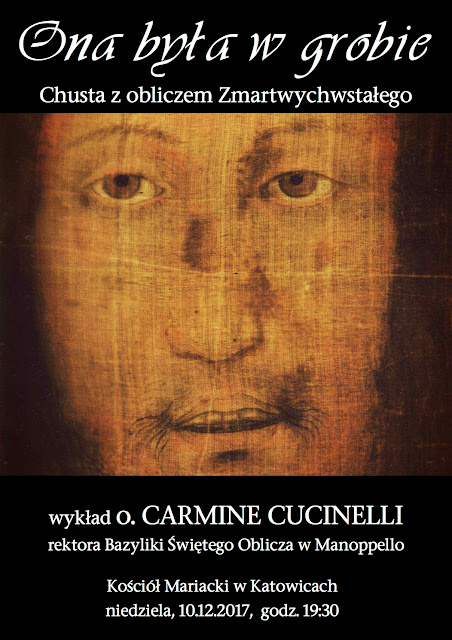 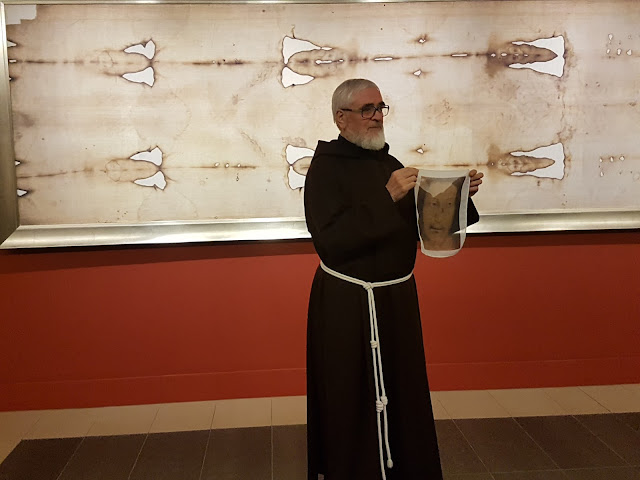 The following Sunday, again with the help of Father Pawel, the rector spoke of the Holy Face in all the Masses.On other days there was time also for devotion, visiting the Marian shrine of Czestochowa. 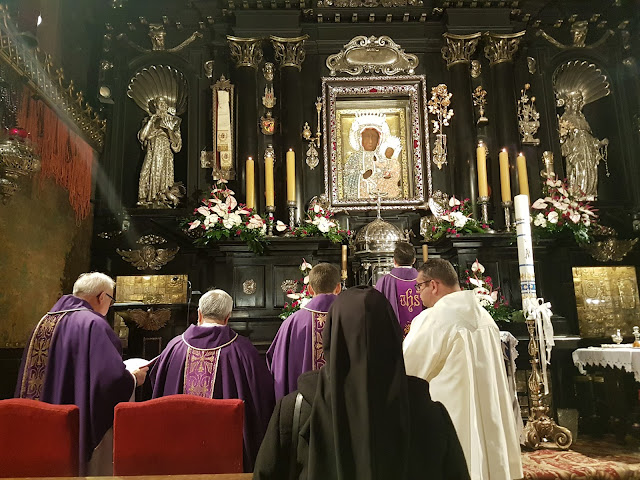 The last meeting took place in the convent of the Capuchin friars of Krakow, home to their theological house of studies.

The short week of visits to Katowice was very positive, receiving warm welcome from the faithful, who attended numerous meetings, and expressed their devotion and interest in knowing the Holy Face. Now Manoppello and Katowice are closer spiritually, because they venerate the same image of Jesus and have an equal mission, that of giving the possibility to the faithful to contemplate the "true image of Jesus" (Veronica) and bring souls to the person of Jesus .

Posted by Raymond Frost at 2:20 PM