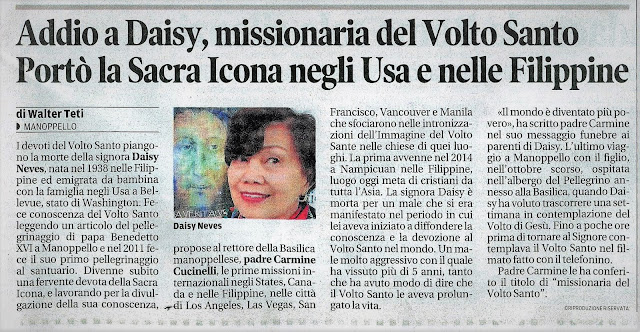 I am very grateful to Antonio Bini for sending a copy of the article by Walter Teti which appeared last week in Il Centro, the newspaper of Abruzzo, Italy.  What follows is my translation of the article.

The faithful devoted to the Holy Face are shedding tears upon the death of Mrs. Daisy Neves, born in 1938 in the Philippines and immigrant as a young child with her family to Bellevue, Washington state, in the USA.  Coming to know of the Holy Face upon reading an article about the pilgrimage of Pope Benedict XVI to Manoppello, she immediately became fervently devoted to the Sacred Icon and worked for the promotion of knowledge of it.

Daisy proposed to the rector of the Basilica of Manoppello, Fr. Carmine Cucinelli, the first international missions to the United States, Canada and the Philippines, to the cities of Los Angeles, Las Vegas, San Francisco, Vancouver and Manila, which resulted in the enthronements of the Image of the Holy Face in churches of those localities.  The first enthronement occurred in 2014 at Nampicuan in the Philippines, which today is the goal of Christians from throughout Asia.

Daisy died as a result of an illness which appeared during the period in which she began to spread in the world knowledge and devotion to the Holy Face.  A very aggressive illness, with which she lived for more than five years, so much so that she came to say that the Holy Face prolonged her life.

"The world has become poorer", wrote Fr. Carmine in his funeral message to Daisy's relatives.  During her last visit to Manoppello, accompanied by her son, she stayed at the Pilgrim Hotel adjacent to the Basilica.  She wished to spend a week in contemplation of the Face of Jesus.  Until just a few days before returning to the Lord she contemplated the Holy Face on a video she made with her cellphone.

Fr Carmine has conferred on her the tile of "Missionary of the Holy Face".

Posted by Raymond Frost at 1:55 PM