(Note:  As Archbishop Forte dedicated to St. John Paul II a great portion of his homily for the feast of the Holy Face which coincided with the 100th anniversary of the pontiff's birth, some further reflection seems appropriate about St. Pope John Paul II's influence which discreetly ensured the  re-emergence of the Holy Face back into history during the years just prior to the Great Jubilee of 2000.)


Text and Photos by Antonio Bini

The great Polish pope, at the end of the last century had become aware of the reality of the Holy Face, mainly thanks to Cardinal Fiorenzo Angelini, then president of the International Institute of Research on the Face of Christ, founded in 1997. Though he was already more than 80 years old,  the cardinal threw himself enthusiastically into this far from easy undertaking, calling on the collaboration of Fr. Heinrich Pfeiffer, S.J.,  then professor of Christian art at the Pontifical Gregorian University of Rome and member of the Pontifical Commission for the Cultural Heritage of the Church. Fr. Pfeiffer's thesis about the identification of Veronica with the Holy Face of Manoppello was presented at the first international congress promoted by the Institute.

Just prior to the second international conference, which was held on October 23 1998, the Polish pope sent Cardinal Angelini,  a message addressed to the participants in which he expressed the following desire: "May the veneration and study of the Holy Face prepare your minds for the special reflection on the Person of the Father, which the Church is setting for itself during the next year, in preparation for the great Jubilee of the year 2000", which can certainly be seen in continuity with the unforgettable appeal from the opening discourse of his pontificate  : "Be not afraid! Open, indeed, throw open wide the doors to Christ!"

Cardinal Angelini himself, named a cardinal by the Polish pope in 1991, wrote that the impetus for the Research Institute, which he founded together with the Benedictine Congregation of the Sisters of Reparation of the Holy Face of Our Lord Jesus Christ, "was suggested by the circumstance, that the year of 1997, at the will of the Holy Father John Paul II, was dedicated, throughout the church, to a special reflection on the Person of Christ." (F. Angelini, L’uomo delle Beatitudini, Editrice Velar, 2000, p. 176). Probably it was Fr. Pfeiffer himself who told me that the Pope had asked the Canons of St. Peter’s to have the Veronica from St. Peter's Basilica brought to his apartments, and then was disappointed with what he saw.

From credible sources, we know that in those years there were numerous meetings between John Paul II and Cardinal Angelini in which they often spoke of the Holy Face of Manoppello, to which the cardinal had become very devoted, with frequent visits to Manoppello. On some of these visits to Manoppello I was also present.

At the end of the Great Jubilee of 2000, John Paul II published the apostolic letter "Novo Millennio Ineunte", (January 6, 2001) in which he analyzed the intense Jubilee event just concluded.  Looking toward the third millennium he prophetically invited all to resume their ordinary path, bringing into one's soul the richness of the experiences lived, with "the gaze that remains more than ever fixed on the Face of the Lord" (cf. Section II, "A Face to Contemplate"). 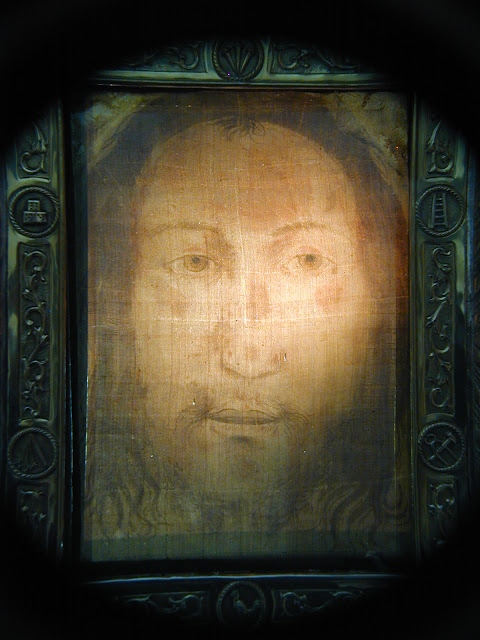 This circumstance has drawn in recent years many Poles to Manoppello, including the Polish nuns, the Handmaidens of the Holy Blood, and has brought about as well the enthronement of the Holy Face in churches of Katowice (2016) and in recent weeks in Krakow, the city to which the young Wojtyla moved at the age of 18. I also remember seeing the exceptional number of buses arriving at the shrine of the Holy Face of groups of Polish pilgrims heading to or returning from Rome on the occasion of the canonization of St. John Paul, on April 27, 2014.

According to rumors dating from the late 1990s in Manoppello, the pope was even seen coming for a brief visit to the Holy Face, without having had alerted anyone. A hypothesis not to be excluded, considering that after his death, his secretary, Cardinal Stanislaus  Dziwisz,  admitted in his book "A Life with Karol" (ed. Rizzoli, Milan, 2007), that John Paul II left the Vatican more than 100 times to travel to the Abruzzo mountains, without the Cardinal entering into descriptions of the individual excursions. Tuesdays were normally the day planned for these incognito getaways. And at that time on weekdays it was very possible to find the Shrine completely empty.

Cardinal Angelini himself, speaking at the University of Chieti, on February 10, 2006, at the international conference "The Holy Face and the iconography of the image of Christ", desired to attribute the flowering of the initiative of the creation of the Research Institute on the Face of Christ to some circumstances that he did not hesitate to call "extraordinary". These include the aforementioned apostolic letter "Novo Millennio Ineunte" by John Paul II, of "revered and holy memory". This text  should be compared with the letter "Tertio Millennio Adveniente" (November 10, 1994), about the preparation of the  Great  Jubilee, in  which the highlighted "distinctly Christological character"  was not accompanied by any reference to the Face of Christ, to understand the evolution of the thought of the Polish pope.

On that occasion,  Cardinal  Angelini  extolled the person of Fr. Pfeiffer, to whom he addressed "a greeting and a thank you to the three-times most dear Father Pfeiffer, who is a great apostle of the Holy Face of Manoppello yes, but of the Holy Face as such. A great scholar and above all a great priest and exemplary religious."

In his speech, transcribed in full in the magazine Il Volto Santo di Manoppello, No. 1, July 2006, p. 6ff, the Cardinal, speaking of the Holy Face, asserted the need to continue the thorough study of "historical facts (which are) in some ways still mysterious” affirming his personal belief that we are dealing with the Veronica, as he already had clearly stated in his preface to Fr. Pfeiffer’s book ("Il Volto Santo di Manoppello”,  Carsa Edizioni, 2000).

Further research should be done on that intense period immediately prior to the Great Jubilee of 2000. In the meantime there is little doubt that St. John Paul II belongs to the recent history of the Holy Face, as does his successor Benedict XVI.