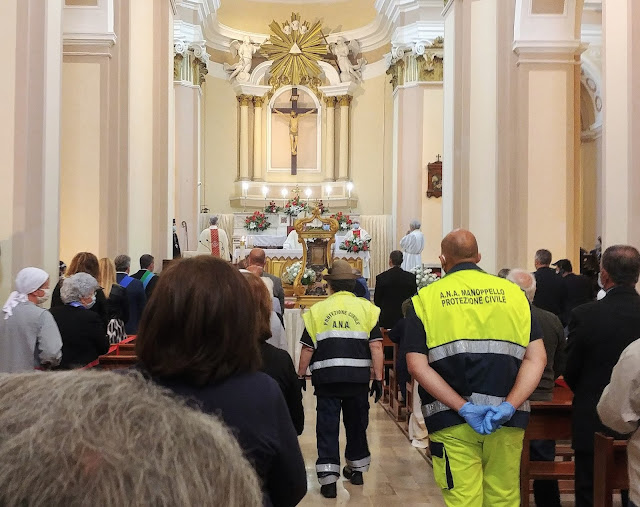 The Coronavirus Emergency Does Not Stop the Feast of The Holy Face,
On the Occasion of the Centenary of the Birth of John Paul II

text and photos (excepted as noted) by Antonio Bini

Despite the exceptional situation due to the effects of the coronavirus, the centuries-old May celebration of the Holy Face was observed this year, although without the participation of the thousands of people who ordinarily come to Manoppello for the occasion, from Italy and abroad. The festival, which traditionally takes place over two days, coinciding with the third Sunday of May, during which the Holy Face is carried in procession through the town, to  the church of San Nicola, where the sacred image had been brought by an anonymous pilgrim in the sixteenth century, while on the following day, after a prayer vigil for the whole night, the precious relic is brought back, again in procession, to the basilica.
In recent days the Mayor, the Capuchins and the local community took action as soon as the government authorities decreed the resumption on Monday May 18 of many activities and the reopening of churches, albeit with considerable limitations.  There was a strong desire to maintain the tradition, especially in view of the reopening of the churches coinciding with the second day of the festival, on which the festivities would focus.   The festival would retain its symbolic and religious essence, while all its collateral elements, proper to the civil program, such as fireworks, special street lighting, lotteries, stalls, games, and concerts would be eliminated. 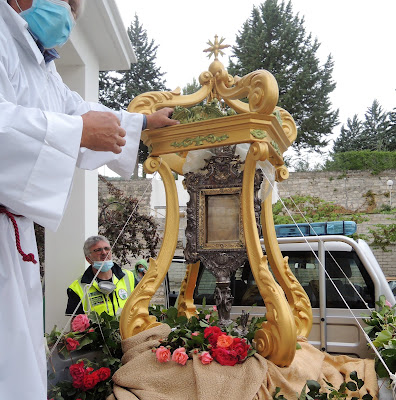 The prohibition against processions allowed for the simple transfer of the sacred image from the Basilica to the Church of San Nicola, by means of a small motorcade, with a jeep from the carabinieri at the head, then the car of the rector of the Sanctuary, Fr. Carmine Cucinelli, followed by an open vehicle, on which was placed the Holy Face, provided by volunteers among the mountaineers (alpini) from the Italian ministry of Civil Protection , with an additional vehicle of the same volunteers completing the procession. 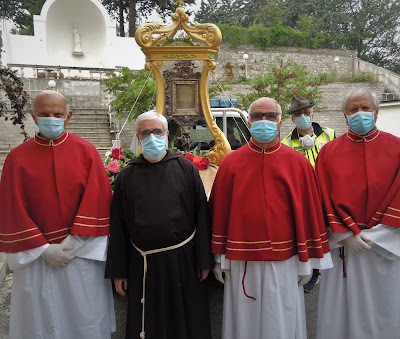 I was able to follow the preparatory stage of the motorcade, noting the loving care given to the details, with the arrangement of blankets on which to rest the antique wooden throne, with the arrangement of flowers and colored ribbons, which were added to the safety tie rods.  (This historic throne was preferred to the one in use for decades, much heavier and bulkier and which also includes a Plexiglas security "cage")
Incidentally, some of the volunteers of the Civil Protection, are also volunteers of the Holy Face. A slight drizzle accompanied these preparations which ended just before the departure of the motorcade.

On the way from the Shrine to the village some people, well spaced out and scattered along the route, waited with emotion for the passage of the small procession, which at around 9.30 arrived at the Church of San Nicola, with the Holy Face welcomed by prayers and songs.


Under the current government provisions, according to the square footage of the church, it was possible to allow access to only 68 people, equipped with passes, while also the population was asked not to congregate along the narrow Corso Santarelli , avoiding gatherings, another word which has entered into the chronicles of this period. However, it was possible to listen to the celebration from speakers mounted outside the Church. 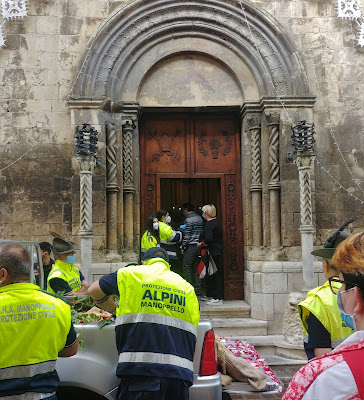 At the entrance to the church, volunteers took the temperature of those entering, while the church space was marked off by red ribbons arranged on the rows of the benches, making available only the seats at the end of the row. Gloves were distributed to those present and hand sanitizer made available. A surreal atmosphere, but also of particular emotion, with the religious, government officials and public with masked faces and with the church crowded with carabinieri and especially by the volunteers from the Civil Protection.  The tradition of the night vigil was also maintained, as if the Holy Face were present, throughout the time between Sunday evening and Monday morning in the church of San Nicola, through the efforts of Sister Blandina Paschalis Schlömer. and three others. 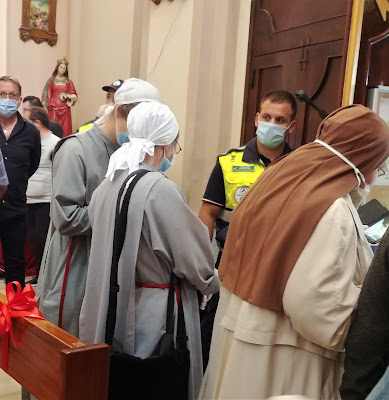 Archbishop Bruno Forte at the beginning of the solemn Mass recalled those who are suffering and have suffered from the coronavirus infection and especially for those who have lost their lives. He also addressed a greeting to those who could follow the celebration via livestreaming on the Facebook pages of the Shrine and the Municipality of Manoppello, while in the regional area the celebration was broadcast live by Rete 8. Father Anatoliy Grvtskiv, representative of the Greek Orthodox Church, an expression in Abruzzo and Molise of the Ecumenical Patriarchate of Constantinople, was also present at the celebration. 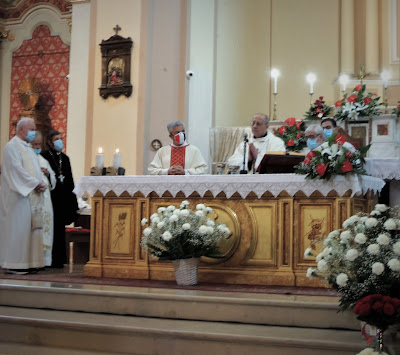 Referring to the traditional May procession, the Archbishop emphasized its happy coincidence with the centenary of the birth of St. John Paul II, recalling in particular the dialogues he had with him during the spiritual exercises of 2004, the last of St. John Paul II’s earthly life.

At the conclusion of his homily the Archbishop wished to recall the prayer recited by St. John Paul
II during his pastoral visit to the Archdiocese of Lucca (23-24 September 1989), the city where a
wooden crucifix revered as the Face of Christ is preserved. St. John Paul II "pronounced words" –
continued Archbishop Forte – "that we can address with humility and love to the Holy Face
imprinted on the sudarium, venerated in this place"

"Lord Jesus, crucified and risen, image of the glory of the Father, Holy Face who looks at us and scrutinizes us, merciful and meek, to call us to conversion and invite us to the fullness of love, we adore you and we thank you. In your luminous Face, we learn how we are loved and how we are to love; where freedom and reconciliation are found; how to become builders of the peace that radiates from you and leads to you.


In your glorified Face we learn to overcome all forms of selfishness, to hope against all hope, to choose the works of life against the actions of death. Give us the grace to place you at the center of our lives; to remain faithful, amidst the perils and changes of the world, to our Christian vocation; to announce to the peoples the power of the Cross and the Word that saves; to be alert and hard working, attentive to the least of the brethren; to grasp the signs of true liberation, which has begun and will be fulfilled in you.


Lord, grant your Church to stand, like the Virgin Mother, at your glorious Cross and at the crosses of all men to bring consolation, hope, and comfort to them. May the Spirit you have given us bring to maturity your work of salvation, so that all creatures, freed from the constraints of death, may contemplate in the glory of the Father your Holy Face, which luminously shines for ever and ever. Amen.

At the end of Mass Archbishop Forte decided to personally read the prayer in English and German for those who were online from abroad.  The celebration having concluded with a moving and prolonged applause, the Holy Face made a speedy return to the Basilica accompanied along the way, as always, by the residents showering rose petals and displaying their finely embroidered blankets and draperies from the balconies of the town. 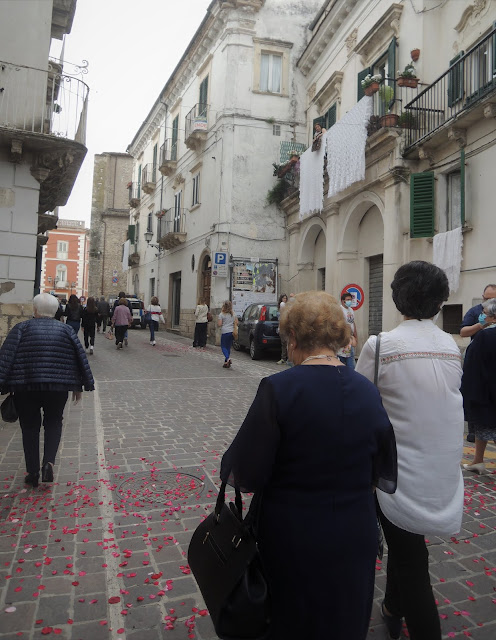